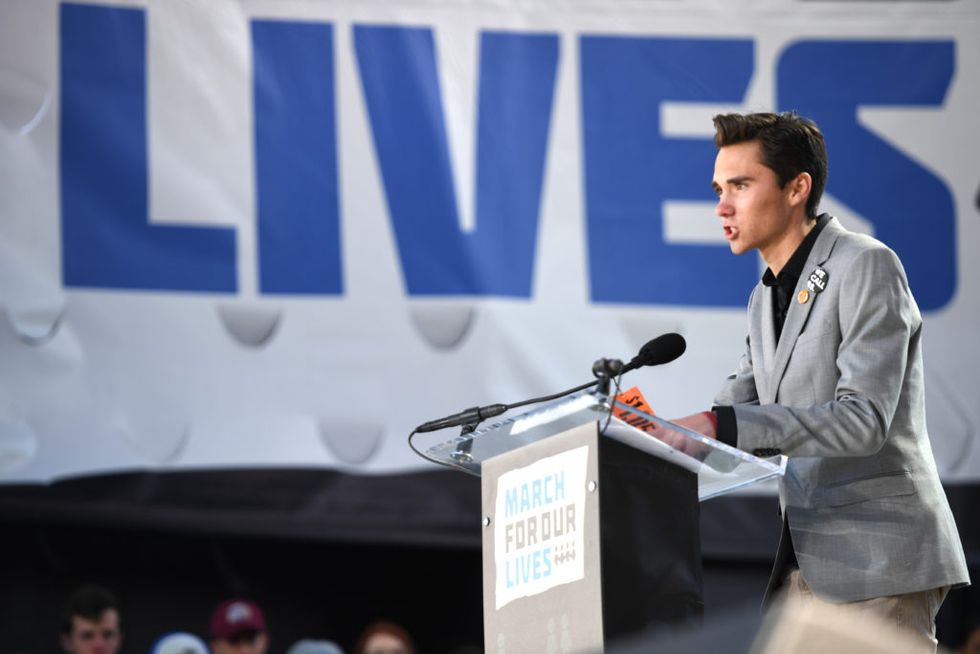 Marjory Stoneman Douglas High School student David Hogg addresses the crowd during the March For Our Lives rally against gun violence in Washington, DC on March 24, 2018. Galvanized by a massacre at a Florida high school, hundreds of thousands of Americans are expected to take to the streets in cities across the United States on Saturday in the biggest protest for gun control in a generation. / AFP PHOTO / JIM WATSON (Photo credit should read JIM WATSON/AFP/Getty Images)

David Hogg, the student activist and survivor of the Valentine's Day massacre at Marjory Stoneman Douglas High School turns 18 today, which means he will finally be able to vote.

He's using Twitter on his 18th birthday to say that he is excited to vote in the upcoming midterm elections and is encouraging other young people who are of age to vote, too.

A Twitter troll immediately pounced on Hogg, who has led a nationwide gun control movement after a gunman murdered 17 of his classmates and teachers at Marjory Stoneman Douglas High School in Parkland, Florida this past Valentine's Day.

"I'll be canceling out your vote, happy birthday!" @elisabethlehem said to Hogg.

Hogg quickly fired back in the classiest way possible, reminding everyone that the act of voting is more important than the candidate for whom a ballot is cast. He then thanked his digital adversary for engaging politically.

That's totally ok regardless of your beliefs I think we should all get out and make our voices heard by voting! So thank you for being politically active.

Hogg's exchange ignited a further spat between "elisabeth" and another Twitter user, who came to Hogg's defense by saying he wishes his son was 1/100th the man Hogg has become.

My son is about to turn 18. If he could be 100th of what you are I’d be even more extremely proud.

She immediately fired back. "Wow. What a great dad you must be. Who TF says that about their kid?"

"And that’s why David will change the world and you’ll just be a troll," Brett Maxwell replied.

Hogg and other student survivors of February's shooting have inspired hundreds of thousands of students, activists, and parents to become politically engaged on the issue of gun safety. Shortly after the shooting, MSD students started the March For Our Lives movement, which promotes common sense gun safety measures that many believe can help prevent the next mass school shooting.

The leadership of MSD students has had legislative effects in Florida. Last month, the Florida State Legislature passed a bill that implemented a three-day waiting period to buy a gun, raised the age of purchasing a firearm from 18 to 21, and allowed for certain school faculty members to be armed and trained in gun safety. Florida's Republican Governor Rick Scott signed the bill into law shortly after its passage.

Hogg was singled out by conservative talk show host Laura Ingraham last week, who mocked the high school senior for being rejected by some of the colleges to which he applied.

As of yesterday, more than 25 advertisers have abandoned Ingraham's show.

On Wednesday, Hogg asked outgoing House Speaker Paul Ryan to hold a floor vote on universal background checks. The vast majority of Americans support doing so, and since Ryan is not seeking reelection, there is no political capital being risked by holding a vote.

over 90% of Americans support it why not allow a vote on it? Tweet your support with #AllowTheVote