David Hogg Just Tweeted What to Expect From Politicians in the Wake of Another School Shooting, and They're Already Proving Him Right 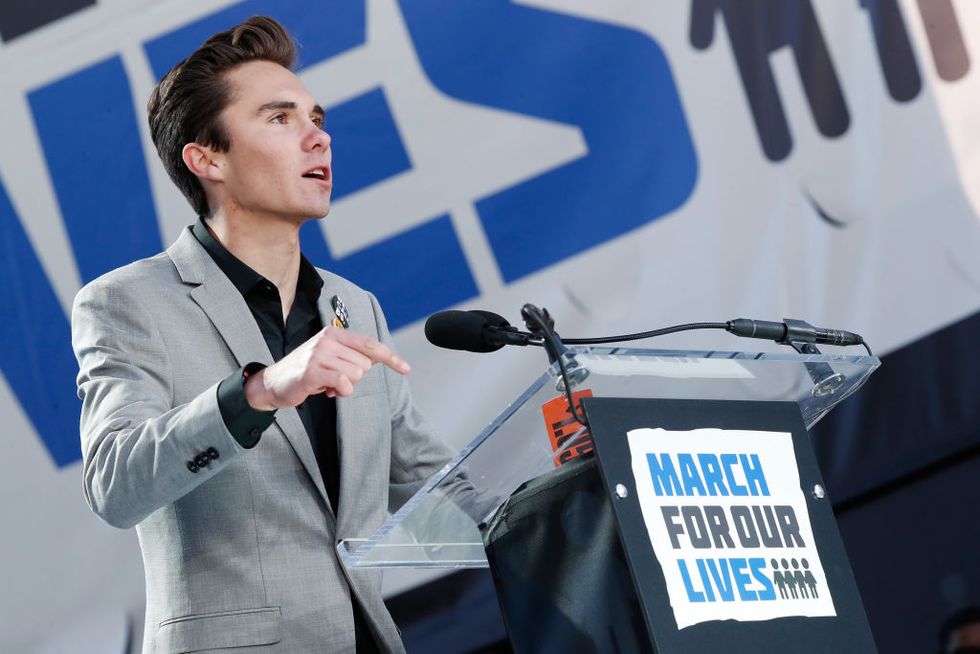 Parkland school shooting survivor David Hogg used his Twitter account to slam politicians for their inaction on mass shootings in the wake of yet another school shooting. At least ten people were killed after 17-year-old Dimitrios Pagourtzis stormed Santa Fe High School, 35 miles from Houston, Texas, with assault weapons.

“Get ready for two weeks of media coverage of politicians acting like they give a shit when in reality they just want to boost their approval ratings before midterms,” Hogg, who has become an outspoken advocate for gun control since surviving the massacre at Marjory Stoneman Douglas High School, wrote on Twitter.

Hogg directed his criticisms toward a litany of politicians who took to Twitter to share the same messages offering "thoughts and prayers" after mass shootings occur.

One of them was Vice President Mike Pence, who wrote: "To the students, families, teachers of Santa Fe High School, all of those affected and the entire community: We are with you, you are in our prayers, and you're in the prayers of the American people."

Another was Ted Cruz, a Senate Republican who is gearing up for re-election.

"Heidi and I are keeping all the students and faculty at Santa Fe High School in our prayers this morning, along with all first responders on the scene," Cruz wrote. "Please be safe and heed warnings from local officials."

Heidi and I are keeping all the students and faculty at Santa Fe High School in our prayers this morning, along wit… https://t.co/eF9UBvM3Q3
— Senator Ted Cruz (@Senator Ted Cruz) 1526651864.0

And yet another was President Donald Trump himself.

"We grieve for the terrible loss of life, and send our support and love to everyone affected by this horrible attack in Texas," the president's message reads. "To the students, families, teachers and personnel at Santa Fe High School – we are with you in this tragic hour, and we will be with you forever..."

We grieve for the terrible loss of life, and send our support and love to everyone affected by this horrible attack… https://t.co/05tDoyLLzu
— Donald J. Trump (@Donald J. Trump) 1526661264.0

All three of these men issued similar messages following the Stoneman Douglas shooting.

Cruz, in particular, was called out by Shannon Watts of Moms Demand Action for Gun Sense in America. Watts reminded her followers that Cruz, for all his talk of thoughts and prayers, "voted against universal background checks" after the 2012 Sandy Hook shooting.

This Santa Fe High School press conference by three A-rated @NRA lawmakers is something: “We must do everything po… https://t.co/TUIllHfdAc
— Shannon Watts (@Shannon Watts) 1526671180.0

"There is nothing wrong about praying for victims & first responders at the school shooting at Santa Fe High School in Texas. We should pray for them. But there is something very wrong if that is all you do," he wrote.

There is nothing wrong about praying for victims & first responders at the school shooting at Santa Fe High School… https://t.co/caFfiUvS25
— Ted Lieu (@Ted Lieu) 1526661356.0

Cruz, noted another Twitter user, received an A+ rating from the NRA and "has accepted $77,450 in campaign donations from them this year."

Texas Governor Greg Abbott offered some of the same during a news conference in which he confirmed the shooter's identity and that explosives had been found around the school.

The shooter "has no criminal history," he said. "His slate is pretty clean," he added, noting that the events leading up to the shooting lacked "the same kind of warning signs."

Several politicians agreed that the time for "thoughts and prayers" had long come to an end.

"We must act to keep our schools and our children safe. Words of condolence are not enough," wrote Representative Adam Schiff (D-CA).

Horrified by the shooting in Santa Fe that took the lives of 9 students and a teacher. Their families, hundreds of… https://t.co/K6qubpgUgx
— Adam Schiff (@Adam Schiff) 1526668870.0

"We cannot allow this to continue. We must say #NeverAgain with our actions, not just our words," wrote Representative Elijah Cummings (D-MA).

"How many more families and communities must grieve?" asked Senator Kirsten Gillibrand (D-NY). "Enough is enough."

Indeed, school shootings have become so commonplace that it seems inevitable that politicians will offer their "thoughts and prayers" before business proceeds as usual.

A student who survived today's shooting told a reporter that she, in fact, expected a shooting would happen at her school.

It was only a matter of time.

"It's been happening everywhere," she said. "I've always kind of felt like eventually it was going to happen here too."

Heartbreaking moment as Santa Fe High School student is asked if she thought a shooting 'would not happen' at her s… https://t.co/SVx8QOkJEw
— ABC News (@ABC News) 1526662751.0

The school students participated in the National School Walkout last month to protest legislative inaction amid gun violence in schools. Students described a scene of utter chaos; one student said she merely "ran as fast as I could."

"I just ran as fast as I could" - Santa Fe High School students describe shooting incident in Texas that has left u… https://t.co/Ek2vfRZaMo
— BBC Breaking News (@BBC Breaking News) 1526660956.0

Another student described "about 30 seconds to three minutes of just straight chaos, everyone crying, like, 'we're going to die,'" said student Damon Rabon.

Dimitrios Pagourtzis is being held on capital murder without bond. Additional charges may follow, according to the Galveston County Sheriff’s Office.