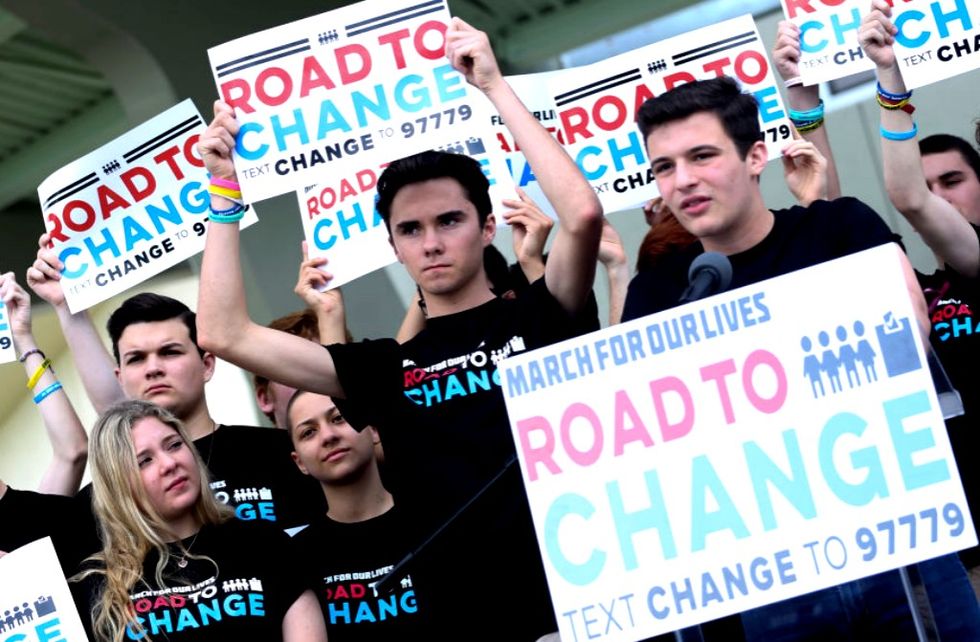 Parkland shooting survivors Emma Gonzalez, David Hogg and Cameron Kaskey hold a press conference for the March for Our Lives movement on Monday, June 4, 2018 at the Pines Trails Park in Parkland, Fla. They announced a 20-state tour dubbed "The March For Our Lives: Road to Change," where they plan to meet with young voters and campaign to end gun violence. (Ellis Rua/Miami Herald/TNS/Getty Images)

As reported Tuesday, all 8th grade students at St. Cornelius School in Chadds Ford, Pennsylvania, received bulletproof inserts for their backpacks as a graduation gift. The gifts came from the inventor of the product.

All eighth graders at a Pennsylvania school were given a bulletproof Safe Shield insert for their backpacks as a gr… https://t.co/kTe4vZRNSx
— NBCWashington (@NBCWashington) 1528191909.0

While it might be said that the gift is simply a reflection of the times we live in, should it be? Is this our new normal?

At least one voice says no. Parkland school shooting survivor David Hogg responded to the story on Twitter, stating:

To my fellow young people, will will not let this be our kids’ graduation present."

Hogg and his fellow students began a campaign to end gun violence after the Valentine's Day shooting at their school, Marjory Stoneman Douglas High School in Parkland, Florida, took the lives of 17 people.

After organizing a school walk-out one month after the shooting and marches around the globe March 24, 2018, the next step for the group includes registering young voters. To that end, Hogg and other leaders of the March for Our Lives organization plan to tour the United States holding voter registration events.

A prominent theme in the groups work, "The Young People Will Win" shows up throughout their tweets and other social media presence. The slogan features prominently on Hogg's Twitter profile.

The group and slogan address the fact that little substantive happens after school shootings. Deciding enough was enough, the students took on the National Rifle Association and the gun industry.

Their desire is to move beyond thoughts and prayers for victims of mass shootings to real changes in how the United States attempts to curb gun violence. Their website, named for their March 2018 march, provides ways for people to take action and a link for registering to vote.

However Hogg and the rest of the student activists borne from the tragedy at their school are not without their critics. Conservative media personalities make it a habit to attack the students, just as they attacked, and continue to attack, the parents of the children murdered at the Sandy Hook elementary school in 2012.

Hogg and Emma Gonzalez are two of the more outspoken leaders and the biggest targets both online and in real life.

On a day that Hogg was in Washington D.C. receiving an award, someone called in a fake hostage situation at his family's home in Florida as a sometimes deadly prank known as swatting. Armed SWAT teams are usually deployed to active hostage situations.

As usual, Hogg's tweet about the normalizing of bulletproof accessories for school children drew online rage from some of his 821,000 Twitter followers. A percentage of those follow simply for opportunities to troll the young man who recently graduated from high school and just turned 18 in April.

However the trolls are in the minority on this thread as most people were shocked about supplying children with bulletproof school supplies.

@davidhogg111 Did the PENNSYLVANIA SCHOOL DISTRICT also give the 8th graders a bucket of rock to throw at the shoot… https://t.co/WAPYcdgVWr
— eclipticwatcher (@eclipticwatcher) 1528220908.0