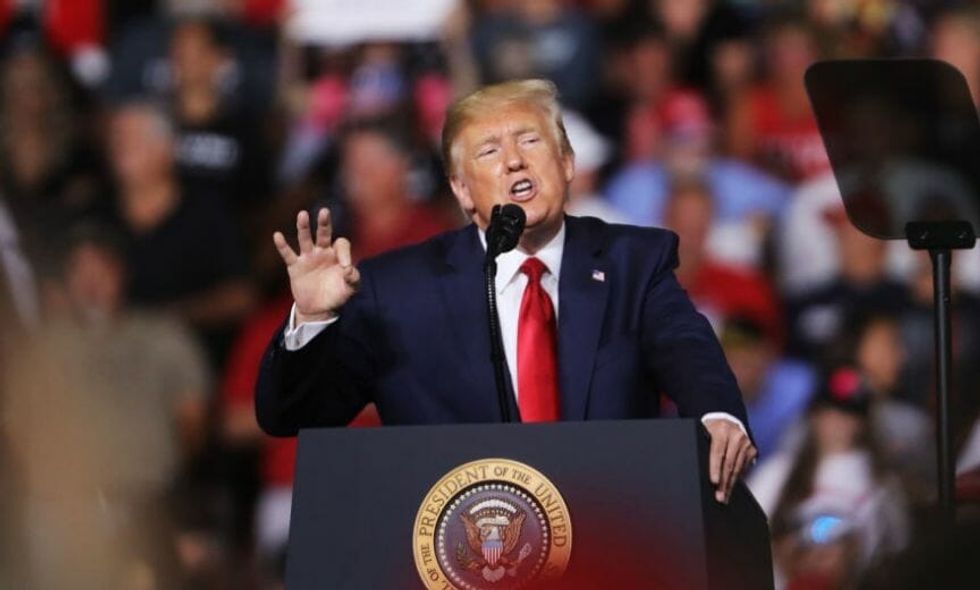 At a campaign rally on Thursday night, President Donald Trump told a slew of lies about everything from pre-existing conditions to oil production to former Secretary of State Hillary Clinton's electoral votes in the 2016 election.

While no one in particular was surprised that Trump told a lie, one of the lies stood out: he claimed to have won Michigan's Man of the Year.

"In fact, five or six years before I even thought about running, for whatever reason they named me Man of the Year in Michigan. I said, 'How come?' I didn't even understand it myself. When I was named Man of the Year, I wasn't even political. That was years before I did this. But I was always complaining that our car business is being stolen."

According to CNN fact checker Daniel Dale, Trump has made this claim at least seven times since 2016, but there's no evidence that this ever happened or that the award even exists.

Dale grew more flummoxed at the odd claim, but soon got closer to the origin thanks to former Congressman Dave Trott [R-MI].

Trott adds that the speech was well-received. He also adds that Trump insisted he had to tell the press that it was… https://t.co/aVJw2dzBJU
— Daniel Dale (@Daniel Dale) 1565977731.0

According to Trott, Trump spoke at a Lincoln Day round table, but appeared to think he'd been awarded something. Trump thanked him for the honor, but Trott didn't correct him because they were in front of CEOs in Congress.

What's more, this wasn't just Trump mentioning off-the-cuff that he won an award that didn't exist. He's talked about his acceptance speech in detail, as Dale noted in 2016.

If this is fake, it's amazing - he talked in detail about the acceptance speech he delivered upon winning https://t.co/ZhpcoFRXgM
— Daniel Dale (@Daniel Dale) 1478501226.0

While Daniel Dale's tireless sleuthing is appreciated, people weren't exactly surprised that Trump appears to have made up an award.

@ddale8 Keep it up! And also, how profoundly and absolutely mindbogglingly dangerous it is to have such a shameless… https://t.co/3SMdDshTr2
— Alex Muñoz (@Alex Muñoz) 1565978038.0

After all, who remembers when the president hung a fake Time Person of the Year cover in his Mar-a-Lago resort?

Still love that Trump had this fake Time Magazine cover made to display at one of his properties and has the nerve… https://t.co/ainYPk98O6
— Josh Jordan (@Josh Jordan) 1512883025.0

But it's millennials who demand trophies.