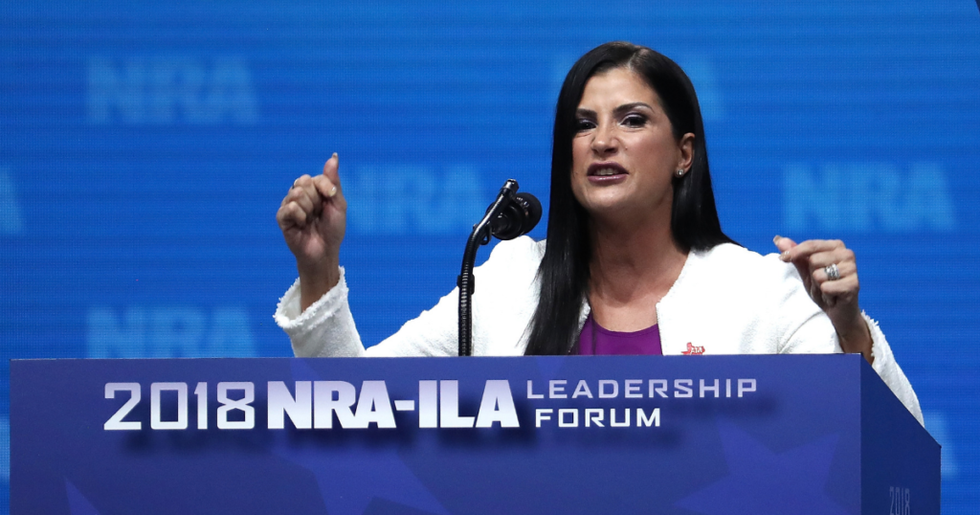 "What happened was horrific," Loesch tweeted Thursday morning. "Evil is real. So are CA gun laws." Loesch then listed all of the supposed "evil" elements of California's state firearm regulations, none of which are extreme or excessively prohibitive.

Loesch's tweet was a reply to New York Times reporter Nicholas Kristof, who noted: "these kinds of incidents don't happen in normal countries where there is some reasonable regulation of firearms, starting with universal background checks."

When challenged over how to keep guns out of the hands of those who harbor ill-will, Loesch didn't have a solution.

@c_culper @DLoesch I’m sure that happens. But these weapons have a killing efficiency not matched by more blunt wea… https://t.co/H1lmsxlplG
— John Kessler (@John Kessler) 1541688148.0

Her callousness was not welcome.

@DLoesch Seems your point is there is nothing else to be done, we just live with these horrific events. Otherwise… https://t.co/Z0xS5gONhX
— AccaDaccca (@AccaDaccca) 1541689041.0

As the NRA's public liaison, Loesch is one of the gun lobby's most powerful voices.

@pedroorrego1 @DLoesch @sdun44 It is about defending the profits of the gun industry. Individual gun owners are jus… https://t.co/eyFcwuPhAB
— Son of Socialism (@Son of Socialism) 1541688535.0

Loesch, having offered no evidence to support her claims that gun control causes mass shootings, was confronted with the inconvenient truth that states with stricter firearm rules have fewer gun-related deaths.

@DLoesch Which of these do you find offensive to law abiding Americans? Maybe you want us to allow people without t… https://t.co/dWsyKD7kvb
— Linda K (@Linda K) 1541688860.0

And that the one "good guy with a gun" was among those killed.

Would Loesch prefer guns in bars?

Perhaps Loesch should listen to the eyewitness accounts of the latest mass shooting to cripple the country.

The scene at Borderline Bar & Grill Wednesday night was described as "horrific" by first responders.

A 28-year-old gunman entered the bar, a local hotspot enjoying "College Country Night," and opened fire with a handgun. He was found dead inside the bar.

“It’s a horrific scene in there,” Ventura County Sheriff Geoff Dean told reporters. “There’s blood everywhere. The suspect is part of that.”

Dean said the violence “is part of the horrors that are happening in our country and everywhere, and I think it’s impossible to put any logic or any sense to the senseless.”

Helus "died a hero,” Dean said, “because he went in to save lives."

President Donald Trump shared his condolances for the victims on Twitter and praised local law enforcement for their swift response.

I have been fully briefed on the terrible shooting in California. Law Enforcement and First Responders, together wi… https://t.co/c2ncb4FcJQ
— Donald J. Trump (@Donald J. Trump) 1541680721.0

Witnesses and survivors described to what happened inside the bar as the shooting began.

The Washington Post chronicled some of the first statements from those who were there.

“It was sheer panic,” said Teylor Whittler, 19, who was inside. “Everyone ran and dropped as fast as they could.”

“And then all, of a sudden," she added, "a couple of guys started running to the back door and said, ‘Get up he’s coming.'”

Matt Wennerstrom, 20, said the shooter was a "tall figure" wearing "all dark clothing" who initially targeted employees working behind the bar.

“At that point," Wennerstrom recalled, "I grabbed as many people around me as I could and pulled them down underneath the pool table that we were closest to until he ran out of bullets for that magazine and had to reload." He said he was able to push "30 or 35 people" out of the bar through a window shattered by a bar stool.

Others recounted how they were able to escape

“He fired the first shot,” a stepfather who was at the bar with his stepson said. “And I knew it was real. My son thought it was a joke, so I pulled him down and got some cover. I looked up, and he was moving to the right. He shot the front doorman, who was just a young man. Then he shot the cashier, just a young girl.”

Rachel Hammons, 24, said she made a break for the exit as soon as she had the chance.

“You’ve got to hurry, you’ve got to get in there,” she urged police, having watched them swarm the premesis from her car.