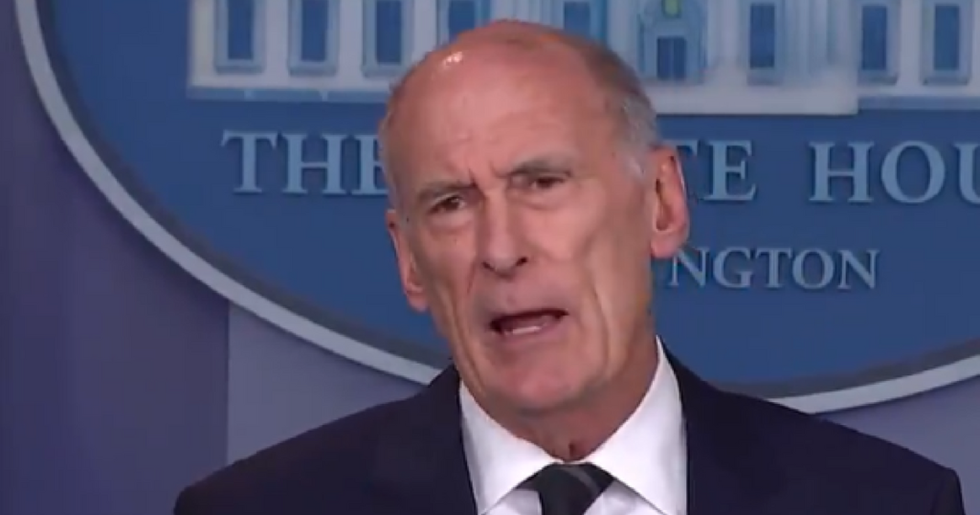 Director of National Intelligence Dan Coats made a startling admission during a White House press briefing on Thursday, telling reporters that he really doesn't know what was discussed between U.S. President Donald Trump and Russian President Vladimir Putin when the two met in Helsinki last month.

"I'm not in a position to either understand fully or talk about what happened in Helsinki."

National Intelligence Director Coats: "I'm not in a position to either understand fully or talk about what happened… https://t.co/qSJYpFR0Ec
— NBC News (@NBC News) 1533233288.0

When pressed on how he plans to combat ongoing Russian election interference in the face of Trump's assertion he challenged Putin on what is now an indisputable fact, Coats was unable to offer any insight into what Trump and Putin discussed.

"I'm not in a position to either understand fully or talk about what happened in Helsinki," Coats said. "I'll turn it over to the national security director here to address that question." Coats then handed things off to National Security Advisor John Bolton.

"The issue was discussed," Bolton claimed.

Aside from the assurances of Trump, who has waffled on whether or not he even believes Russia attacked the 2016 presidential election with the aim of getting him elected, and the word of Putin, who has denied having anything to do with subverting American democracy, there is no verifiable evidence of what the two leaders actually talked about.

Bolton, it seems, is also relying on Putin's word.

The Twitterverse was understandably vexed that Trump's top intelligence chief would be in the dark about what he discussed with the Russian autocrat.

@NBCNews Nobody knows what happened in Helsinki or if Trump sold us out. It's a new low in American Diplomacy
— Upton Bell (@Upton Bell) 1533233567.0

@NBCNews Why was @realDonaldTrump a person under investigation for Obstruction of Justice, election tampering, & po… https://t.co/zZsFMoAu4c
— L Laws (@L Laws) 1533234659.0

Trump has routinely accepted Putin's denials as proof that Russia did not interfere in the election. As recently as yesterday, the president referred to the investigation into Russian election interference as a "rigged witch hunt," going so far as to instruct Attorney General Jeff Sessions to shut down Special Counsel Robert Mueller's probe into election meddling and whether or not Trump obstructed justice.

Legal experts have suggested that this tweet may itself be an attempt to obstruct justice, and Mueller is reportedly rummaging through Trump's tweets to collect evidence of the president's intent to do so.

At the press briefing on Thursday, Coats reiterated the conclusions of American intelligence agencies that not only did Russia attempt to sway the 2016 election but that Russia is continuing its efforts to disrupt future elections, including the 2018 midterms and the 2020 presidential contest.

"The intelligence community continues to be concerned about the threats of upcoming U.S. elections - both the midterms and the presidential elections of 2020," Coats warned.

He continued: “In regards to Russian involvement in the midterm elections, we continue to see a pervasive messaging campaign by Russia to try to weaken and divide the United States.”

"These efforts are not exclusive to this election, or future elections, but certainly cover issues relevant to the elections," Coats added.

Once again, social media wasted no time blasting the administration's lack of a coherent plan to combat Russian attacks on our elections. And many think Russia has already won.