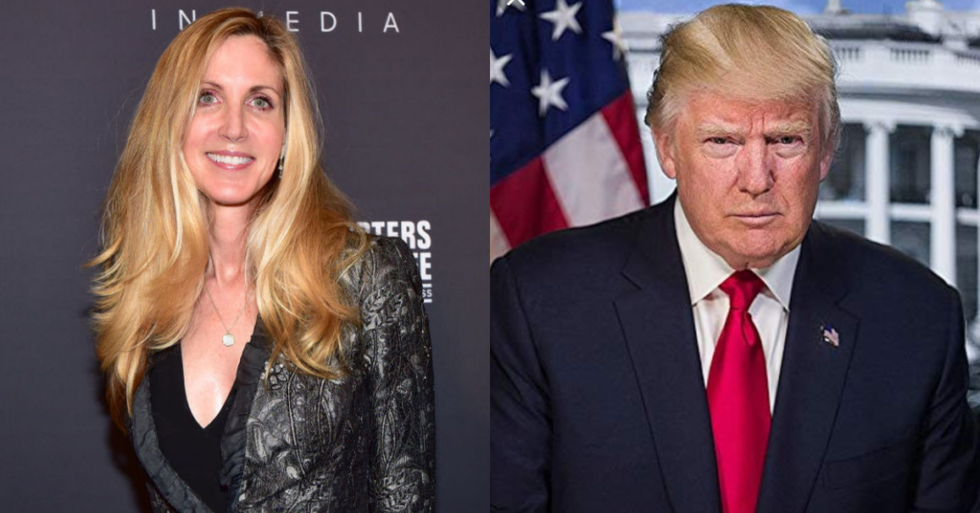 Often railing against immigrants from certain parts of the world—like her Fox News counterparts Laura Ingraham and Tomi Lahren—Coulter was particularly riled by Trump's recently announced plan to compromise with Democrats on Deferred Action for Childhood Arrivals (DACA) and reopen a pathway for DREAMers to gain citizenship. DREAMers—so named for the proposed Development, Relief, and Education for Alien Minors (DREAM) Act—were in the news this week as the Supreme Court heard arguments for and against Trump's plan to end DACA.

When Trump tweeted he planned to make a deal with Democrats for DACA, Coulter shared his post with her own message for the President.

People were pretty sure they knew why she was mad.

@AnnCoulter How could anyone have known that he can’t be trusted? Why, you’d have to have an almost average intell… https://t.co/FHHlbeEUml
— JRehling (@JRehling) 1573599175.0

@RMConservative @BlazeTV You mean like not promising to make a #DACADeal with Dems after describing the program’s recipients as criminals?
— Hart Celler (@Hart Celler) 1573683421.0

But even within Coulter's replies, the xenophobes found little shelter.

Some chose to ignore Coulter's xenophobia and simply agree with the statement that DREAMers could stay and Trump needed to go away.

@sofain @AnnCoulter a broken clock is right twice a day. I retweeted her recently with this picture just to make i… https://t.co/Wmod5UWeGP
— Ryan Alexandra (@Ryan Alexandra) 1573656770.0

Whether Coulter stays mad or whether Trump returns to her good graces remains to be seen. But most people are banking on the latter.

The book Dear America: Notes of an Undocumented Citizen is available here.

"My name is Jose Antonio Vargas. I was born in the Philippines. When I was twelve, my mother sent me to the United States to live with her parents. While applying for a driver's permit, I found out my papers were fake. More than two decades later, I am still here illegally, with no clear path to American citizenship. To some people, I am the “most famous illegal" in America. In my mind, I am only one of an estimated 11 million human beings whose uncertain fate is under threat in a country I call my home."