A Republican Lawmaker Railed Against Oklahoma Teachers for Protesting, Now One Is Running Against Him 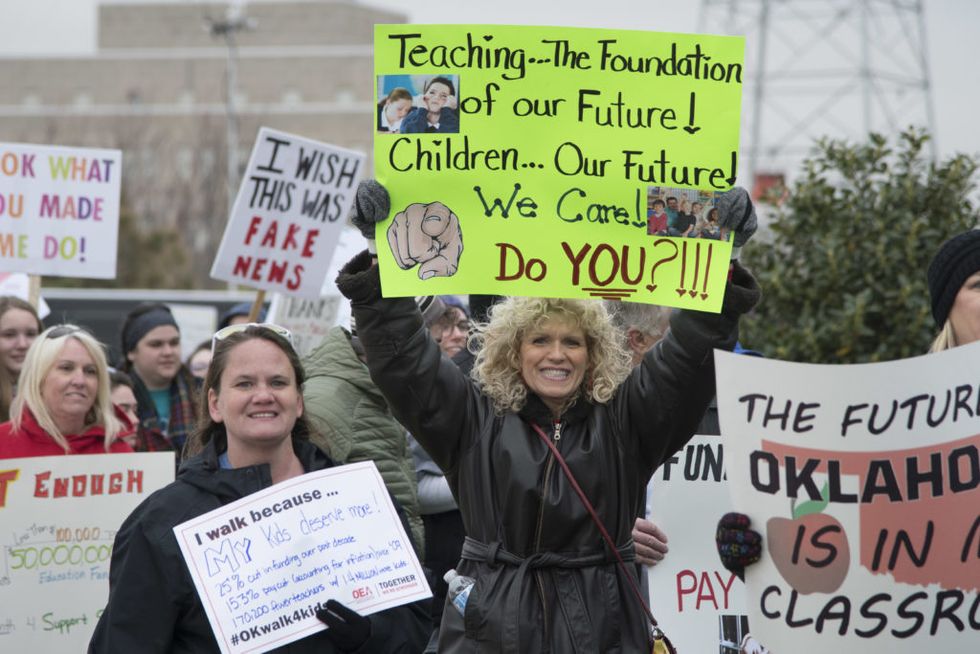 OKLAHOMA CITY, OK - APRIL 2: Oklahoma teachers rally at the state capitol on April 2, 2018 in Oklahoma City, Oklahoma. Thousands of teachers and supporters are scheduled to rally Monday at the state Capitol calling for higher wages and better school funding. Teachers are walking off the job after a $6,100 pay raise was rushed through the Legislature and signed into law by Gov. Mary Fallin. (Photo by J Pat Carter/Getty Images)

Oklahoma Representative Kevin McDugle (R-Broken Arrow) is now facing a Democratic challenger after he posted a video rant assailing teachers who are striking in his state.

Cyndi Ralston, who has been teaching for 30 years, said she was inspired to run for the 12th District's seat after McDugle posted his video. She made her decision, in part, because McDugle vowed to vote against education funding during the strike.

In his video, McDugle aired frustration with teachers.

Let me tell you something. I've voted for every teacher measure to fund them. And now, they come into this house, they want to act this way. I'm not voting for another stinking measure when they're acting the way they're acting. Our kids follow their example, and this is the example they set? I understand the frustrating, but this is not the way to go about it. You're losing the support of people who supported you all year long. All year long, we supported you, and now you're gonna come here and at like this after you got a raise? Go ahead, be pissed at me if you want to.

Wow! I’m having a hard time keeping up with everything this morning. I just want to say THANK YOU to everyone reach… https://t.co/ogscFcPR00
— Cyndi Ralston (@Cyndi Ralston) 1522848749.0

In response, Ralston posted on Facebook that McDugle's comments "disrespected and denigrated teachers and administrators" who were petitioning the Oklahoma State Legislature for more education funding.

Ralston decided to announce her candidacy ahead of schedule, thanks to McDugle's anti-teacher rant.

For years, my profession has been under siege by our legislature. Budget cut after budget cut have forced us to do ever more with ever less, and it cannot continue on this path. When my colleagues and I have visited our Republican representatives and senators, we have been brushed off, if not outright lied to. Republican members of the legislature have made it crystal clear that they do not believe they work for us, that our concerns do not matter. That disrespect was given a name and a face this morning when Representative McDugle posted his video. I cannot, I will not stand idly by any longer.

Severe budget cuts have left Oklahoma public schools struggling to keep their doors open. Some school systems have cut the school week down to four days, while others have had to sit through bitterly cold weather because there isn't enough money to run the heat.

Oklahoma's schools currently rank 49 out of 50 in teacher pay.

Teachers and administrators are asking for $200 million in education funding. Teachers are also demanding a $10,000 pay raise over three years, and $5,000 raises for other school staff.

Today marks the fourth day of the walkout. Most public schools have been closed in support of educators.

The Oklahoma Capitol is at capacity once again — troopers even limiting access to some parts of the building becaus… https://t.co/GpmEpza6nM
— Oklahoma Watch (@Oklahoma Watch) 1522859466.0

Support for Ralston is strong on social media. Democrats have been enjoying a wave of local and state special election victories since President Donald Trump took office. Notably, historically deep red districts have been turning blue as anti-Trump sentiment ripples throughout the electorate.

@KOCOJessica I love it and have my blessing but you’ve got to be aggressive in the face of assholism for its abunda… https://t.co/JnDIp0JXco
— Achilles Cobalt (@Achilles Cobalt) 1522909898.0