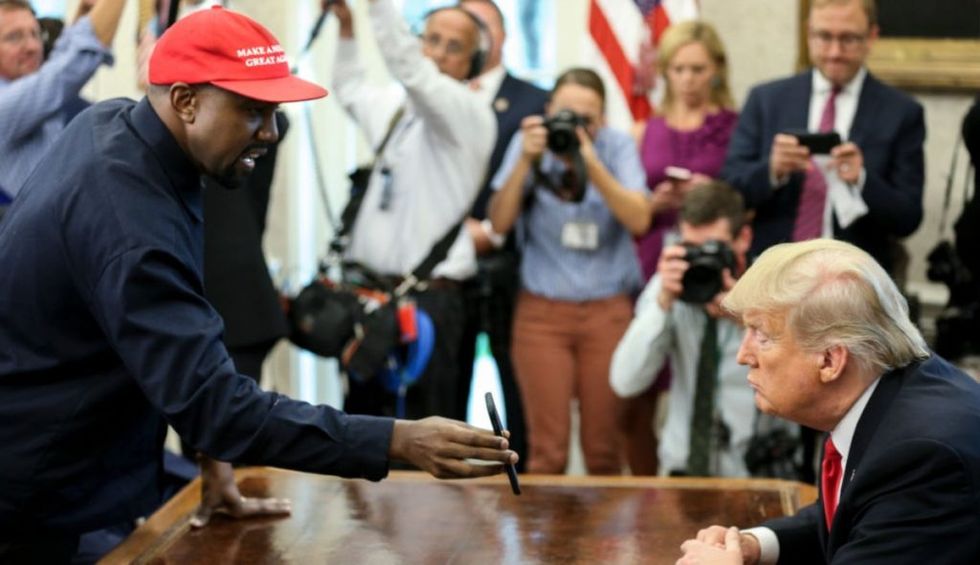 Rapper Kanye West shows a picture of a plane on a phone to U.S. President Donald Trump during a meeting in the Oval office of the White House on October 11, 2018 in Washington, DC. (Photo by Oliver Contreras - Pool/Getty Images)

Video of artist Kanye West's Oval Office meeting with President Donald Trump began to make the rounds on social media and on cable news programs Thursday afternoon. While many found the footage entertaining, not everyone is laughing.

CNN host, conservative political commentator and writer S.E. Cupp is one of those people.

While she agreed that some of the statements made by West were funny, she raised questions about mental illness and exploitation. In a discussion with fellow CNN personnel, Cupp stated:

"All jokes aside, I thought that was really... sad. I think you had there a man who's clearly not okay, and a President who's willing to exploit that."

"And worse, to exploit that under the auspices of race relations and Black communities, joblessness, mental health...all the things that ended up in this bucket of issues that were sort of addressed in this free for all. I don't know that any of them were very well served by this circus."

Cupp is not alone in her criticisms or concerns.

@thehill Take your medication Kayne West. Your speech is very rapid, your ramblings are incoherent, your profanity… https://t.co/GTxBRvFQgo
— Judica (@Judica) 1539287752.0

I wish Kanye west wouldn’t encourage bipolar disorder unmedicated as normal. Do you all know what if feels like not… https://t.co/HBWUf22nVK
— Kelsey (@Kelsey) 1538932876.0

I am someone who has been very open about being bipolar, and I recognize it in other people. The rant that Kanye We… https://t.co/ukMDYpDUY3
— Kevin Salisbury (@Kevin Salisbury) 1539279292.0

Although not everyone cut West any slack when they acknowledged he might be having a manic episode.

Some still found his comments or behavior inappropriate.

Others echoed their disdain for West being placed in front of a cadre of media in the Oval Office by the Trump administration during the artist's mental health crisis.

@brianstelter @AprilDRyan @secupp Everything Trump does is a circus, so this should be no surprise to anyone. he's… https://t.co/X39geG9FzG
— Matt Flanagan (@Matt Flanagan) 1539286186.0

Months after revealing he suffered from bipolar disorder, West claimed Thursday he was merely sleep deprived. However one well documented effect of mania is denial of illness.

Mental health professionals characterize it as the patient feeling they are 10 feet tall and Superman, making West's comments even more troubling. Hopefully, if—as many with firsthand experience with mental illness suggest—West is experiencing a manic episode, he gets the help he needs.