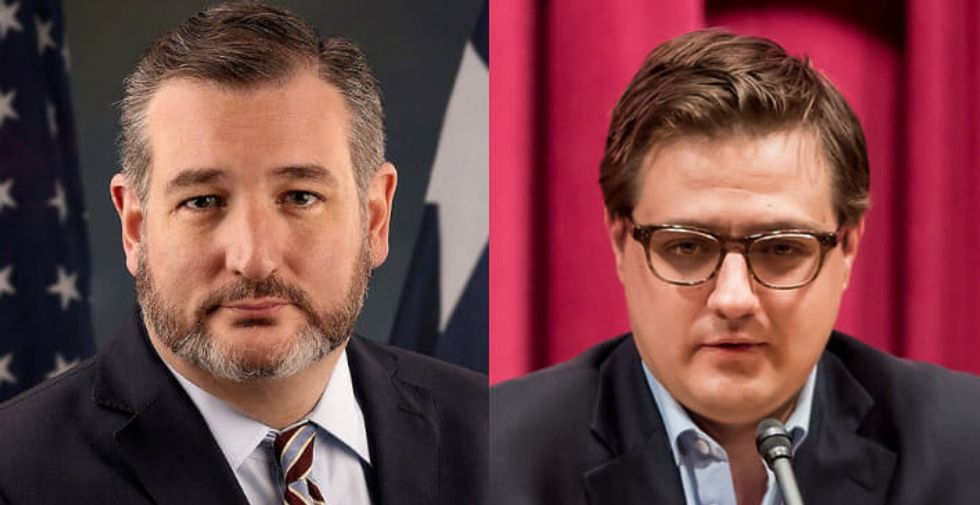 During the 2018 midterm elections, Republican Senator Rafael "Ted" Cruz took a beating about his image resulting in a narrow victory—considering he represents deep red Texas—at the polls. Critics called him a wimp and brought up his acceptance of insults from President Donald Trump about his wife and father, his Canadian birthplace and his lack of coolness.

Since then, Cruz appears to have launched a gritty reboot of himself—adding facial hair and trying for a "cool, tough guy" persona the Texas GOP tried and failed to sell during the election. Included in that effort is tough talk on Twitter and in interviews that—unfortunately for Cruz—gets mostly mocked.

After author and MSNBC host Chris Hayes called out Cruz's leap onto the "White, Christian conservatives are the most persecuted people in the United States" bandwagon...

...the Texas Republican posted a bizarre threat in response.

Cruz serves on the Senate Armed Services committee which includes the oversight of President Trump's new—and equally mocked—Space Force. His space pirates jab at Hayes came just a day after everyone got a laugh at his expense over comments Cruz made in committee about the Space Force.

The response to Cruz's odd choice of response to Hayes' tweet leaned heavily against the Texas Senator.

People thought it might have been posted by a parody account instead of the real Senator Rafael Cruz.

Devin Nunes' cow brought up another embarrassing Twitter moment from Cruz's past.

In case you forgot...

Or is it just a deficiency inherent in the GOP?

And some went full circle back to Hayes' original observation about sad tweets.

Sorry Senator Cruz. Everyone is trying to #BeBest.

But there were fish in the barrel and you handed out guns.