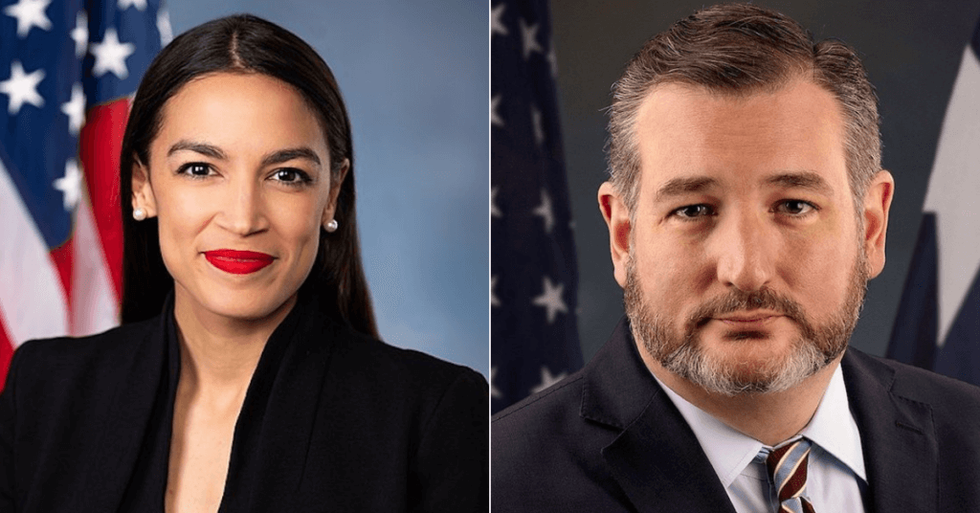 After an attempt at being clever on Twitter, the new hip Republican Senator Rafael "Ted" Cruz—complete with beard and cravats—drew mainly mockery. The Senator tried to disparage a tweet about minimum wage.

On Monday, freshman Representative Alexandria Ocasio-Cortez (D-NY) tweeted about a living wage for workers. She posted:

"Croissants at LaGuardia are going for SEVEN DOLLARS A PIECE. Yet some people think getting a whole hour of personal, dedicated human labor for $15 is too expensive?"

In response, the GOP Senator from Texas tweeted:

"Oh the humanity! Here’s the answer: government-mandated FREE CROISSANTS FOR ALL. And we’ll just force the bakers to give all of their time for free. #SocialistLogic #AprilFools"

Now many people are saying Cruz is a bit like this:

"GOP taking every tweet so earnestly, making my point for me. It’s not an argument against the price of a croissant - it’s about the value of human worth."

Ocasio-Cortez represents a state that voluntarily raised minimum wage above the federal guidance of $7.25 an hour. In New York, it is $11.10.

In deep red Texas where Cruz lives, the federal minimum is still the state minimum. Texas is one of 21 states that chose to keep the lower minimum wage.

Department of Labor statistics show a person working full time in no state in the United States can afford food and housing when earning the federal minimum wage.

One of the issues Democrats vowed to tackle in the 2018 midterms was a living wage. But not everyone is on board with that idea.

Many people were there to respond to Senator Cruz however.

People pointed out he missed the mark.

@tedcruz Only a guy who would let the president personally insult his wife AND father in public and then still fall… https://t.co/dyYaD0QCYu
— Michael Gach (@Michael Gach) 1554146196.0

@tedcruz Ted, Trump’s goon, will do the dirty work, charged criminally and go to jail all while Trump plays golf. A… https://t.co/fwQIEIfuRu
— pfaltisek (@pfaltisek) 1554141856.0

However Cruz was not the only one who missed the point. Others had to have an explanation as well.

The federal minimum wage was first proposed in 1912 in Massachusetts. In 1933 it became a part of the National Industrial Recovery Act (NIRA).

According to the Bureau of Labor Statistics, almost four million hourly workers earned the federal minimum wage of $7.25 per hour or less, due to an exemption. More than 50 percent of minimum wage employees work in the leisure and hospitality industry. The next largest groups work in retail, education and health services.

Since 1938 the minimum wage rose 22 times, from 25 cents to $7.25. Economists state it would need to jump to $10.55 to account for inflation and cost of living changes and become a "fair living wage."