Right Wing Conference Party's Cocktail Menu Tried to 'Own the Libs' With Its Drink Names, and It Backfired Spectacularly 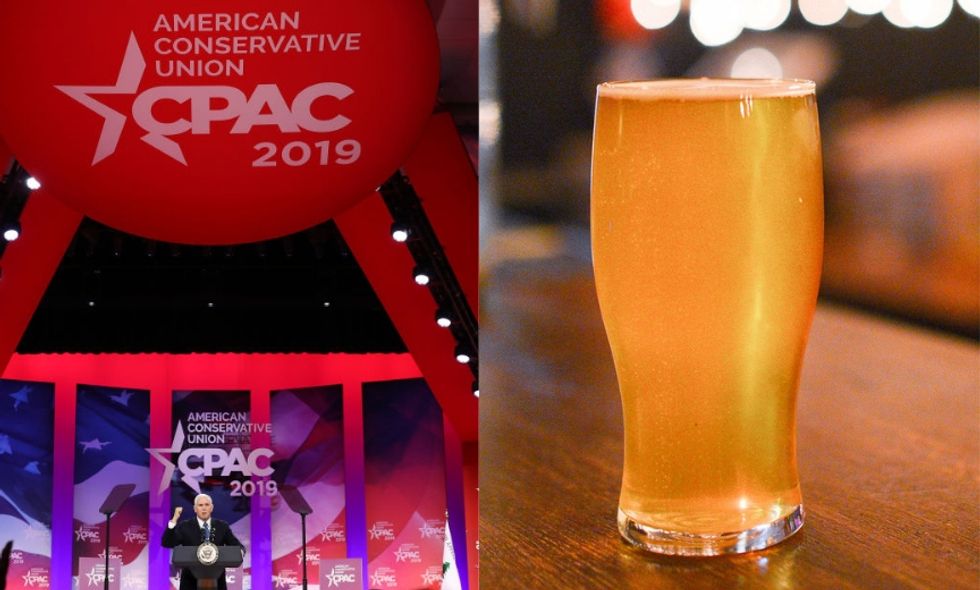 The American Conservative Union's Conservative Political Action Conference [CPAC] is a convention of Conservative activists and politicians known for being one of the biggest events of the year for the far-Right.

This year's CPAC is on its third day and its speakers have already generated some wildly false claims, from former White House aide Sebastian Gorka threatening that Democrats are hell-bent on banning hamburgers to Donald Trump Jr. fanning fears of nonexistent "Post Term Abortions."

Democrats are enemy number one at CPAC, and the cocktail menu at one of its parties tried to reflect that. Instead, it only opened itself up for ridicule.

Owning the libs by reminding everyone of the president’s signature campaign promise he famously failed to fulfill https://t.co/HYLbLfGUch
— Jess Dweck (@Jess Dweck) 1551418612.0

Sarah Sanders - Bourbon on the Rocks

Mexico will pay for it - Tequila Sunrise

The item that got the most attention was the "Mexico will pay for it." You'll recall then-candidate Donald Trump's oft-repeated campaign promise that Mexico would pay for a wall at the southern border. In his attempts to secure American taxpayer funding for the wall, Trump initiated the longest government shutdown in United States history and just recently declared a national emergency at the border—a move whose constitutionality is in question.

Apparently the person behind this menu didn't know or didn't care that Trump gave up on Mexico directly paying for the wall years ago.

People were sure to remind attendees of the conference just how inept Trump has proven to be with his wall promise.

@TheDweck After you order it, you are told you have to pay for it and it’s just some orange juice dribbled in a few… https://t.co/1SRaDwgxMU
— NickatNite (@NickatNite) 1551438293.0

That wasn't all they noticed.

Many pointed out that a lot of the "cocktails" aren't actually cocktails, and that if you walked up to a bartender and asked for "wine" or "a beer," they'd probably ask you to be more specific.

However, we have a feeling the "mixologists" behind these are giving themselves a collective pat on the back.

Like Brett Kavanaugh's beer, the jokes were just flat.