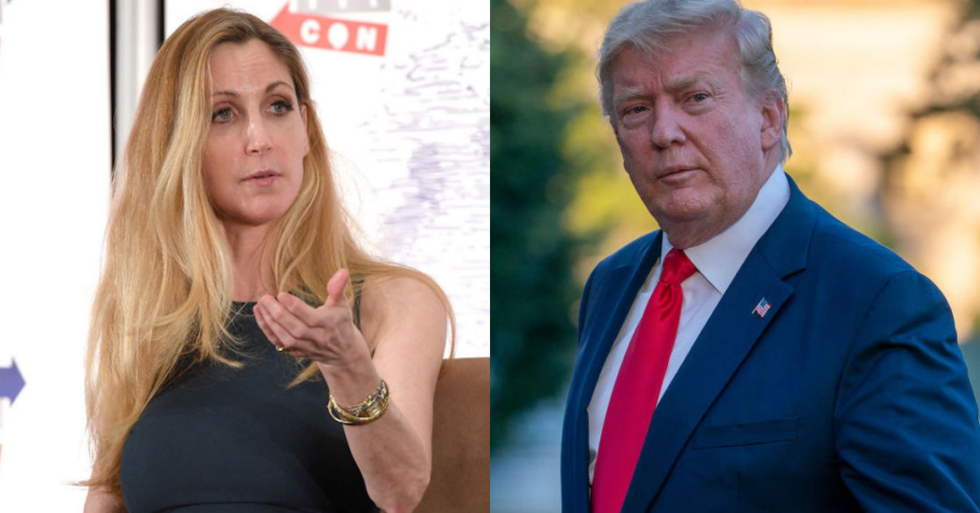 While much of the United States expressed dismay over presidential racist Twitter posts and MAGA rallies. some conservatives attacked President Donald Trump for not going far enough. Ann Coulter, former right wing media juggernaut wrote the book In Trump We Trust, but changed from praise to criticism after the President failed to keep his campaign promises.

Coulter posted frequent Twitter posts asking why there was no wall at the southern border. In response to her tweets, Trump called Coulter a "Wacky Nut Job."

The Drudge Report titled their coverage:

So what names did Trump call Drudge?

When we rip down and totally replace a badly broken and dilapidated Barrier on the Southern Border, something which… https://t.co/BRquugcPCQ
— Donald J. Trump (@Donald J. Trump) 1563837413.0

Instead of calling Drudge something insulting, the President simply made his case against the report.

And Coulter called him out.

Some Coulter fans had her back.

@AnnCoulter @realDonaldTrump @DRUDGE They will eventually have to admit Ann was right all along. They won't of cou… https://t.co/bv9nlixhTk
— Lucas Olson (@Lucas Olson) 1563824622.0

@AnnCoulter @realDonaldTrump @DRUDGE There's only 1 Coulter. Fearless and good looking into the bargain. Can you no… https://t.co/LaV4XpJiFx
— Sean Moore (@Sean Moore) 1563824316.0

Although some thought Trump's attacks on Coulter said more about his attitude regarding women in general than anything about Matt Drudge.

However, plenty of supporters of the President were there to correct Coulter about Trump's successful wall building. Although most ran up against a fact check of their own.

People who were just not Coulter fans chimed in too.

While people like Coulter wait on their wall, they can play The Trump Presidential Wall game, available here.