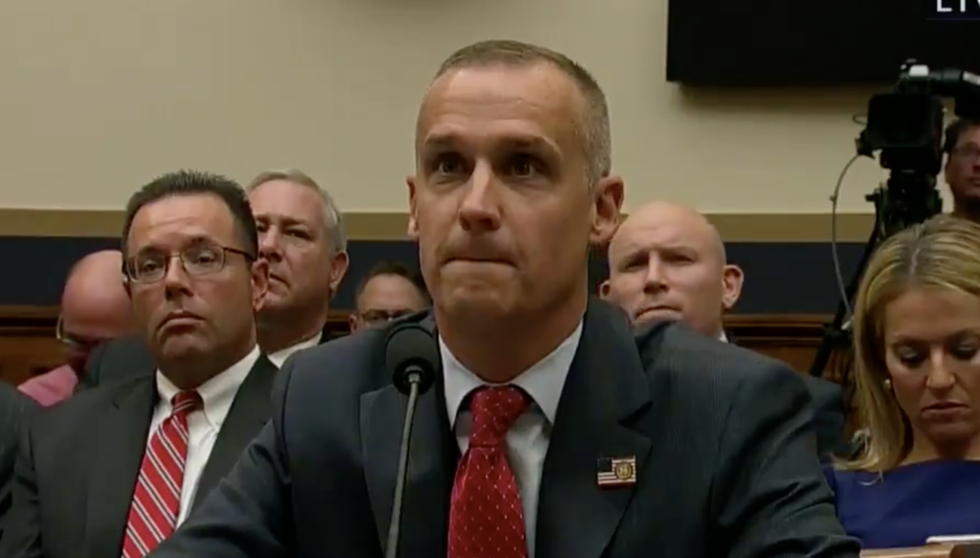 Despite parting ways with the campaign in 2016, Lewandowski continued to advise Trump behind the scenes as a private citizen. When former White House Counsel Don McGahn refused to carry out Trump's request to demand former Attorney General Jeff Sessions un-recuse himself from the Russia investigation, Trump turned to Lewandowski.

After hours of constantly telling lawmakers that he wouldn't detail any private conversations he'd had with the President, it looked like the first "impeachment hearing" held by Congress would amount to little.

Lewandowski, dripping with disdain, all but admits he lied during media interviews, prompting the audience to gasp… https://t.co/gdMLX0hnrq
— Aaron Rupar (@Aaron Rupar) 1568758641.0

After playing an MSNBC clip in which Lewandowski claimed the President had never asked him to get in touch with Jeff Sessions and demand he un-recuse himself, Berke asked, "That wasn't true was it, sir?"

"I have no obligation to be honest with the media, cause they're just as dishonest as anybody else."

People observing the proceedings audibly gasped. Berke continued to ask Lewandowski if he'd been truthful in the MSNBC interview, then admonished Lewandowski for having to consult his counsel to properly answer. Lewandowski responded by assuring Berke that he does tell the truth...when under oath.

Hours before, during the hearing, Lewandowski announced his run for Senate via tweet.

People weren't surprised that a Trump loyalist lied, but that they were so bad at covering it up when testifying.

"I have no obligation to be honest with the media." Every TV network should remember this moment the next time the… https://t.co/OKSzEOwNWU
— Brian Tyler Cohen (@Brian Tyler Cohen) 1568766661.0

@atrupar Lewandowski, who is running for public office, admits over and over that he only intends to be truthful wh… https://t.co/eyJngGqUpu
— Beki Knott (@Beki Knott) 1568763284.0

Despite Lewandowski openly admitting he felt no obligation to be truthful when advocating for Trump on national television, CNN had him on the air by Wednesday morning.

Genuinely can't overstate how wack it is that they brought Lewandowski onto CNN the day after he TOLD A CONGRESSION… https://t.co/X5Zy9JbP9Z
— Andrew Egger (@Andrew Egger) 1568819281.0