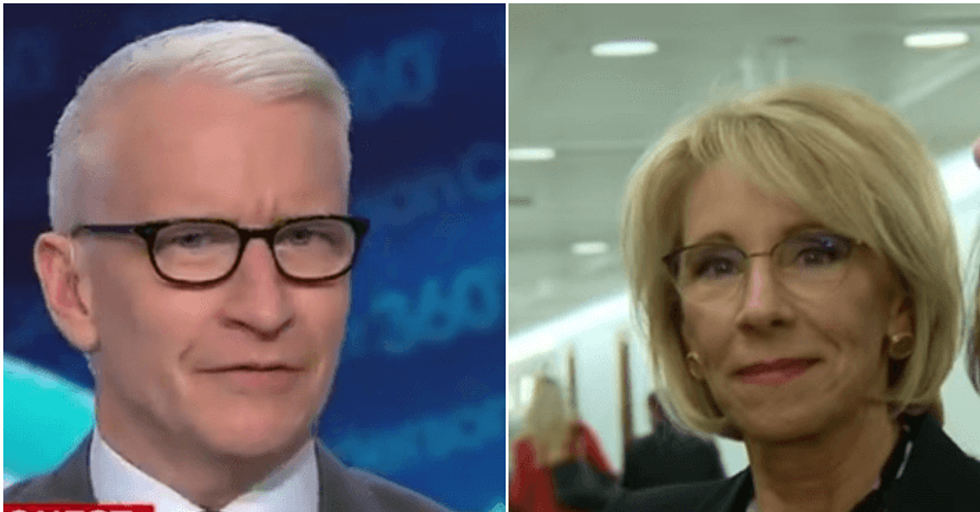 But in a bizarre series of events,  Trump and DeVos appeared to be pointing fingers at each other over whose idea the cuts were.

"I am pleased and grateful the President and I see eye-to-eye on this issue and that he has decided to fund our Special Olympics grant. This is funding I have fought for behind the scenes over the last several years."

That response varied greatly from what DeVos said ever since her budget release during both congressional budget hearings and in interviews before the President's announcement.

But when CNN reporter Ryan Nobles asked DeVos to clarify, it just got awkward.

"Oh my god, that was so painful and awkward. I love the camera, after focusing on the back of her head — the camera person moves around.  And then she’s looking at, I assume someone who works for her, for some sort of saving."

"But the other person was just like ‘Uh I’m not saying another word either'. That’s an epic non-response."

Cooper was far from alone in that assessment.

Others found the "not me" battle to absolve themselves of the Special Olympics funding cuts decision done by both Trump and DeVos telling. As were DeVos' responses highlighted in the segment.

@CNN @andersoncooper Anyone else think @BetsyDeVosED can start packing up her office in the White House? #byebyebetsy
— Beth (@Beth) 1553826741.0

@CNN @andersoncooper NO ONE in this administration should EVER get another position on office/government EVER EVER EVER AGAIN !!!
— BRAD ARMSTRONG (@BRAD ARMSTRONG) 1553825275.0

@CNN @andersoncooper #BetsyDeVos just wants another yacht since to her and her Christian based #RepublicanParty is… https://t.co/rY77GnLf5j
— Carmen Hernandez (@Carmen Hernandez) 1553856269.0

People were also less than grateful for the Trump administration's reversal of their own budget proposal.

While one person floated a theory about the original decision.