Kellyanne Conway Just Channelled Hillary Clinton in Her Defense of Brett Kavanaugh, and People Aren't Having It 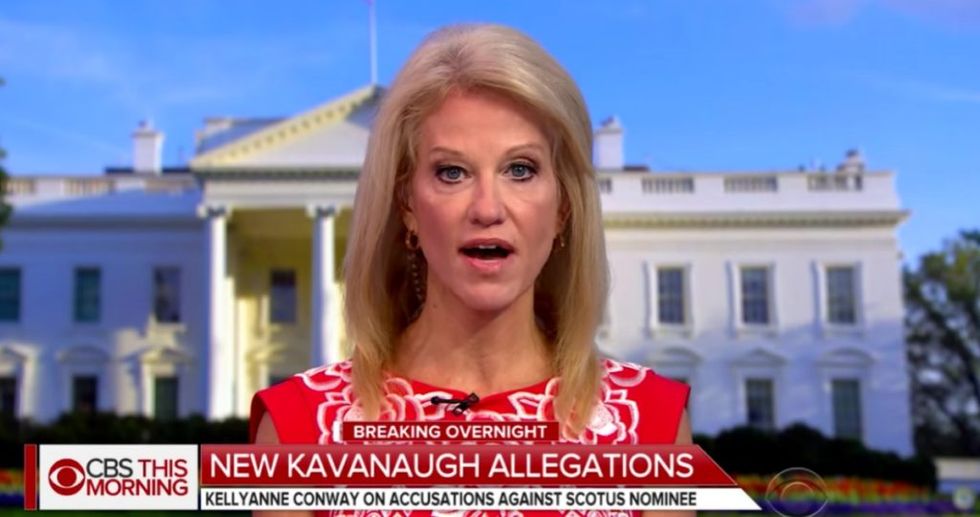 In an appearance on CBS The Morning Monday, Kellyanne Conway, White House Counselor to the President, stated the mounting sexual assault allegations against President Donald Trump's Supreme Court nominee, Brett Kavanaugh, are "starting to feel like a vast left-wing conspiracy."

People could not help but be reminded of another time they heard those words. Back in 1998, First Lady Hillary Clinton said on the Today show—near the end of the over 4 year long Independent Counsel Ken Starr investigation—Republicans were engaged in a “vast right-wing conspiracy” against her husband, President Bill Clinton.

After stating spent Starr four years examining every document, phone call made and check written by them looking for anything to implicate her husband, the then FLOTUS stated:

"The great story here for anyone willing to find it and write about it and explain it, is this vast right-wing conspiracy that has been conspiring against my husband since the day he announced for President."

You can watch Clinton's remarks here.

"This is starting to feel like a vast left-wing conspiracy," says @Kellyannepolls on new accusations against Brett… https://t.co/9cj74qRPCS
— CBS This Morning (@CBS This Morning) 1537787599.0

According to her 2003 book, at the time Clinton made the statement, she believed her husband when he told her he had never had a sexual relationship with a White House intern. The irony of Conway choosing a statement Clinton made that then led to a proper admission of sexual misconduct against President Bill Clinton also did not escape people's notice.

Others took exception to Conway trying to pass things off as simply a conspiracy while also claiming she and the President respect the women and want them to be heard.

@CBSThisMorning @TBlackwe85 @KellyannePolls Every time someone gets in hot water in this administration it's a conspiracy
— Michelle Sabata (@Michelle Sabata) 1537790323.0

@CBSThisMorning @CBSEveningNews @KellyannePolls Yeah, the left planted women 35 years ago and were waiting for this day.
— RJ (@RJ) 1537791100.0

@CBSThisMorning @KellyannePolls No @KellannePolls it's starting to look like your boy is a sexual predator. Hard to… https://t.co/G6IIadvEPA
— Kathleen O'Brien (@Kathleen O'Brien) 1537787837.0

Some had issues with Conway's credibility...

...after her infamous "alternative facts" statement to explain away a lie told and repeated by the Trump administration about the crowd size at Trump's inauguration.

@CBSThisMorning @KellyannePolls Giving the chief purveyor of alternative facts airtime and behaving as if it is cre… https://t.co/aaDZFZMJA5
— KathrynM (@KathrynM) 1537790592.0

@CBSThisMorning @CBSNews @KellyannePolls So disappointed In CBS for lowering their journalism standards and having… https://t.co/ogGLRXnC2Z
— Samantha Richard (@Samantha Richard) 1537788490.0

While others refuted Conway's claim with information regarding the latest Kavanaugh accuser.

@CBSThisMorning @KellyannePolls “The classmates at Yale were talking to each other about it, they were emailing abo… https://t.co/mQ4hVp1pGZ
— KSD (@KSD) 1537787666.0