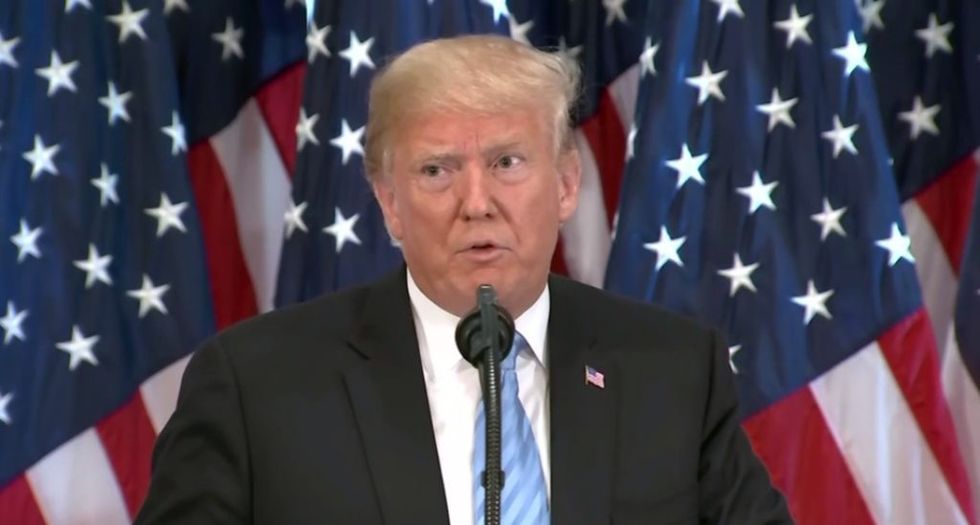 On Wednesday, President Donald Trump gave a press conference in New York City to cap off his visit to the city. He came back to his hometown to address the United Nations on Monday—which lead to an awkward moment that people continue to talk about.

For most pundits and members of the public, the President's 81 minute wide-ranging press conference resulted in another swing and a miss. The general consensus in the press and on social media characterized Trump as rambling and even incoherent at times.

But not everyone saw the press conference in that light.

Conservatives on social media heaped praise on Trump. Unsurprisingly, they had a similar reaction to his widely mocked appearance before the United Nations.

Charlie Kirk—founder and Executive Director of conservative student organization Turning Point USA—took to Twitter after the press conference to state:

"This press conference is exactly why we fought so hard to elect [Donald Trump]."

"He should do this many times a week. He is his own best advocate."

"I have to say - I think the president has handled this press conference pretty well. He’s in control, not jumpy. Clear in his messages on a range of topics. Made a couple of measured and careful statements on sensitive topics."

And former member of the Trump administration, Anthony Scaramucci, tweeted:

"He is doing a great job at this press conference. Will anyone write that? Will anyone report that on tv?"

It should be noted all three men tagged the President in their tweets praising him. That may be the audience they hoped to reach, as their reception on Twitter met a less than favorable response.

The Twittersphere let each one know what they thought of their assessments of Trump's press conference performance.

Charlie Kirk's tweet drew ridicule almost exclusively, including some accusations of pandering to the President.

@charliekirk11 @pattonoswalt @realDonaldTrump Wow. For once I’m stunned into silence. You and I are absolutely occu… https://t.co/dfKMQbdWhF
— Sam Witt (@Sam Witt) 1538004785.0

While Scott Jennings post received its own rebuttals which included much speculation about Trump's mental state.

@ScottJenningsKY @realDonaldTrump By the way, everyone, this Trump press conference is how people with serious mental illness talk.
— Sir Humphrey (@Sir Humphrey) 1537998884.0

@StuffedFantod @ScottJenningsKY @realDonaldTrump It's some kind of disturbance in any case.
— Sir Humphrey (@Sir Humphrey) 1537999263.0

However Scaramucci received a bit of mocking comments directed at himself.

You can read a full transcript of President Trump's September 26, 2018, press conference here.