Condemnation From All Sides Over Trump's Trans Service Ban

The statements from those with military service counter Trump's claim that allowing transgender people to serve would create “disruption” in the military. 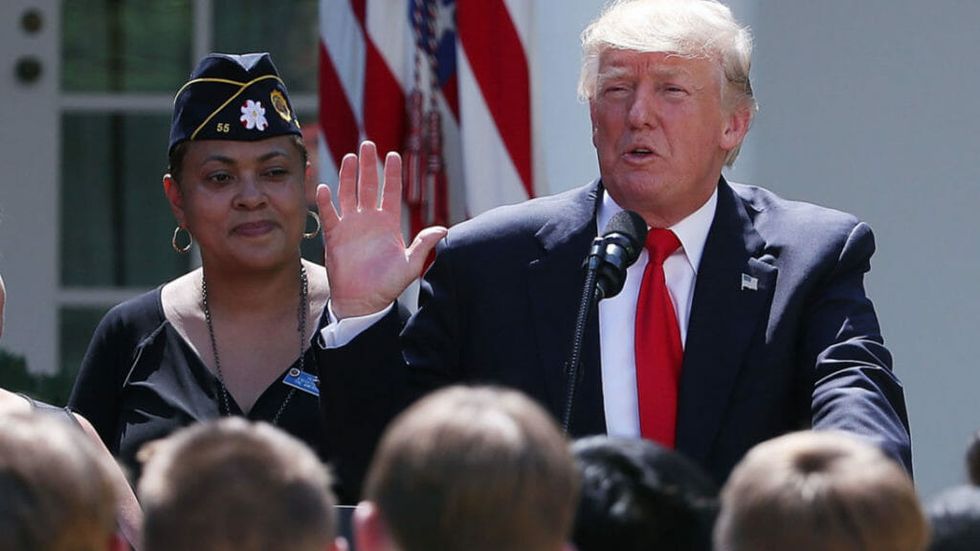 President Donald Trump's sudden decision to ban transgender individuals from serving in the military in any capacity sparked a flurry of condemnation from lawmakers from both sides of the aisle. Even as Trump's announcement attempted to appeal to his hardline GOP base, the backlash from Republicans, including those with military experience, signals that there is bipartisan support for transgender people serving in the military.

The statements from those with military service counter the president's claim that allowing transgender people to serve would create a “disruption” in the armed forces.

Senator John McCain (R-AZ), a Vietnam War veteran, argued against Trump’s ban, saying that military should allow anyone who is qualified to serve to do so:

Any American who meets current medical and readiness standards should be allowed to continue serving. There is no reason to force service members who are able to fight, train, and deploy to leave the military — regardless of their gender identity. We should all be guided by the principle that any American who wants to serve our country and is able to meet the standards should have the opportunity to do so — and should be treated as the patriots they are.

Senator Joni Ernst (R-IA), who is an Iraq War veteran, also expressed her opposition. “Americans who are qualified and can meet the standards to serve in the military should be afforded that opportunity,” she said in a statement.

Senator Dan Sullivan (R-AK), who served in the United States Marine Corps, did not mince words when speaking to reporters. “I’m all about training standards. High, high standards for whoever joins the military,” he said. “But my initial reaction is, if you can meet those standards, we shouldn’t care who you are. So, meet the standards, and you should be able to join the military.”

As expected, Democrats condemned the president's announcement, slamming it as both discriminatory and unpatriotic.

Former Vice President Joseph Biden was among the first to issue a statement:

Also – did the President really consult military leaders on this? Four Star General told SASC a week ago they wanted time to review this
— Tim Kaine (@Tim Kaine) 1501079260.0

.@realDonaldTrump can pretend this is a military decision, but it isn't. Banning troops on gender identity is shameful & makes us less safe.
— Elizabeth Warren (@Elizabeth Warren) 1501081217.0

Senator Tammy Duckworth (D-IL), herself a veteran of the Iraq War, issued a passionate message of support to transgender military service members.

“When my Black Hawk helicopter was shot down in Iraq, I didn’t care if the American troops risking their lives to help save me were gay, straight, transgender or anything else," she said. "All that mattered was they didn’t leave me behind. If you are willing to risk your life for our country and you can do the job, you should be able to serve — no matter your gender identity, sexual orientation or race. Anything else is discriminatory and counterproductive to our national security.”

Reaction from conservative groups was mixed.

This smacks of politics, pure and simple. The United States military already includes transgender individuals who protect our freedom day in and day out. Excommunicating transgender soldiers only weakens our readiness; it doesn’t strengthen it. The president’s statement this morning does a disservice to transgender military personnel and reintroduces the same hurtful stereotypes conjured when openly gay men and women were barred from service during the military’s ‘Don’t Ask, Don’t Tell’ era. As an organization that led the charge against that hateful policy, Log Cabin Republicans remains equally committed to standing up for transgender military personnel who put their lives on the line to keep us free.

Tony Perkins, the socially conservative President of the Family Research Council––who last year proposed an amendment supporting “conversion therapy” for children who identify as LGBT as part of the GOP platform––applauded Trump's decision:

I applaud President Trump for keeping his promise to return to military priorities — and not continue the social experimentation of the Obama era that has crippled our nation’s military. The military can now focus its efforts on preparing to fight and win wars rather than being used to advance the Obama social agenda.

President Trump recognizes what the nation’s military leadership and the American people realize, this Obama policy makes no sense.

today is further reason we should dismantle the bloated and dangerous military/intel/police state to fund #healthcare for all 🌈😎💕 #WeGotThis
— Chelsea E. Manning (@Chelsea E. Manning) 1501081684.0

Human Rights Campaign President Chad Griffin issued a blistering statement of his own:

Today Donald Trump has proven himself as unpatriotic as he is unfit to serve as commander in chief. He has put a target on the backs of the more than 15,000 transgender troops proudly serving in our military. This heinous and disgusting action endangers the lives of American service members, undermines military readiness and makes our country less safe. It is also the latest effort by Trump and Mike Pence to undo our progress and drag LGBTQ people back into the closet by using our lives as political pawns.

From Mara Kiesling, the Executive Director of the National Center from Transgender Equality:

This is worse than ‘don’t ask, don’t tell.’ This is ‘don’t serve, don’t serve.’ This is an appalling attack on our service members; it is about bigotry rather than military readiness, reason or science. It is indefensible and cannot stand. The president wants to discard thousands of trained and skilled troops who are already serving honorably and done nothing but be honest about who they are. To turn away qualified recruits simply because of who they are is a shameful way to show our country’s gratitude to the people who serve our country.

WHY DID TRUMP DO IT?

A White House official insisted politics “was never an impetus” for Trump’s decision but said that “it will be fun to watch some of them [Democrats] have to defend this." Another official said the move “forces Democrats in Rust Belt states like Ohio, Michigan, and Wisconsin, to take complete ownership of this issue," which could hurt their political prospects.

Reports indicate that Trump's decision to bar transgender individuals from military service came as a response to an internal House Republican fight over sex reassignment surgery which threatened funding for his border wall. White House sources told reporters that Trump's sudden decision "was, in part, a last-ditch attempt to save a House proposal full of his campaign promises that was on the verge of defeat."