Republican Senator Just Issued a Threat to Donald Trump Over His Response to the Murder of Jamal Khashoggi, and People Are Calling Her Out 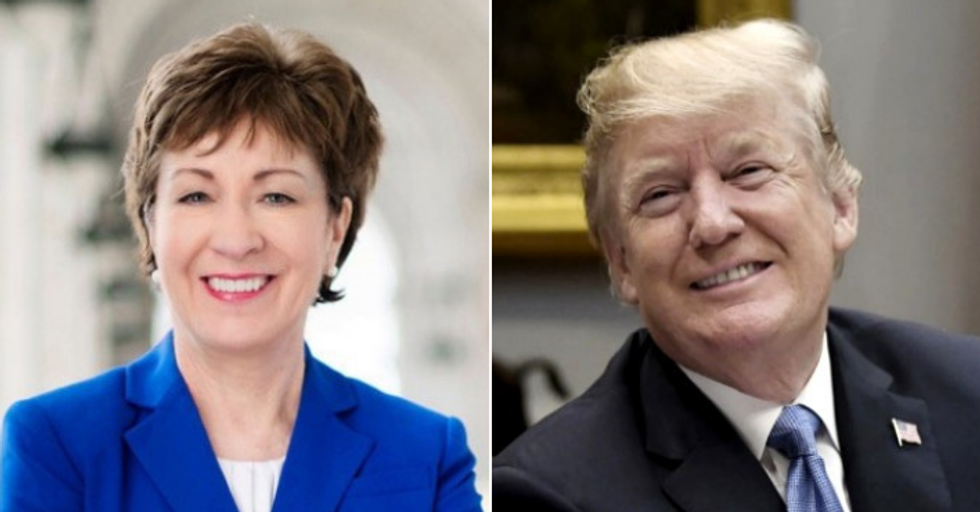 Republican Senator Susan Collins of Maine is widely regarded as a moderate voice in the Senate, willing to reach across the aisle for the best interests of her home state and the country. But that reputation has taken a hit—perhaps irreparably—since President Donald Trump took office.

Now Collins is seen as all bark, no bite—all talk, no action.

While Collins still talks a "moderate" game, her actions on key legislation like the GOP/Trump tax breaks and on the confirmation of Brett Kavanaugh to the Supreme Court followed party lines.

Now she is speaking up about the latest Trump outrage -- Collins took to Twitter Sunday to warn of possible action by Congress if Trump failed to acknowledge and act on information from the Central Intelligence Agency (CIA) regarding the murder of Saudi journalist and dissident Jamal Khashoggi, a United States resident.

"It is a grave mistake for the President to ignore the CIA's widely reported assessment on the Khashoggi murder. If the President does not reconsider what actions our government should take toward the Saudi Government & MBS, Congress must act instead."

It is a grave mistake for the President to ignore the CIA’s widely reported assessment on the Khashoggi murder. If… https://t.co/b7l9GpU9it
— Sen. Susan Collins (@Sen. Susan Collins) 1543185756.0

"MbS" is a reference to Saudi Arabian Crown Prince Mohammad bin Salman who, the CIA says, ordered the assassination of Khashoggi.

But people were not buying Collins' threat to take action if the President fails to respond appropriately to the journalist's murder at a Saudi consulate in Turkey.

The response on Twitter to Collins' assertion that "Congress must act" drew widespread criticism over Collins's failure to act when needed in the past, and skepticism over her following through on any promise to challenge this administration.

@SenatorCollins Respectfully Senator Collins, why are you weighing in on anything, especially “congressional action… https://t.co/neTV5UmMxj
— ProfessorBiz (@ProfessorBiz) 1543213631.0

@MrSoNso21 @SenatorCollins Agree!! I can no longer complement anything you say! I was totally let down by your “yes”vote drunk man. Retire.
— Victoria Burkert (@Victoria Burkert) 1543229104.0

@SenatorCollins Why are you bothering to go through the motions stating these things, you spineless, feckless, simp… https://t.co/PZdTn8HllC
— Christopher Miller (@Christopher Miller) 1543213905.0

@SenatorCollins You had your chance to stand up for what was right. You failed, and lost all your credibility with it.
— Rick Meneely (@Rick Meneely) 1543214025.0

@SenatorCollins If only you knew someone in Congress, maybe even a Senator, who would both SAY something and then DO something about this.
— David Clarke (@David Clarke) 1543236213.0

@SenatorCollins You have to give credit to Sen Susan Collins for being consistent. She always clutches her pearls &… https://t.co/bHWUtxQaBB
— The Breeze (@The Breeze) 1543225667.0

When criticized for her past votes following Republican party lines—putting the GOP before country and constituency—Collins claimed misogyny was behind her critics.

But a majority of her detractors are women angered by her inaction during the Kavanaugh confirmation process.

@SenatorCollins You have lost your right to represent yourself as separate from this president - we don't believe y… https://t.co/cP4kruhtoG
— Anacha (@Anacha) 1543213696.0

@SenatorCollins No kidding Captain Obvious. Any more pearls of wisdom that you will whine about and do nothing on?… https://t.co/Wbir0J23lD
— Betsy Shiller (@Betsy Shiller) 1543219906.0

Collins was not the only Republican Senator to threaten congressional action if Trump failed to act on the CIA report on Khashoggi's murder. South Carolina Senator Lindsey Graham also spoke out, but received much the same response as Collins.

People will believe it only when they see it.