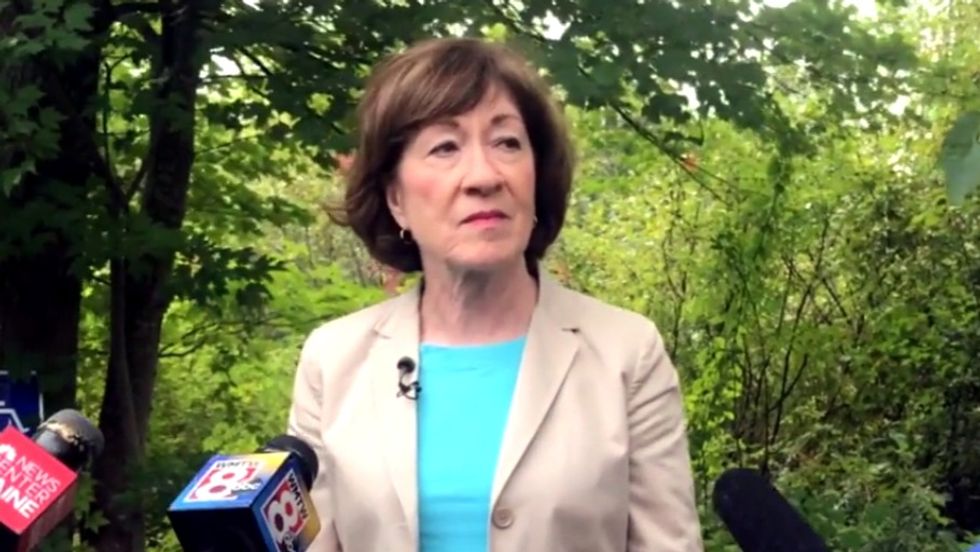 Maine Republican Senator Susan Collins—at an event in Portland, Maine—spoke to reporters from her home state about a Twitter post by President Donald Trump.

In his Friday morning post from Las Vegas, Trump attacked the validity of Dr. Christine Blasey Ford's allegations of sexual assault by his Supreme Court nominee Brett Kavanaugh while also taking a swipe at Dr. Ford's parents. The President posted:

"I have no doubt that, if the attack on Dr. Ford was as bad as she says, charges would have been immediately filed with local Law Enforcement Authorities by either her or her loving parents. I ask that she bring those filings forward so that we can learn date, time, and place!"

Ford—now a college professor—said she told no one about the alleged attack when she was 15 years old. However she later told a therapist, her husband and some friends. And Collins reply to Trump's assertions about reporting sexual assault gave Ford's account credence.

"I was appalled by the President’s tweet," Collins said when asked for her reaction to Trump's claims on Twitter.

"So I thought that the President’s tweet was completely inappropriate and wrong."

Republican Senator Chuck Grassley of Iowa—chair of the Senate Judiciary Committee—issued an ultimatum to Dr. Ford to appear and provide testimony on Monday or not at all. However, Dr. Ford asked to testify later in the week. She met Friday with FBI officials in San Francisco to discuss death threats she received after her allegations went public.

Ford's lawyer asked the Senate Judiciary Committee to delay her testimony—planned and scheduled without her input—set for Monday, September 24, until Thursday, September 27. They also requested the committee take testimony from witnesses in addition to just Ford and Kavanaugh, as was done during the confirmation hearing of Justice Clarence Thomas.

Democratic Senators Mazie Hirono of Hawaii and Kirsten Gillibrand of New York accused Grassley and the GOP of bullying Dr. Ford with their Monday deadline. They also questioned why Kavanaugh's hearing is being handled differently than Justice Thomas'.

And Maine's Republican Senator also disagreed with her GOP colleague's ultimatum. Collins would be comfortable allowing Ford to testify later in the week and said the Senate Judiciary Committee should make reasonable accommodations for her. Collins stated:

"I do think that both she and Judge Kavanaugh need to testify under oath, but I believe we should attempt to make this as comfortable a process for her as possible."

"To me Monday is the preferred date but I don’t see a problem with delaying to Wednesday or Thursday."

Senator Collins is under intense scrutiny as she may be a crucial vote in the Kavanaugh confirmation process. The Maine Republican stated the importance for her to hear from Ford.

"It’s very difficult to assess credibility if you don’t get to see the person or hear them and that’s what I want." With the attention placed on Collins and a few other key Republican Senators, news of her statements regarding Trump's Twitter post spread quickly online.

Many on Twitter discounted the Senator's statements based on prior ones she made.

@CNNPolitics @CNN Then do something about it, Senator Collins. There IS NO NEED TO FORCE THIS THROUGH AT FULL THRO… https://t.co/lJhvNZhWt8
— Chad Greve (@Chad Greve) 1537563614.0

@cnni Senator Susan Collins is disingenuous. If she cared at all, she would be demanding an FBI investigation into the Kavanaugh allegation.
— Didi B (@Didi B) 1537563574.0

When asked if she had a reaction regarding the protests, Collins stated:

"Not really. I’ve had protesters at my house, I understand there is another protest scheduled at my house, at my offices. That seems to be the way that people want to express their views and they are welcome to do so."

"I personally think that it’s far more constructive when someone sends me a well thought out email or a letter or call to my office. But people certainly have every right to protest, and they have certainly been exercising that right."

But another famous Maineiac recently disagreed with Collins disregard for the message from the protesters.