A medieval Italian woman not only gave birth to a baby inside her grave, she may have had a hole drilled into her skull to treat a common pregnancy complication. 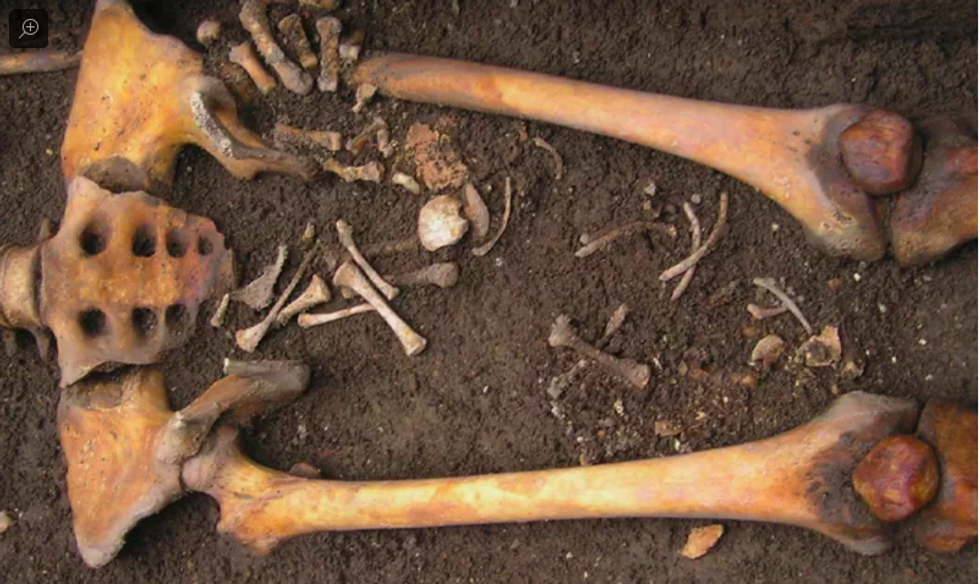 It was an archaeological mystery — a deceased adult woman from the Middle Ages, found buried in Imola, Italy, in a stone-lined grave with a scattering of small bones between her legs. In addition to the small bones, the woman also had a hole in her skull. Had she been shot? Attacked with a sharp object? The victim of a particularly nasty fall?

As it turns out, none of the above. According to scientists who recently published their findings in the science journal World Neurosurgery, the small bones were from what’s called a “coffin birth,” or more grimly, “postmortem fetal extrusion” — the woman had given birth to a deceased fetus in her grave. During this uncommon decomposition-phase event, gases build up in the body cavity of a dead pregnant woman, eventually forcing her fetus to become expelled. This particular woman was thought to have been 38 weeks pregnant, with the fetus already deceased when she was buried.

But what of the hole in the woman’s head? According to the scientists, the appearance of the hole excluded the possibility of violence, and was likely from a surgical procedure called trepanation. An ancient and once popular form of brain surgery, trepanation was a common treatment for eclampsia. Eclampsia is the progression of preeclampsia, a common pregnancy complication consisting of high blood pressure, potential organ damage and, in the case of eclampsia, seizures. Eclampsia is today treated with medication, but trepanation was the predominant treatment for centuries.

“Given the features of the wound and the late-stage pregnancy,” write the study authors, “our hypothesis is that the pregnant woman incurred preeclampsia or eclampsia, and she was treated with a frontal trepanation to relieve the intracranial pressure.”

Evidence of healing on the cut sections of bone indicates the woman lived for a short time after the procedure. Her cause of death, as well as that of the fetus, remains unknown, but it could well be that she died in childbirth, or the trepanation did not cure her eclampsia and she eventually succumbed.

“Historically, trepanation was used for treating several symptoms and disorders, such as cranial injuries, high intracranial pressure, convulsions, and high fever — all three of which are also caused by eclampsia,” Alba Pasini, study co-author, told Gizmodo. “Scientific literature — both medical and archaeo-anthropological — attests that [these symptoms] were treated through trepanation from prehistory to the contemporary era. We are sure, as reported in the paper, that this treatment did not heal the woman, since there are only the first signs of osteological reaction attesting the beginning of the healing process of the bone, indicating that the woman survived one week from the surgery at most.”

Coffin births are extremely rare, as are archeological findings of trepanation, so finding both together is unprecedented. Whether or not the trepanation did indeed have a link to the coffin birth may never be known, but it’s an important snapshot into medieval-era health practices, especially those involving women.

As bio-archaeologist Siân Halcrow of the University of Otago in New Zealand toldForbes: “It is pleasing to see a study that is focused on maternal and infant mortality and health in the past, because this subject is often overlooked.”