New Poll Reveals Each Party's Voter Enthusiasm Levels in the Wake of the Kavanaugh Fight, and It's Not What Republicans Were Hoping For 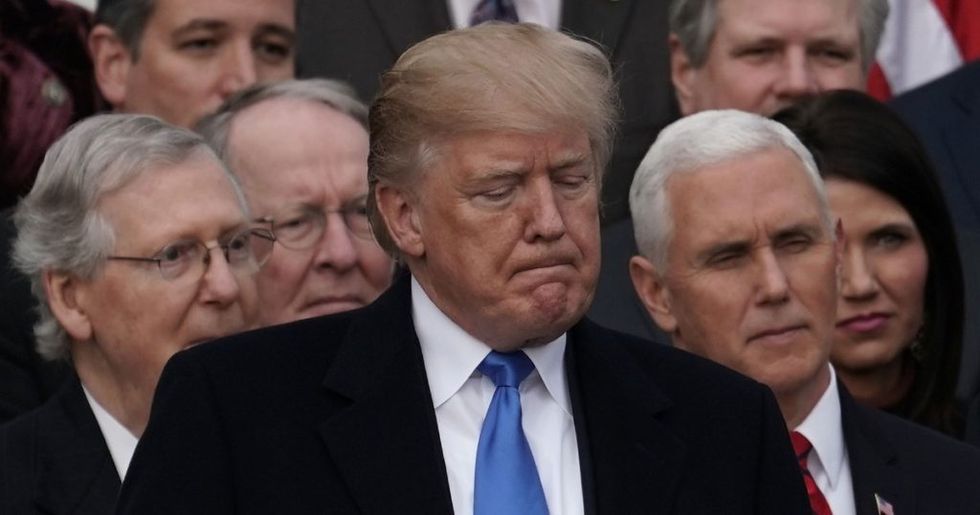 Democratic voter enthusiasm is surging with just one month to go until the midterm elections, a new CNN/SSRS poll released on Tuesday reveals.

Excitement about the upcoming election among Democrats and Democratic-leaning Independents has surged, with 62 percent of respondents saying they are either extremely enthusiastic or very enthusiastic to vote. That's a seven-point boost from September.

On the Republican side, enthusiasm has basically held steady, going from 50 to 52 percent since last month.

These numbers show that Republican hopes of a bump in enthusiasm within their party in the wake of Brett Kavanaugh's divisive confirmation to the Supreme Court may be nothing more than a desperate fantasy.

That's because Americans trust Democrats more than Republicans on the issue of sexual assault, allegations of which nearly sunk Kavanaugh's nomination, 50-39 percent, according to the poll.

Still, Republicans are adamant that they're winning.

On Monday, Senate Majority Leader Mitch McConnell (R-KY) said the ongoing protests of Kavanaugh, which he described as a "mob," “certainly had a good impact for us" and that Republicans "are pretty excited."

Democrats, McConnell claimed, "managed to deliver the only thing we hadn’t figured out how to do, which is to get our side fired up.”

That mob, the survey says, is set to trample Republicans in November.

CNN explains just how much momentum is swelling behind Democrats:

"In fact, Democrats' enthusiasm today more closely resembles the 2008 presidential election. Just before President Barack Obama was elected, 45% of Democrats and Democratic-leaners said they were extremely enthusiastic about voting that November. In 2008, Democrats won eight seats in the Senate and 21 in the House, as well as a victory in the presidency."

The poll has even more good news for Democrats hoping to ride a blue wave to victory, which this year means the potential to take back the U.S. House of Representatives.

"This is the widest margin of support for Democrats in a midterm cycle since 2006, when at this point, the party held a whopping 21-point lead over Republicans among likely voters," CNN noted. "That's also when Democrats seized control of the House from Republicans, making Nancy Pelosi speaker until 2011."

Like the enthusiasm gap, voter preference on a generic ballot defies the messaging coming from the White House.

Trump in recent weeks has boasted about a "red wave" he believes will help Republicans hang onto control of Congress. Since June, Trump has tweeted about a red wave seven times.

Republicans should stop wasting their time on Immigration until after we elect more Senators and Congressmen/women… https://t.co/4HZ9ZIiNfr
— Donald J. Trump (@Donald J. Trump) 1529665590.0

The president hasn't offered any evidence of this. In fact, a key demographic may spell doom for the party of Trump.

Women are especially emboldened to vote for Democrats in November, the survey said. Women plan on voting blue over red by a whopping 30-point margin - 63 to 33 percent. CNN said that if the polling data translates into actual votes, Democrats could see the most gains in the House since 1976, thanks to women voters.

Still, there is a little bit of light for Republicans.

The poll found that despite there being much higher levels of excitement for Democrats, Americans aren't convinced the party can pull off a resounding victory.

Half of those surveyed expect Republicans to hold on to Congress, compared to just 34 percent believing the same for Democrats.

Republicans also hold a slight edge over Democrats on which party Americans trust to handle the economy, 48-42 percent, and which can better manage national security issues, 50-39 percent.

On other issues, like health care, immigration, the Russia investigation, and the federal budget, however, Democrats are enjoying sizeable leads over Republicans.

All told, likely voters said they hoped Democrats manage to make big gains. The poll showed that 38 percent of Americans would prefer to have Democrats in control while 34 percent would rather have Republicans in charge.

Cautious optimism is building on Twitter - polls are promising, but people actually have to show up and vote.

The poll was conducted by the Social Sciences Research Services from October 4-7. Live interviewers polled 1,009 random adults by landline or cell phone. The margin of error is plus or minus 3.8 percentage points.