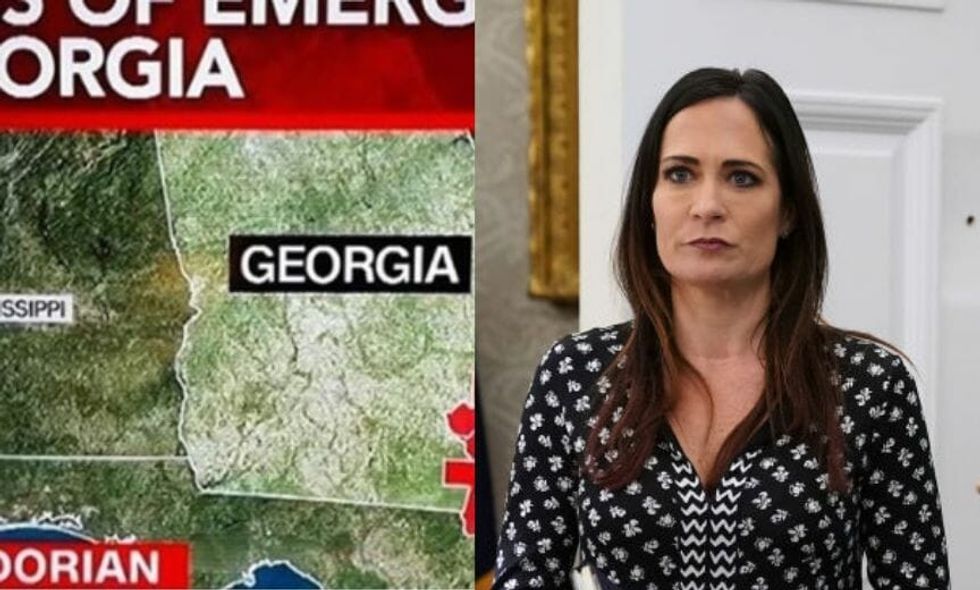 He brandished a National Oceanic and Atmospheric Association (NOAA) map that, instead of depicting the most recent trajectory of the hurricane, showed a six day old, inaccurate forecast. What's more, someonealtered the map with a black permanent marker to show the hurricane moving toward Alabama, justifying a false claim made by Trump two days earlier—a claim instantly refuted by the National Weather Service.

Trump continues to insist that the hurricane was originally projected to hit Alabama, inflating what would have been a simple misstatement into a scandal involving a false, doctored hurricane forecast being broadcast from the Oval Office.

Trump's latest Press Secretary, Stephanie Grisham, took to Twitter to chastise CNN for mislabeling the state of Alabama with its symmetrical neighbor, Mississippi.

While CNN erred in its labeling of Alabama, the network used its response to Grisham to point out how flabbergasting it is to see the President turn a misstatement into a cover-up, rather than just admitting it and moving on.

Grisham's attempt to turn the tables on CNN backfired, with Twitter applauding the network's clapback.

Others responded to Grisham's tweet with calls for her to hold her first official White House Press Briefing, a once-daily tradition that died with her predecessor, Sarah Huckabee Sanders.

@PressSec @CNN You should totally address this in your press briefings that YOU NEVER HAVE, “Press Secretary”.
— andy lassner (@andy lassner) 1567698126.0

While Trump and his press secretary are obsessing over proving wrongs right, Dorian is currently barreling up the Carolinas.