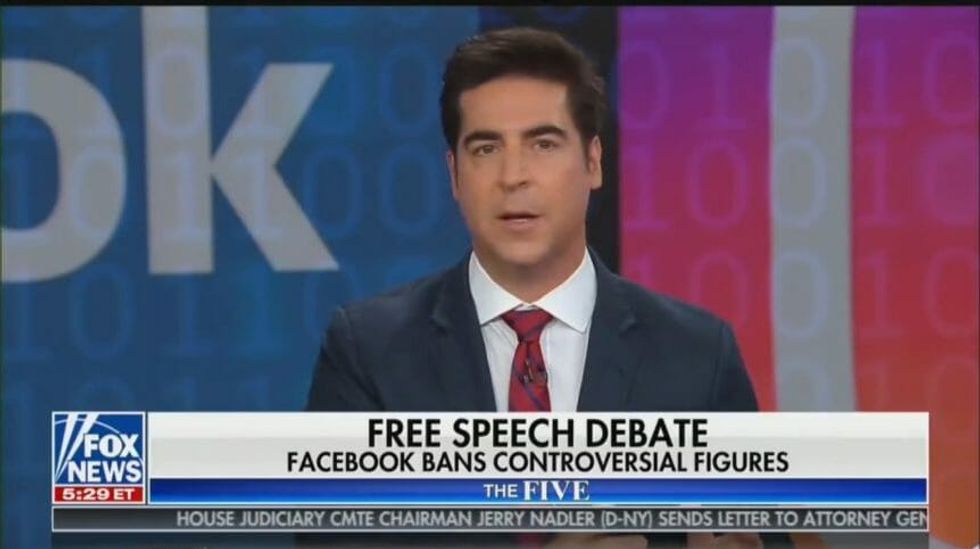 Social media came under fire the last few years for tolerating hate speech and allowing individuals to be targeted by conspiracy theorists with large online presences. One such person, Alex Jones of InfoWars, was eventually sued by some of the people he targeted.

Jones was banned by several platforms for his content. Now he has been banned by Facebook along with several others deemed "dangerous" by the social media company.

"[Facebook] always banned individuals or organizations that promote or engage in violence and hate, regardless of ideology."

They added, regarding the length of time it took to ban the latest round of six extremists:

"...the process for evaluating potential violators is extensive and it is what led us to our decision to remove these accounts..."

But Fox News featured another theory for the bans. Commentator Jesse Watters claimed a competing network was responsible for the bans, instead of the actions of the people banned.

Waters blamed CNN, claiming the network has people calling Facebook every day asking why "conservative" leaders are not banned yet. Watters, like many, mistook free speech with freedom from consequences.

Facebook, as a private company, is under no obligation to allow anyone who violates their terms of service to remain on their platform.

Watters said of his CNN theory:

"It’s pathetic where a media company is supposed to be about free speech and you spend all day on the phone trying to shut other people’s free speech down!"

But Oliver Darcy, who works for CNN and was targeted by Alex Jones, had his own definition of "pathetic."

"What's pathetic is when people like @JesseBWatters go on television and misrepresent the reporting of others."

What's pathetic is when people like @JesseBWatters go on television and misrepresent the reporting of others. https://t.co/GSa5iAAH2s
— Oliver Darcy (@Oliver Darcy) 1556920527.0

So who are the six people removed from Facebook and what did they choose to say or do?

One is Alex Jones whose ambush of Darcy and others outside committee hearings on Capital Hill in Washington DC got Jones ousted from Twitter. Watch Jones in action here:

Another is Laura Loomer who was also banned from numerous platforms for violations of their terms of service. You can see Loomer in action here also ambushing Darcy:

Darcy did an expose that listed clear terms of service violations by several of the people banned by social media platforms.

People tended to agree with Darcy's assessment of Watters remarks as well as bans on people like Jones and Loomer.

@justinbaragona Free speech like Alex Jones saying over and over that Sandy Hook was a hoax, causing more pain for… https://t.co/j8tE56jgtt
— Jordan Liles (@Jordan Liles) 1556922302.0