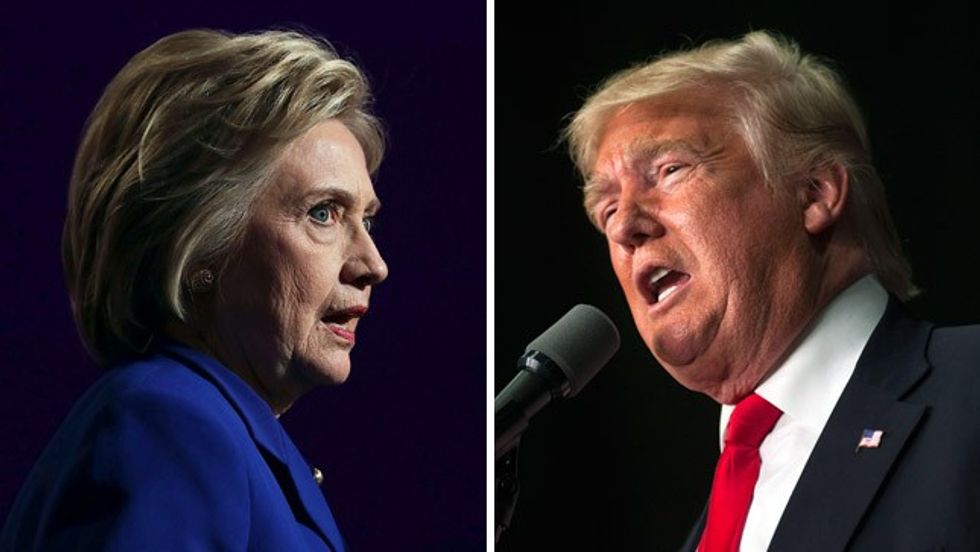 According to a source with knowledge of the request, a group of prominent computer scientists and election lawyers are urging Hillary Clinton's campaign to call for a recount of vote totals in Wisconsin, Michigan, and Pennsylvania––three swing states won by Donald Trump. The scientists believe they've found persuasive evidence that results in those three states may have been manipulated or hacked. The group, which includes voting-rights attorney John Bonifaz and J. Alex Halderman, the director of the University of Michigan Center for Computer Security and Society, presented their findings to top Clinton aides in a conference call last Thursday.

A source briefed on the call said the group spoke with Clinton campaign chairman John Podesta and campaign general counsel Marc Elias to make their case. They expressed concerns over a trend of Clinton performing worse––receiving 7 percent fewer votes––in counties that relied on electronic voting machines compared to paper ballots and optical scanners. Their statistical analysis revealed that Clinton may have been denied as many as 30,000 votes––she lost Wisconsin by 27,000. The group noted that while have not found explicit evidence of hacking or manipulation, they believe the suspicious trend is worthy of an independent review.

John Bonifaz, an attorney also pressing the case, did not respond to requests for comment by yesterday evening, and a message left with the president-elect's transition team was not returned. Halderman did, however, respond with an argument why the votes should be retallied in an article shortly after the news broke.

"Were this year’s deviations from pre-election polls the results of a cyberattack? Probably not," he wrote. "I believe the most likely explanation is that the polls were systematically wrong, rather than that the election was hacked. But I don’t believe that either one of these seemingly unlikely explanations is overwhelmingly more likely than the other. The only way to know whether a cyberattack changed the result is to closely examine the available physical evidence — paper ballots and voting equipment in critical states like Wisconsin, Michigan, and Pennsylvania. Unfortunately, nobody is ever going to examine that evidence unless candidates in those states act now, in the next several days, to petition for recounts."

But the Clinton campaign is running out of time to contest the election outcome. The deadline in Wisconsin to file for a recount is Friday. The deadline in Pennsylvania is Monday; Michigan's deadline is next Wednesday. It's still unclear whether Clinton will call for a recount, and a former Clinton aide declined to respond to questions about whether the campaign will request an audit based on these findings. As it stands, the circumstantial evidence would require both a recount and forensic audit of voting machines.

The campaign also faces several complications, says a senior Clinton adviser. The White House, now focused on a smooth transfer of power, does not want Clinton to contest the election results. Still, some Clinton allies are pushing for a recount. Among them: top Clinton aide Huma Abedin's sister, Heba, who encouraged her Facebook followers to lobby the Department of Justice to audit the vote.

Moreover, "faithless electors––members of the Electoral College who do not vote according to the popular vote in their states––could complicate matters further. At least six electoral voters have indicated they would not vote for Trump, despite the fact that he won the states they represent. According to a statement released Wednesday from a group called the Hamilton Electors,

those electors who have pledged to not vote for Trump seek a "reasonable Republican alternative for president through Electoral College."

"The Founding Fathers created the Electoral College as the last line of defense," one elector, Michael Baca, said in a statement, "and I think we must do all that we can to ensure that we have a reasonable Republican candidate who shares our American values."

Earlier this year, President Obama's administration accused Russia of hacking the Democratic National Committee. The denunciation came as individuals within the administration and lawmakers demanded the Office of the Director of National Intelligence and the Department of Homeland Security publicly name Moscow and hold it accountable for attempting to influence election results.

At the time, senior Democratic and Republican lawmakers expressed hope that the administration would punish the Kremlin and dissuade hackers from launching further attacks. Last month, however, election officials and cybersecurity experts said it would be virtually impossible for Russia to undermine, let alone influence, the election outcome. They agreed that hackers could create "chaos," but assured voters that the election system is resilient enough to withstand attacks or shocks. The key concern, these experts argued, is the sense of public distrust which can be orchestrated and easily achieved without attacks from hackers.

Much more needs to be done "to secure America’s elections," writes Halderman, "and important new safeguards could be put in place by 2018. States still using paperless voting machines should replace them with optical scan systems, and all states should update their audit and recount procedures. There are fast and inexpensive ways to verify (or correct) computer voting results using a risk-limiting audit, a statistical method that involves manually inspecting randomly selected paper ballots. Officials need to begin preparing soon to make sure all of these improvements are ready before the next big election."