He had an audience of one. 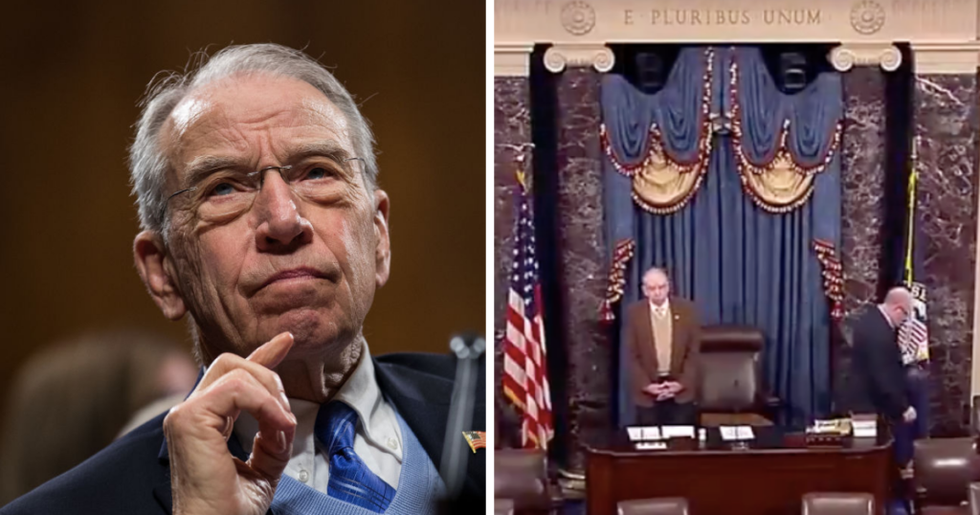 Senator Chuck Grassley (R-IA) wants to avoid another government shutdown. That's the pointed message he sent President Donald Trump as he spoke from the dais after the Senate's official morning prayer to open Senate business.

"Let’s all pray that the president will have wisdom to sign the bill so government doesn’t shut down,” Grassley said in his capacity as presiding officer of the Senate.

While the vice president is technically the Senate's presiding officer, he's not there all day, so it falls to senators from the majority party to maintain order and decorum on the Senate floor. However, Senate rules dictate that the presiding officer should not editorialize from the dais, as Senator Chris Murphy (D-CT) noted.

The rules don't allow presiding officers to editorialize from the dais, so in the staid world of the Senate, this i… https://t.co/USL0U6AxJj
— Chris Murphy (@Chris Murphy) 1550158656.0

Ira Shapiro, a consultant and author of Broken: Can the Senate Save Itself and the Country? concurred.

“It is unusual for the presiding officer to make a statement like that,” he said. “Generally, senators play a more neutral role while sitting as presiding officer. Senator Grassley is notoriously and admirably independent and outspoken, and these are unusual times.”

While the moment was an out of character one for the usually staid Grassley, critics noted that the Senate does have the power to avoid a shutdown: Senators would only have to pass a bill with a veto-proof majority.

@cspan @ChuckGrassley Or you could organize to make sure if he vetoes the bill you can override it, but sure, let's pray instead.
— Asher Delion (@Asher Delion) 1550158420.0

The president has yet to commit to a deal that would avert another government shutdown, though word on Capitol Hill suggests that he will.

Although the ever-mercurial Trump capitulated to the demands of Congressional Democrats to reopen the government last month, he has consistently implied that he would shut it down again when the continuing resolution that reopened the government expires tomorrow, February 15.

The previous shutdown, at 35 days, was the longest one in our nation's history, and it had devastating effects on the national economy. According to an estimate from the Congressional Budget Office, the shutdown cost approximately $11 billion. The official report noted that $13 billion was likely permanently lost, unable to be recovered by federal employees returning to work:

As Second Nexus noted in a January 28 report:

"The immediate amount is almost double the $5.7 billion demanded by Trump to fund a wall at the southern border. Trump’s insistence on the funding allegation is the reason a majority of Americans blame him for the disastrous shutdown. The $3 billion dollars permanently lost is more than half of the allocation he was demanding."

The president's response to the prior shutdown was widely criticized.

As the shutdown, which kicked off in December 2018 after he declined to sign a stopgap funding bill because he disagreed with the decision of Congress not to provide the funding he’d requested for his proposed border wall, wore on, he insisted that it was simply a ploy by Democrats to cost him re-election.

In fact, the president’s insistence on blaming Democrats for the shutdown contradicts his own statements. In December, he preemptively accepted ownership of a then-possible shutdown.

The GOP has continued to face heavy criticism for placating the president and claiming that House Speaker Nancy Pelosi and Senate Minority Leader Chuck Schumer’s unwillingness to negotiate had caused the shutdown.

The president has insisted that border security is unachievable without a wall at the southern border. He’s been quick to remind the American people this as the government shutdown over the wall’s funding rages on and continues to use his Twitter account to advocate for the wall’s construction.

I want to thank all Republicans for the work you have done in dealing with the Radical Left on Border Security. Not… https://t.co/BDiGlzkvAg
— Donald J. Trump (@Donald J. Trump) 1550028221.0

"I don’t want to see a shutdown. A shutdown would be a terrible thing,” Trump told reporters in the Oval Office yesterday, adding that he had “options that most people don’t understand” to build the wall without approval from Congress.