New Time Magazine Cover Uses Words From Christine Blasey Ford's Own Testimony to Illustrate Her, and People Are Blown Away 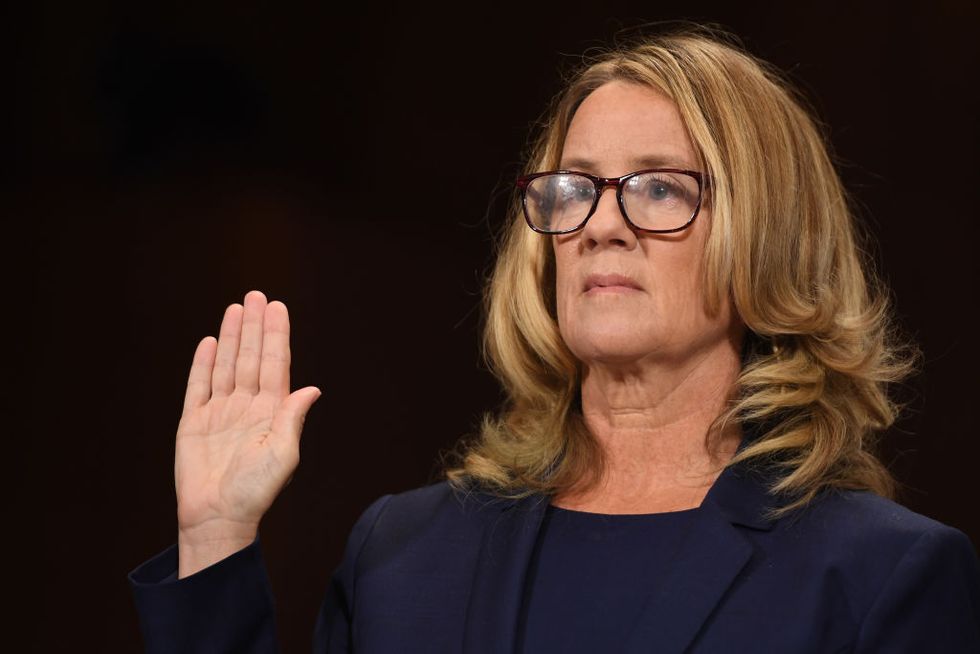 Christine Blasey Ford, the woman accusing Supreme Court nominee Brett Kavanaugh of sexually assaulting her at a party 36 years ago, testifies before the US Senate Judiciary Committee on Capitol Hill in Washington, DC, September 27, 2018. (Photo by SAUL LOEB/AFP/Getty Images)

Dr. Christine Blasey Ford's momentous testimony against Supreme Court nominee Judge Brett Kavanaugh last week took the world by storm, with many believing her to be sincere and straightforward, brave in spite of fear. Now, Time is putting her words at the forefront of its story in a cover by San Francisco artist John Mavroudis.

And, as it turns out, a thousand words is worth a picture.

Time posted an animated version of the cover to its own Twitter feed.

Mavroudis described the process he used to create the stunning image:

“This particular process is like putting a jigsaw puzzle together, but with an infinite number of possibilities. I started with an image of Ford and then drew the words in where they might be appropriate. The memory quotes would be attached to her forehead area, and the quotes about wanting to help I placed on her hand. The hand could be seen as welcoming, but also deflecting. It’s a fascinating process to watch the face take shape, while hoping that you’ve captured the essence.”

Twitter users are spellbound, with many believing the image to embody the #MeToo movement and women's rights at this moment in American society.

@TIME cover is very powerful and captures the very essence of the desire for belief & change in America. A nation… https://t.co/Lp0wohFAwt
— Tris Resists (@Tris Resists) 1538659392.0

Ford's testimony captivated the nation and furthered the dialogue around sexual assault. After Dr. Ford testified, calls to the National Sexual Assault Hotline increased by 201 percent. The same words used to create the Time cover were also the ones that inspired other survivors to come forward.

The TIME article that inspired the cover gives Ford's testimony its due.

In the article behind the cover, writer Haley Sweetland Edwards discusses the gravity of Ford's courage and subsequent testimony:

By the time the hearing ended, Ford had done more than prove herself a credible witness. For millions of women and men, she had replaced Kavanaugh as the protagonist in the nomination narrative.

As Edwards points out, the hashtag #WhyIDidntReport skyrocketed on Twitter, with women coming forward to defend Ford's reasoning for keeping the alleged assault secret for decades.

Why don’t women report? Because yesterday I went public on FB with my own sexual assault, and this is an actual c… https://t.co/XTcWDAF8dQ
— Stephanie Tait (@Stephanie Tait) 1538205900.0

Ford has been ceaselessly berated and mocked by even the President of the United States. In the wee hours of October 4, the White House submitted findings from the FBI investigation of Kavanaugh to senators, with White House spokespeople claiming that the investigation found no reasons to halt Kavanaugh's nomination. Many are saying the scope of the investigation was too small and its time too limited.

Regardless, Ford's testimony appears to have been a milestone in America's effort to address the rampant problem of sexual assault. Through Ford's words, others are finding their own.