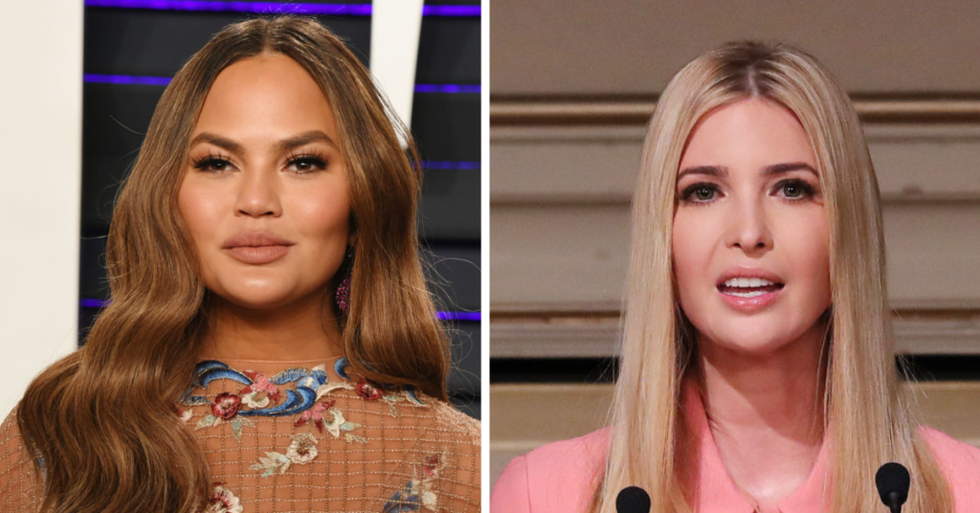 Many concurred with Teigen's remarks.

@thehill She is absolutely right. The psychological torture these children are suffering having been ripped from th… https://t.co/LM4eemVTh4
— Spicoli 🌊🏄‍♂️ (@Spicoli 🌊🏄‍♂️) 1554996375.0

@CNNPolitics Chrissy speaks from the heart. From a good place. Ivanka is the opposite.
— Ricardo Winters (@Ricardo Winters) 1555022339.0

Teigen, whom President Donald Trump has actually blocked on Twitter, also discussed how the Trump administration has impacted her mental health. She said she needed to take a step back from weighing in on political issues because of attacks on social media.

"I couldn't read the messages that I was being sent because, of course, Donald more than anything he says and does, he opened a world, opened up a window to all these people that felt like it became OK to be just as nasty as him, and it made it acceptable and I didn't want to be a part of that anymore," she said.

Last year, Ivanka Trump appeared to distance herself from her father when she declared herself "vehemently against" family separation.

Months later, she said her job as a member of the Trump administration "is not to share my viewpoint when they diverge" in response to a question about how she can "reconcile" support for women's initiatives with the administration's policies, including family separation.

In February, the House Oversight Committee voted to issue subpoenas to the Departments of Justice, Homeland Security, and Health and Human Services in a move to hold the Trump administration accountable for the human suffering caused by its “zero tolerance” family separations policy at the U.S.-Mexico border.

The committee is demanding information related to “the children separated, location and facilities where they were held, details on their parents, information on efforts to restore children to their parents and whether parents were deported,” according to a report from NBC News.

President Donald Trump had previously admitted that his administration’s policy of separating families was a negotiating tool to get Democrats to cave to his demands (which include tougher border security as well as a wall erected along the nation’s southern border).

Medical professionals have also spoken out about the “irreparable harm” to separated migrant children, warning of the effects “toxic stress” can have on a child’s brain development and long-term health.