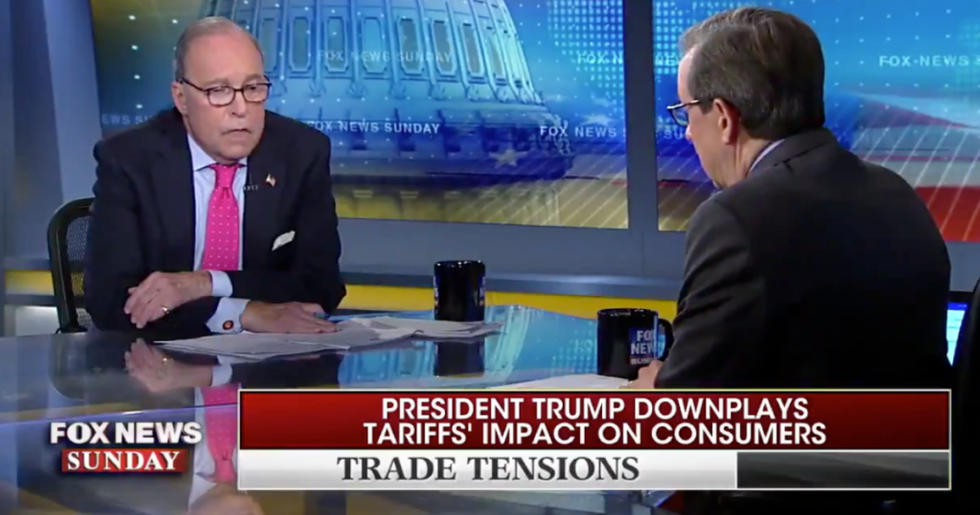 Last week, President Donald Trump again claimed that China is footing the bill for the tariffs his administration has imposed on imported goods after the most recent round of trade talks collapsed.

"Talks with China continue in a very congenial manner - there is absolutely no need to rush - as Tariffs are NOW being paid to the United States by China of 25% on 250 Billion Dollars worth of goods & products. These massive payments go directly to the Treasury of the U.S...."

Talks with China continue in a very congenial manner - there is absolutely no need to rush - as Tariffs are NOW bei… https://t.co/cQEBUELnlg
— Donald J. Trump (@Donald J. Trump) 1557488636.0

On Sunday, however, one of Trump's chief economic policy advisors admitted that Trump is not telling the truth about how tariffs work.

Chris talks to @larry_kudlow about who actually pays the tariffs with China if they were to be imposed #FNS https://t.co/cwl89OyLDK
— FoxNewsSunday (@FoxNewsSunday) 1557667791.0

In an interview with Chris Wallace on Fox News Sunday, Larry Kudlow was forced to counter Trump's false narrative about who is really feeling the pinch.

"It’s not China that pays tariffs. It’s the American importers, the American companies that pay what in effect is a tax increase and oftentimes passes it on to U.S. consumers," Wallace said.

"Fair enough. In fact, both sides will pay in these things, and of course it depends," Kudlow replied.

Wallace checked him on that too.

"if it’s a tariff on goods coming into the country, the Chinese aren’t paying," he said..

"They may suffer consequences, but it’s U.S. businesses and U.S. consumers who pay, correct?" he later continued.

"Yes, to some extent, I don't disagree with that," Kudlow said. "Both sides will suffer on this."

Indeed, Wallace is correct. The Associated Press noted on Saturday that "tariffs are paid by American companies, which usually pass the cost on to consumers through higher prices."

Farmers and manufacturing workers among Trump’s political base have been among the hardest hit, and the president has repeatedly - and falsely- claimed that China has totally abandoned their products.

"Your all time favorite President got tired of waiting for China to help out and start buying from our FARMERS, the greatest anywhere in the World!" Trump tweeted on Friday.

Your all time favorite President got tired of waiting for China to help out and start buying from our FARMERS, the… https://t.co/C3vSSlFkzB
— Donald J. Trump (@Donald J. Trump) 1557492927.0

AP shredded this assertion as well.

In another tweet, Trump furthered his bogus characterization of tariffs by claiming they will "bring in FAR MORE wealth to our Country than even a phenomenal deal of the traditional kind. Also, much easier & quicker to do. Our Farmers will do better, faster, and starving nations can now be helped. Waivers on some products will be granted, or go to new source!"

Tariffs will bring in FAR MORE wealth to our Country than even a phenomenal deal of the traditional kind. Also, muc… https://t.co/fmxFehCNe3
— Donald J. Trump (@Donald J. Trump) 1557488776.0

"Tariffs are a drag on growth," AP pointed out. "Economists at Nomura note that gross domestic product this year could take a hit of as much as 0.4% if Trump expands the taxes to all Chinese imports as business confidence slumped and financial conditions tightened."

As of Monday, Trump still does not appear to grasp any of this. In a series of early-morning typo-filled tweets, Trump's message became even more convoluted.

"Their [sic] is no reason for the U.S. Consumer to pay the Tariffs, which take effect on China today," Trump wrote.

"The tariffs can be completely avoided if you by [sic] from a non-Tariffed Country, or you buy the product inside the USA (the best idea)," he added. "That’s Zero Tariffs."

"There will be nobody left in China to do business with," he continued. "Very bad for China, very good for USA! But China has taken so advantage [sic] of the U.S. for so many years, that they are way ahead (Our Presidents did not do the job). Therefore, China should not retaliate-will only get worse!"

What Trump is failing to understand is that China is turning elsewhere for crops that they used to buy from American farmers, such as soybeans.

“Many countries have the willingness and they totally have the capacity to take over the market share the U.S. is enjoying in China. If other countries become reliable suppliers for China, it will be very difficult for the U.S. to regain the market,” Chinese Vice Agricultural Minister Han Jun told official Xinhua news agency in an interview last August.

“Levying additional tariffs will cause a great decrease in exports of U.S. agricultural products to China,” Han said. “But the impact on China is very limited, due to the diversified import sources.”

Some of us get it, at least.

@realDonaldTrump They don't need the deal. We do. Because so many of our products come from China, we are paying… https://t.co/pniTUmzbY9
— marguerite volonts (@marguerite volonts) 1557751132.0

@realDonaldTrump If companies move to Vietnam or elsewhere too buy their goods it then only shifts the trade imbala… https://t.co/v3XUGM0h8S
— Leonard Decant (@Leonard Decant) 1557752048.0

@realDonaldTrump The middle part of the country voted for you & you have screwed them the most...welfare taxes for… https://t.co/6mUJz6XOT4
— maggie peterson (@maggie peterson) 1557751444.0

@realDonaldTrump They want to make a deal so badly they walked away without a deal. Makes perfect sense.
— Mark Segreto (@Mark Segreto) 1557754067.0

Perhaps Trump could lead by example and manufacture his swag in the United States?

Yeah right. Tired of winning yet?