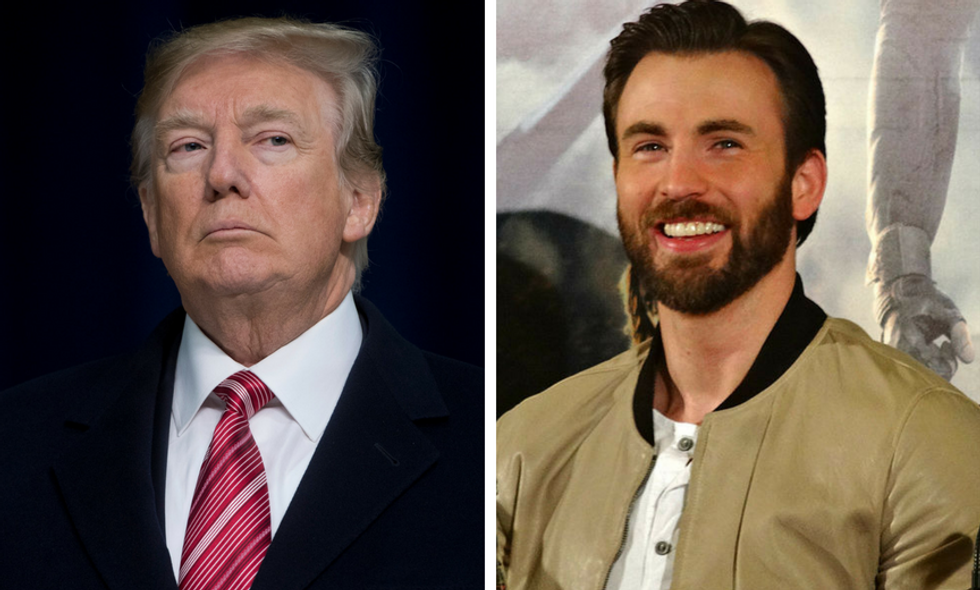 Actor Chris Evans, a.k.a Captain America, shredded President Donald Trump on Twitter Monday afternoon after the president misspelled "counsel" while referencing White House Counsel Don McGahn, who, it was revealed over the weekend, has given more than 30 hours of witness testimony to Special Counsel Robert Mueller.

Trump tweeted Monday morning that "White House Councel" had met with Mueller "only with my approval, for purposes of transparency."

Evans blasted the president's typo. "It’s ‘counsel’, Biff," Evans wrote. "The word is ‘counsel.'" Evans laid into the president for screwing up a word he must be quite familiar with by now.

Trump has a propensity for tweeting misspelled words, especially when he does so out of anger or frustration. Last month, Trump tweeted about his wife, "Melanie," rather than Melania. In other instances, Trump has deleted the typo-ridden tweets, which is a violation of the Presidential Records Act.

Over the weekend, the New York Times reported that McGahn has given more than 30 hours of witness testimony to Mueller, though the president maintains his lawyer was acting at his behest.

Twitter lauded Evans on his chastising of Trump, whose sloppy tweets continue to embarrass the American public.

Others responded directly to Trump, unhappy with his mistreatment of accomplished figures like Mueller.

Trump's go-to line of "13 angry Democrats" holds no water because "Robert Mueller is a highly respected professional FBI agent, a Republican and more importantly a US Marine."

@realDonaldTrump Disgraced and discredited? Please explain. Do you just make this shit up out of whole cloth?
— John Sipher (@John Sipher) 1534794126.0

People are getting fed up.

Some think Trump's obstruction of justice is obvious.

@realDonaldTrump How and in what way is this NOT obstructing an ongoing criminal investigation? And why do you cont… https://t.co/MOK5GVMjPd
— Andrew Hidas (@Andrew Hidas) 1534789500.0

Trump isn't in a position to call those investigating him "thugs."

@realDonaldTrump Robert Mueller has not been disgraced or discredited. There are no angry Democrat thugs and you,… https://t.co/XZ0EKUofTc
— Diana Zinn (@Diana Zinn) 1534791539.0

Perhaps Trump doth protest too much?

Trump's tweets are also fodder for Mueller, who it has been reported is using them as evidence in his investigation into whether Trump obstructed justice by firing FBI Director James Comey.