Chris Evans Just Savaged Lindsey Graham After He Urged Donald Trump to Declare a National Emergency to Build His Wall, and Now Graham Has a New Nickname 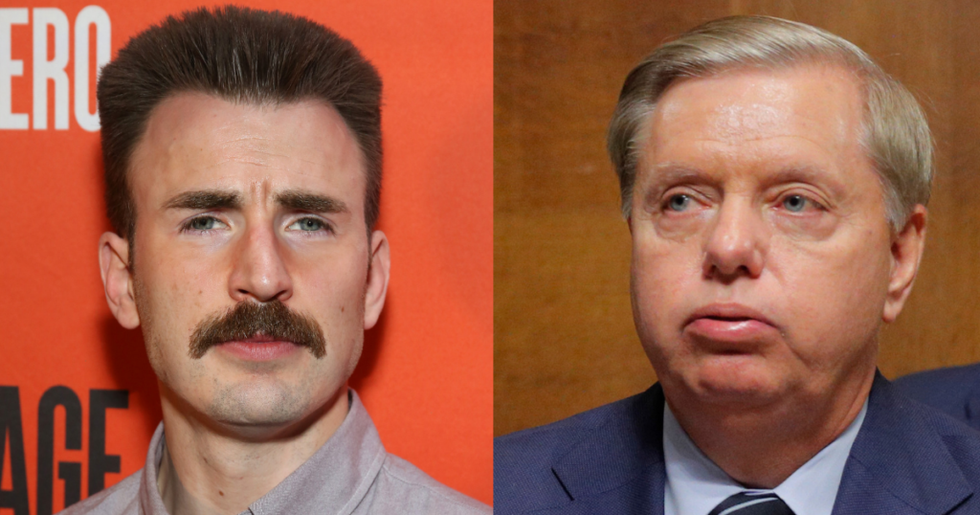 Senator Lindsey Graham (R-SC), once a fierce opponent to Donald Trump's candidacy for president, has evolved into one of the Trump's most loyal peons.

“You know how you make America great again? Tell Donald Trump to go to hell,” Graham said of candidate Trump in 2015.

Graham was no fan of Trump before the election.

But on Friday, Graham encouraged Trump to declare a national emergency in order to construct a wall along the southern border - an "emergency" that does not really exist.

On Saturday, the chiseled actor tore into Graham on Twitter, likening Trump's buddy to Waylon Smithers, the closeted gay assistant to the villainous Mr. Burns from The Simpsons.

On the show, Smithers' perpetual loyalty to Burns, which Evans compared to a suckerfish, is topped only by Smithers' deep, aching love for the 104-year-old billionaire.

"Hey Smithers, remember when you said this: ‘You know how you make America great again, tell Donald Trump to go to hell.’ What do they have on you?" Evans wrote. "I can’t tell if this shameful 180 is born of fear or thirst. Either way, we will always remember you as nothing more than remora."

Meanwhile, others are lashing out at Graham for pushing Trump toward dictatorship.

Presidents cannot just do what they want.

@LindseyGrahamSC @realDonaldTrump The president IS the cause of the shutdown. Declaring a state of emergency would… https://t.co/sYeflmCtSc
— Melissa Wilhorn (@Melissa Wilhorn) 1547412422.0

Does Graham really want to open this political Pandora's Box?

@LindseyGrahamSC @realDonaldTrump You should be ashamed of this and of the precedent it sets. What if the next Pres… https://t.co/iWVJA3afIr
— Tom Coates (@Tom Coates) 1547232890.0

@LindseyGrahamSC @realDonaldTrump So you do not believe in our system of checks and balances that uses congress and… https://t.co/TFjFmdVLC1
— Mel (@Mel) 1547380454.0

The emergency is sitting in the Oval Office.

@LindseyGrahamSC @realDonaldTrump What emergency? Illegal immigration is at an all time low.
— The Cravenator (@The Cravenator) 1547405025.0

On Saturday, Trump backed away from his threat to invoke emergency powers under mounting pressure from his advisors and some Congressional Republicans.

“What we’re not looking to do right now is a national emergency,” Trump told reporters, though a few seconds later, he left the door open to that possibility in the future.

Trump shut down the federal government on December 22 after Congress refused to grant funding for a border wall. Negotiations to end the shutdown, now halfway into its fourth week, have stalled.

On Friday, Trump ordered the Army Corps of Engineers to look into siphoning disaster relief funds from hurricane-torn Puerto Rico, Florida, and Texas, as well as wildfire-ravaged California to pay for for the construction of a wall.

This, however, would not bring the government any closer to reopening. Recent estimates pegged the cost of the shutdown at roughly $1.2 billion per week.

Tired of winning yet?