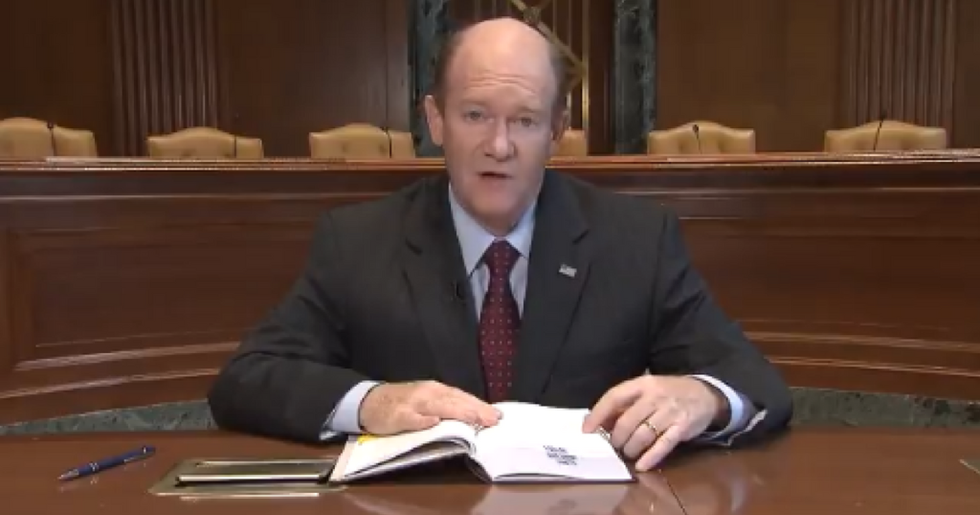 Senator Chris Coons (D-DE) took it upon himself to educate President Donald Trump's legal team about what "collusion" means and if it is, in fact, a crime.

Trump and his TV lawyer Rudy Giuliani have maintained that collusion is not a crime, while Special Counsel Robert Mueller has been investigating whether people within Trump's campaign cooperated with Russian efforts to sway the 2016 election.

In a video posted to Twitter on Wednesday, Coons outlined precisely why collusion as described above is a crime, specifically targeting the time Trump asked Russia to hack the Democratic National Committee in 2016.

"I took the liberty of looking into the United States code," Coons said as he opened the book containing the law Trump and his lawyers wish didn't exist.

It shall be unlawful for a foreign national, directly or indirectly, to make a contribution or donation of money or other thing of value in connection to a federal, state, or local election.

Or for a person to solicit, accept, or receive a contribution or donation described above from a foreign national.

The Senator explained how this ties into Trump and his presidential campaign's alleged clandestine activities.

"It seems pretty clear to me," Coons said, "that anything like a treasure trove of thousands of hacked emails (it is a thing of value), being solicited, accepted by an American campaign from Russian nationals would be a clear violation of U.S. code."

Actions to work together with Russian nationals to subvert our code would be illegal collusion.

On July 27, 2016, Trump urged Russia to hack the DNC and to try to dig up Hillary Clinton's alleged missing emails. That very night, DNC servers were breached by Russian hackers and thousands of emails were stolen and later published online by Wikileaks.

Coons offered some advice to Giuliani in his closing remarks.

"My advice to Rudy Giuliani would be instead of arguing that it isn't illegal, to advise his client to cooperate fully with the Mueller investigation, in the hope and expectation that if he is innocent he will be fully cleared," Coons said. "And if not, that our laws will be enforced."

@JRubinBlogger @ChrisCoons @realDonaldTrump @RudyGiuliani Thanks for helping get this out
— Stiff L Man (@Stiff L Man) 1533160272.0

Some additional advice was given to Giuliani: tell Trump to do what Nixon did: resign.

For some, the evidence of collusion between Trump and the Russians is obvious.

In closing, some words of wisdom from President Teddy Roosevelt: