Chris Christie Just Explained Why the Michael Cohen Hearing Should Be 'Concerning to the White House', and It's Surprisingly On Point 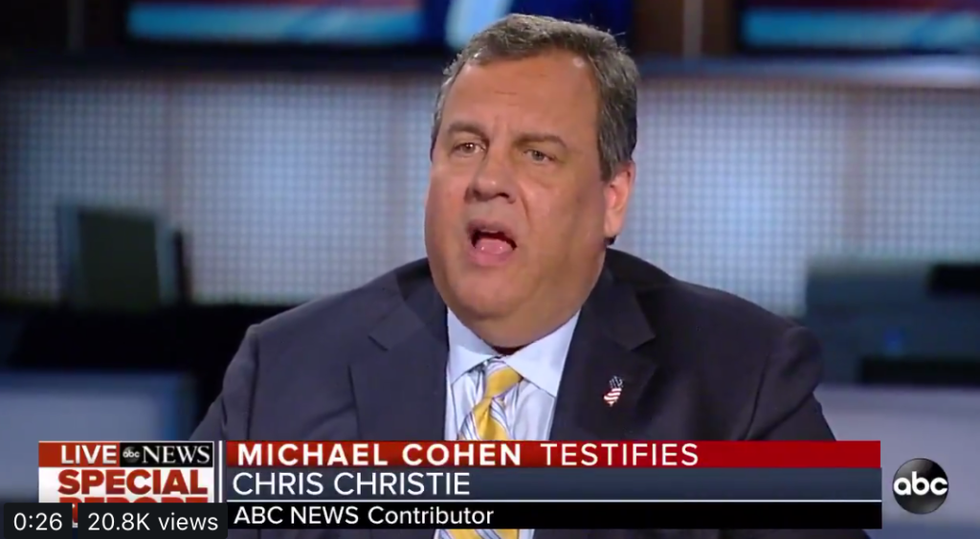 Shocker: Republicans on the House Oversight and Reform Committee are jumping to President Trump's defense over Michael Cohen's damning testimony.

"Where's the defense of the president?" asks longtime Trump supporter Chris Christie during a segment on ABC news.

"There hasn't been one Republican yet who's tried to defend the president on the substance. I think that's something that should be concerning to the White House."

Chris Christie on Michael Cohen testimony: "There hasn't been one Republican yet who's tried to defend the presiden… https://t.co/rhC8JuCqCr
— This Week (@This Week) 1551287883.0

Cohen testified before the House Oversight and Reform Committee that he had served for years as Trump's "fixer," paying hush money to women like Stormy Daniels and making threats on Trump's behalf. He assailed President Trump's character, calling him a racist and a cheat.

During the trial, Republicans blasted Cohen for his testimony - but not one of them spoke out in defense of the president.

@ThisWeekABC Well, first of all, there is no defense. And second, the Republicans should be defending the Constitu… https://t.co/mSbERfgDLd
— Nancy Staack (@Nancy Staack) 1551289213.0

Not even Cohen could overlook the glaring lack of support. "I find it interesting that not one question from you today has been about Mr. Trump," he said.

"He’s not a credible witness," Christie said of Cohen, "but he does have corroboration on certain things."

Some of the corroborating evidence? A copy of a check signed by Trump personally to reimburse Cohen for hush money he'd paid on the president's behalf.

Michael Cohen on Donald Trump paying him back for hush money payments: "The President of the United States thus wro… https://t.co/VTqVkck6og
— Meet the Press (@Meet the Press) 1551282378.0

Michael Cohen says he was pressured by the president to lie to first lady Melania Trump about hush money payments p… https://t.co/6SjbUcLIB9
— The Boston Globe (@The Boston Globe) 1551303125.0

Christie asked "Why are no Republicans standing up and defending the president on the substance?" What defense does Christie think they have against these allegations of presidential misconduct?