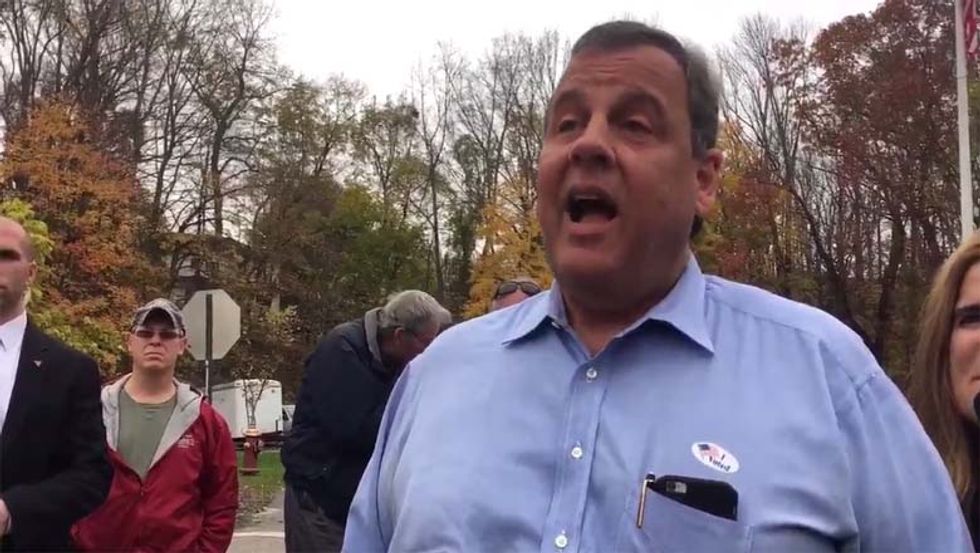 After voting, Christie got into a bit of an argument with a voter who questioned why he didn't merge His two towns https://t.co/n3AQi3PfBk
— Nick Corasaniti (@Nick Corasaniti) 1510070984.0

Governor Chris Christie got into with a voter today after voting himself. The woman asked him why he didn't merge Mendham Township and Mendham Borough. You can watch the heated exchange above.

"The easiest thing in the world is to stand where you stand and stand on the sidelines and critique. You're the one here doing the critiquing... It's easier to sit here and complain... But you know what, that's the joy of public service. It's servicing folks like you that really is a unique joy," Christie told the woman.

People in the background can be heard telling the woman to move along.

The Township and the Borough often argue over public utilities.

New Jersey will go to the polls to elect a new governor to replace Christie, who has served as governor since 2010 and is term-limited out.

If you are a New Jersey voter, polls open at 7 AM and close at 7 PM EST. You can find your polling place here.

Polls currently show Murphy has a strong chance of winning. Real Clear Politics shows he enjoys the support of 49.7% among registered voters in the state. Polls out of Rasmussen Reports (50%), Monmouth University (53%) and Quinnipiac University (57%) predict similar outcomes.

Other races New Jersey will be voting on that day include the State Senate and the State House. 15 school board elections are also taking place; two school districts held elections on April 25, 2017. Two statewide ballot measures were also certified for the ballot, including The Revenue from Environmental Damage Lawsuits Dedicated to Environmental Projects Amendment, which would "dedicate state revenue from settlements in environmental contamination lawsuits toward environmental projects," and The Bonds for Public Libraries Measure, which would "issue $125 million in bonds to provide grants to public libraries."