China Just Fired Back Against Trump's Tariffs With Tariffs of Their Own, and Yep, Trump's Own Supporters Are Getting Slammed

Trade war is on. 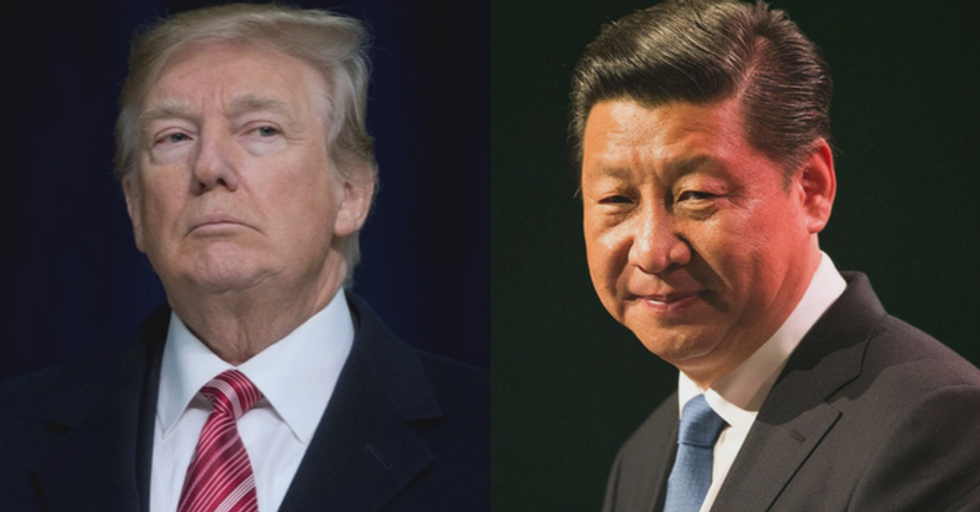 When you’re almost 800 Billion Dollars a year down on Trade, you can’t lose a Trade War! The U.S. has been ripped off by other countries for years on Trade, time to get smart!"

Now that China has set retaliatory tariffs to the tune of $34 billion, the president will get a chance to test his theory. Can the United States lose in the trade war he started?

China has focused their first salvo of the war on agricultural products, cars and crude oil. And their targets may impact Trump and the Republican party in November.

The Chinese agricultural tariffs —primarily on soybeans, corn, pork and poultry— hit at the heart of red states that voted for Trump in 2016. If Trump's decision to start a trade war with pretty much everyone except Russia and North Korea devastates farms and the related industries in those states, that voting block may choose not to vote this November or vote against the Republican Party.

With hopes to retain control of both houses of congress and the furtherance of his agenda on the line, the president cannot afford to anger once loyal supporters just 4 months before the midterm elections.

Trump's choice of what Chinese products to impose with tariffs points to giving a market advantage domestically to some U.S. companies over other U.S. companies. Those U.S. companies that import their components or raw materials from China will be hurt, while those with other trading partners will benefit from Trump's tariffs.

But the Chinese tariffs on the U.S.?  China’s retaliatory tariffs are set to affect huge sections of the American heartland and deep south where the primary targets are produced.

According to a report from Moody’s Analytics, the Chinese tariffs will fall especially hard on Trump voters. The data analysis firm went county by county in states where the affected products are exported to China.

In nearly 20% of counties that voted Trump in 2016, more than 25% of the county's economy will be affected. That impact will be felt be about eight million people.

Meanwhile, only 3% of counties that voted blue in 2016, about 1.1 million people, will feel that level of economic impact. This doesn't look like Trump supporters winning.

Outside of that, it’s hard to identify anyone who benefits to any significant degree. The areas that suffer are broader and more diffuse. The agricultural areas get nailed. Some of the manufacturing centers get hurt as well.”

“If it’s over 25%, there’s a pretty good chance that the economy [in that county] is going to feel it pretty significantly, could even contract, and see unemployment rise.”

Friday was the starting point for both sides tariffs to take affect. Halfway around the globe, the internet watched one cargo ship, Peak Pegasus, carrying U.S. soybeans race to get to its Chinese port to beat the clock. They missed it and will now face a 25% tariff.

But the United States fired the first shot.

The U.S. imposed their tariffs on $34 billion in Chinese goods early Friday. This act officially launched the trade war between the world’s two largest economies.

Within moments, having waited to see if the Trump administration would carry through on their threats, Beijing fired back with their retaliatory strike.

China also accused the U.S. of violating World Trade Organization rules and of setting off,

the largest trade war in economic history to date.”

The president has not yet commented on today's launch of his trade war on Twitter despite having boasted about it repeatedly before his administration fired the first shot Friday. But plenty of others did have something to say.

@politico He starts the biggest trade war in history with China then its announced he’ll continue making even more… https://t.co/ejCdVNdbdb
— Justice Will Reign (@Justice Will Reign) 1530877522.0