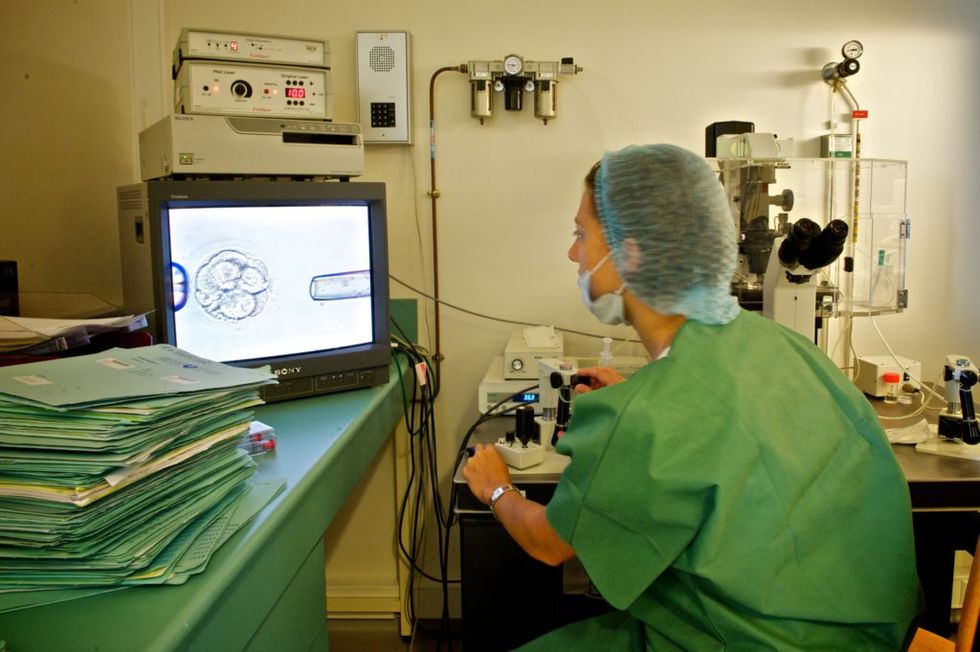 It’s a tragic situation when a child is orphaned virtually upon birth, but in a first-of-its-kind birth in China recently, a newborn was born an orphan four years after his parents died.

The baby’s parents, Shen Jie and Liu Xi, had hoped for a child, but had encountered problems conceiving. So they created several embryos in preparation for IVF, which were stored at a Nanjing hospital in deep freeze. Then, five days before one of the fertilized embryos was scheduled to be implanted, the couple was killed in a car accident in 2013.

The couple’s four bereaved parents saw those waiting embryos as their only hope for a grandchild and embarked on a complex legal journey that tested the limits of Chinese law and reproductive technology. First, they had to gain custody of the embryos. There is no legal precedent involving inheriting embryos in China.

After a year of court proceedings, the Wuxi People’s Intermediate Court ruled in favor of the grandparents.

“The embryos left by Shen Jie and Liu Xi have become the only carriers of the bloodlines of both families,” the ruling said, “and so they bear the burden of their grief and spiritual and emotional comfort.”

Next, they had to find a facility that could store them in the proper cryogenic conditions. Since Chinese law forbid the use of gestational surrogates, no hospital could see a legal way to handle the situation. The grandparents then looked outside the country, and set their hopes on Laos, where surrogacy is legal. Since airlines would not permit the liquid nitrogen storage container or board, the embryo had to be driven out of the country by car. A Laotian woman agreed to be the gestational surrogate. The embryo was successfully transplanted into her uterus and grew into a healthy baby boy named Tiantian, who was born in China after the surrogate travelled there on a tourist visa to ensure the child had Chinese citizenship. All four grandparents provided DNA to prove he was their grandchild.

Liu’s mother, Hu Xinxian, said, “Tiantian’s eyes look like my daughter’s but overall, he looks more like his father.”

The grandparents will jointly raise the child. Shen Xinan, Tiantian’s paternal grandfather, said that until Tiantian is older they will tell him his parents are overseas.

“This boy is destined to be sad on his arrival into the world. Other babies have their fathers and mothers, but he doesn’t. We will definitely tell him in the future. How can we not?” Shen said.

The extraordinary case sets a new precedent for handling and inheriting embryos in China. Around the world, countries are wrestling with legal, ethical, and moral complexities raised by advanced reproductive technologies. In the typical IVF scenario, more embryos are created than are implanted, as doctors attempt to maximize the chances of a viable embryo. Not all of those embryos are usable, but some extras do have potential. What happens to the extras in those cases, or if cases where parents die, divorce, or disagree? Do the embryos have rights?

More than a million embryos in the US alone are sitting in cold storage, awaiting a decision on their fate. Some have been there for decades, outlasting the people who created them. Some have been inherited by the adult children of the people who created them. Others are implanted into the womb of the woman who created them in an invasive disposal ceremony called a “compassionate transfer,” at a time of the month when she will not become pregnant. Others are donated to infertile couples who cannot produce their own embryos.

In March 2018, a malfunctioning cryogenic storage tank led to the loss of more than 4,000 embryos in an embryo storage facility in Ohio. In California, low levels of liquid nitrogen at a storage center affected several thousand stored eggs and embryos. Class-action lawsuits involving the individuals whose eggs and embryos were lost are now asking courts to declare the life begins at conception, and therefore the facilities are involved in wrongful deaths.

One couple has asked for a declaratory judgment that “the life of a person begins at the moment of conception” and “the legal status of an embryo is that of a person.”

If an embryo is deemed a person, then the case could have a chilling effect on the IVF industry, and dramatically alter the process and availability of reproductive technology as clinics reduce their exposure to liability. It would also set a legal precedent that life begins at conception, therefore reshaping abortion politics.

Modern Family actress Sofía Vergara was sued by her ex for the right to implant two frozen embryos the couple had created into a surrogate mother. His case: By not being gestated and born, the embryos were being deprived of their right to inherit a trust fund. A contract signed at the time is reported to have stipulated that neither partner could do anything with the embryos without the other's consent. The case was dismissed.

In 2017, a baby girl was born after the couple who created them — in 1992 — anonymously donated the embryo they had frozen more than 25 years earlier. It’s the longest an embryo is known to have been frozen before being born as baby, and in a sense makes the baby one year younger than the woman who gave birth to her.

In Illinois, the legislature is considering a bill that would require insurance companies to cover the freezing of eggs, sperm, and embryos for patients who are facing potential loss of fertility due to cancer treatments.

In Arizona, a new law mandates that in situations where a couple has separated, the embryos become the property of whichever person wants them “to develop to birth.” The case was spurred by a divorced woman who wanted ownership of the seven embryos she created with her then husband. In that case, the court ruled in favor of the husband, stating that his "right not to be compelled to be a parent outweighs his ex-wife's rights to procreate.” However, the case inspired the new law, supported by the conservative Center for Arizona Policy, part of the anti-abortion Family Research Council.

It is opposed by the National Infertility Association, which issued this statement:

“Up to this day and in all 50 states, child custody laws have applied to children who were born and in existence,” the group wrote. “But this legislation would cause Arizona to depart from the rest of the country by making ‘in vitro human embryos’ — frozen and the size of a single grain of table salt — subject to new laws that draw from child custody standards.”

“We don’t know in the U.S. whether embryos are going to be treated as property or not, as children or not, or sui generis, as something different,” said Alta Charo, a bioethicist at the University of Wisconsin-Madison. “That keeps alive a debate around their moral status, their legal status, debates that quickly spiral into the black hole that is the abortion debate.”