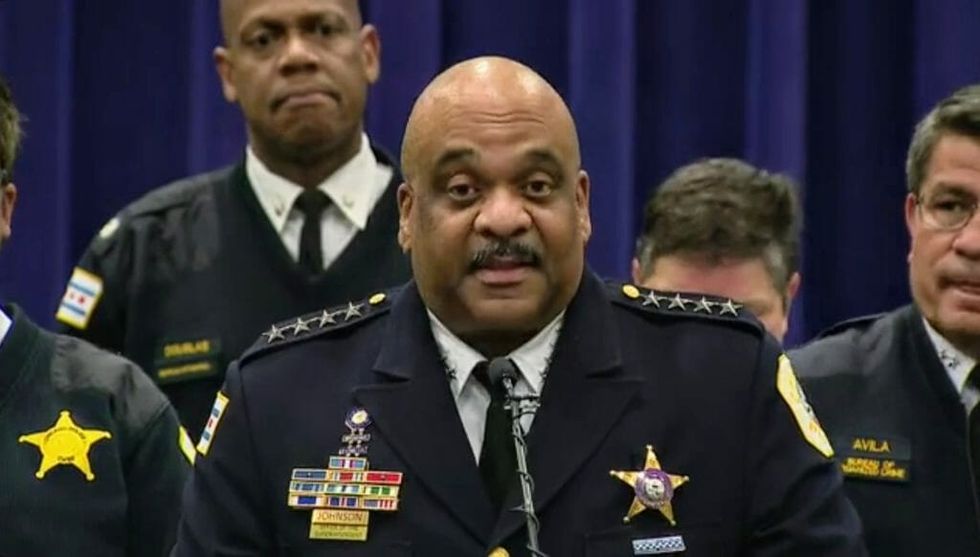 It is no secret that President Donald Trump holds disdain for the city of Chicago and its city government and personnel. On Monday, it was made perfectly clear that the city, which last had a Republican mayor in 1931, returns the sentiment.

Trump was in the city to address the International Association of Chiefs of Police conference attended by police officials from around the U.S. as well as from foreign nations. At the beginning of his speech, the President complained because Chicago Police Superintendent Eddie Johnson chose to attend to the needs of Chicago residents rather than to attend Trump's speech.

"There is one person that’s not here today. I said, ‘Where is he, I want to talk to him'. In fact, more than anyone else, this person should be here because maybe he could learn something."

"And that’s the superintendent of Chicago, police chief Eddie Johnson."

"After all I’ve done—and I’ve done more than any other President—here’s a man that could not bother to show up for a meeting of police chiefs, the most respected people, in his hometown and with the President of the United States.”

"[Chicago] is embarrassing to us as a nation. All over the world they're talking about Chicago. Afghanistan is a safe place by comparison."

While Trump boasted of decreased crime nationally — yet another trend begun during the Obama administration — he failed to recognize Chicago has also seen a decrease.

On Monday afternoon, Superintendent Johnson held a press conference to respond to the President's insults regarding his department's job performance.

Surrounded by members of Chicago law enforcement, Johnson began by stating "facts matter" and in Chicago, people know that.

In his remarks, Johnson added:

"Today the same police officers the President criticized for their inability to protect this city spent all day protecting him."

Of Trump's insults before an international audience, Lightfoot posted:

"It's no surprise that [Donald Trump] brought his insulting, ignorant buffoonery to Chicago. Luckily, in this city, we know the truth and we will not let anyone—no matter how high the office—denigrate who we are as a people or our status as a welcoming city."

"Rather than belittle Chicago's communities with hateful and dishonest rhetoric, he needs to go back to D.C. and face his fate."

She concluded by stating her support for Johnson and contempt for the President's grandiose claims.

"President Trump knows as much about policing as he does running a fair and transparent government. I stand by the Superintendent for living up to the values of this great city and its residents."

People appreciated Johnson and Lightfoot standing up to the President's insults and choosing to reflect the values of Chicago citizens regarding Trump.

Some Trump supporters tried to bolster their leader's points by repeating his misinformation, but were quickly corrected.

@thehill Chicago is the murder capital, not because of cops, but because of Democrats policies over multiple decades.
— Fred (@Fred) 1572292457.0

@thehill It's interesting to see how some people like to use Chicago as some kind of socio-political punching bag a… https://t.co/DIdUg09q6U
— Corey Richardson (@Corey Richardson) 1572292853.0

Johnson also addressed a story told repeatedly by Trump—similar to many others the President tells—regarding an unnamed individual who told the President what he wanted to hear. Johnson said they looked for Trump's mythical Chicago cop, but—like the generals, doctors, firefighters and others who tell the President stories that prove he's right and facts are wrong—this person never existed beyond someone's imagination.

A Trump Tower sits in Chicago, but despite his business ties to the Windy City, the President's former personal lawyer, Michael Cohen, claimed Trump often made racist comments regarding the city's non-White population when they visited the area together.

The book Audience of One: Donald Trump, Television, and the Fracturing of America is available here.