Conservatives Are Spreading a Fake Picture of Hillary Clinton in Blackface, and Chelsea Clinton Just Fired Back 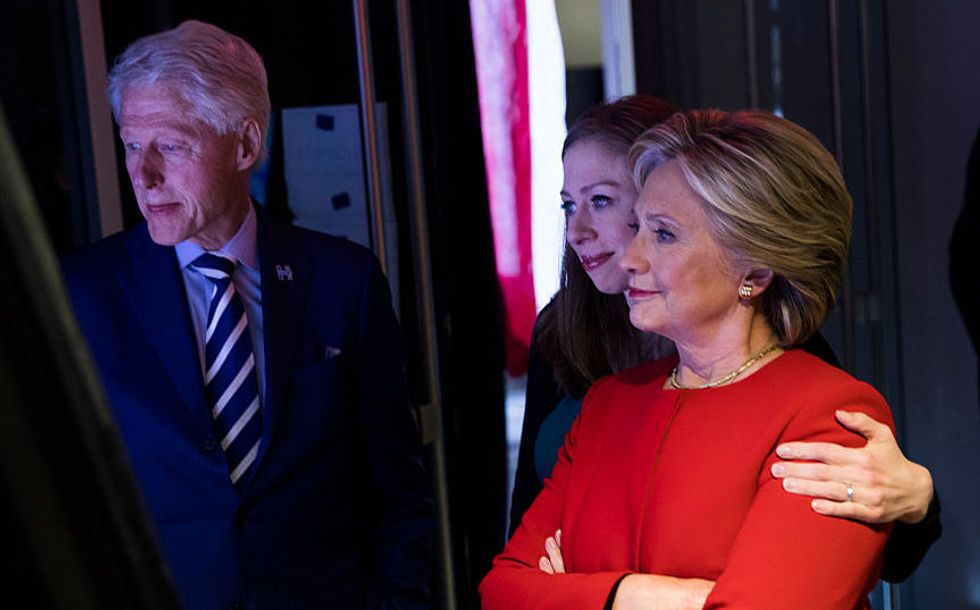 A fake photo purported to be of former Secretary of State Hillary Clinton and President Bill Clinton—with Hillary in blackface—resurfaced on conservative social media in the wake of the Governor Ralph Northam controversy. But now the former first couple's daughter, Chelsea Clinton, is responding to the false claims.

The photo originally spread through links to Imgur, but was deleted after being reported as a site violation. The story went on to be repeated by fake news and conspiracy theory blogs, including InfoWars.

- ⬇️ looks nothing like my parents (the woman’s eyes aren’t even blue).

- Fellow white parents, we need to teach our kids about the racist history of minstrelsy & blackface."

Clinton included a link to the Smithsonian's National Museum of African American History and Culture's page for educational information on the history of blackface in the United States.

Observant people noted a few key things about the photo.

The woman in blackface has brown eyes versus Hillary Clinton's blue. Bill Clinton is 6'2" tall while his wife of 44 years is only 5'5" tall. The people in the picture have less of a height disparity. Plus the man bears only a passing resemblance to Bill Clinton.

People questioned the right's continued obsession with Hillary Clinton who is a private citizen not currently holding or seeking public office.

@samstein @willsommer I just don't understand the boogeyman obsession the right has with Hilary Clinton... This is… https://t.co/P9MQynrMOH
— John Purlia (@John Purlia) 1549489767.0

People also offered their support to the former first daughter.

Chelsea Clinton has seen numerous false allegation based attacks against her mother since childhood.

@red_winer @ChelseaClinton I’ve replied to this when “friends” post it with the link to snopes stating this is fake… https://t.co/Lovm2pnQ8y
— Mary Cunningham (@Mary Cunningham) 1549502036.0

People thanked Clinton for the resources she provided on the history of blackface as well.

@ChelseaClinton Thanks for the link, Chelsea. I am a teacher and will try to work this into discussions this year.
— Ellen Vesey (@Ellen Vesey) 1549495090.0

Many shared their admiration for the grace Clinton always exhibits when responding to such personal attacks on her family based on lies and conspiracy theories.

@ChelseaClinton Dear Chelsea! I am always stunned by the way you react to tweets bad, worse and inhumane. I wanted… https://t.co/zFSbZPMOqs
— Josephin Galla (@Josephin Galla) 1549495317.0

While one person suggested that in addition to calling out blackface, people should also call out other forms of racism with equal fervor.

Chelsea Clinton married Marc Mezvinsky in 2010 and they have two children. Clinton wrote two books, one for young adults and one for children: It's Your World: Get Informed, Get Inspired and Get Going! and She Persisted.