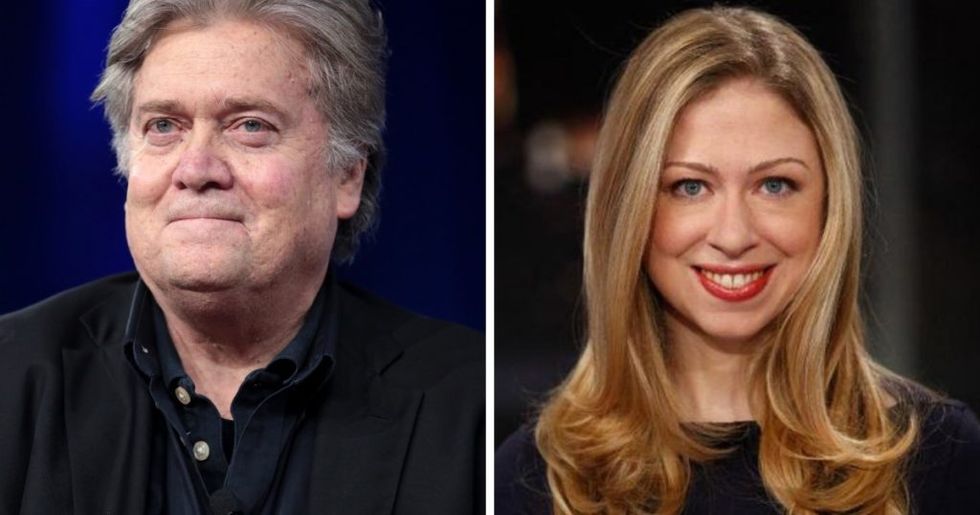 When Chelsea Clinton heard that Steve Bannon, President Donald Trump's former chief strategist, had been chosen to headline this year's New Yorker film festival, she responded, while quoting writer Roxane Gay, that The New Yorker and The Economist were complicit in the "normalization of bigotry."

For anyone who wonders what normalization of bigotry looks like, please look no further than Steve Bannon being inv… https://t.co/PphawiFUmR
— Chelsea Clinton (@Chelsea Clinton) 1535999301.0

Clinton's response referenced Bannon's beliefs, which reflect white nationalism (a label which he has rejected despite criticisms that he had legitimized such policies as a member of the White House). Shortly after Clinton responded to the Bannon controversy, a Twitter user by the name "Deplorable Kristi" accused her of "bullying" Bannon.

It’s almost like Chelsea is bullying Bannon on Twitter. But Democrats are the party of tolerance. 🤔 https://t.co/MdWzxaGlTb
— Deplorable Kristi (@Deplorable Kristi) 1536027460.0

Clinton soon responded, telling the user that "naming prejudice isn’t bullying, nor is it impolite."

Hi Kristi - naming prejudice isn’t bullying, nor is it impolite. And, those of us who have not had to endure “toler… https://t.co/UqJac2vAlj
— Chelsea Clinton (@Chelsea Clinton) 1536027637.0

The response earned Clinton praise across the board.

@ChelseaClinton It’s funny/unfortunate that some are trying the teach you about bullying.. like you aren’t acquainted with the subject 🤦🏻‍♀️
— daphna (@daphna) 1536027782.0

The announcement from David Remnick, the editor of The New Yorker, that Bannon would no longer headline the magazine's upcoming festival came after an exodus of high-profile names who said they would not participate should Bannon headline the event. Like Clinton, these individuals––a list which includes film director Judd Apatow and comedian Patton Oswalt––said allowing Bannon to participate would normalize hate and bigotry.

In an email statement to The Associated Press, Bannon wrote:

After being contacted several months ago and with seven weeks of continual requests for this event, I accepted The New Yorker's invitation with no thought of an honorarium.

The reason for my acceptance was simple: I would be facing one of the most fearless journalists of his generation. In what I would call a defining moment, David Remnick showed he was gutless when confronted by the howling online mob.

"I've thought this through and talked to colleagues — and I've re-considered," Remnick wrote of his decision on Bannon. "There is a better way to do this. Our writers have interviewed Steve Bannon for The New Yorker before, and if the opportunity presents itself I'll interview him in a more traditionally journalistic setting as we first discussed, and not on stage."

A statement from David Remnick, editor of The New Yorker, explaining his decision to no longer include Steve Bannon… https://t.co/TfZNkMDViD
— The New Yorker (@The New Yorker) 1536014588.0

"The point of an interview, a rigorous interview, particularly in a case like this, is to put pressure on the views of the person being questioned," he continued, adding:

There's no illusion here. It's obvious that no matter how tough the questioning, Bannon is not going to burst into tears and change his view of the world. He believes he is right and that his ideological opponents are mere 'snowflakes.' The question is whether an interview has value in terms of fact, argument, or even exposure, whether it has value to a reader or an audience.