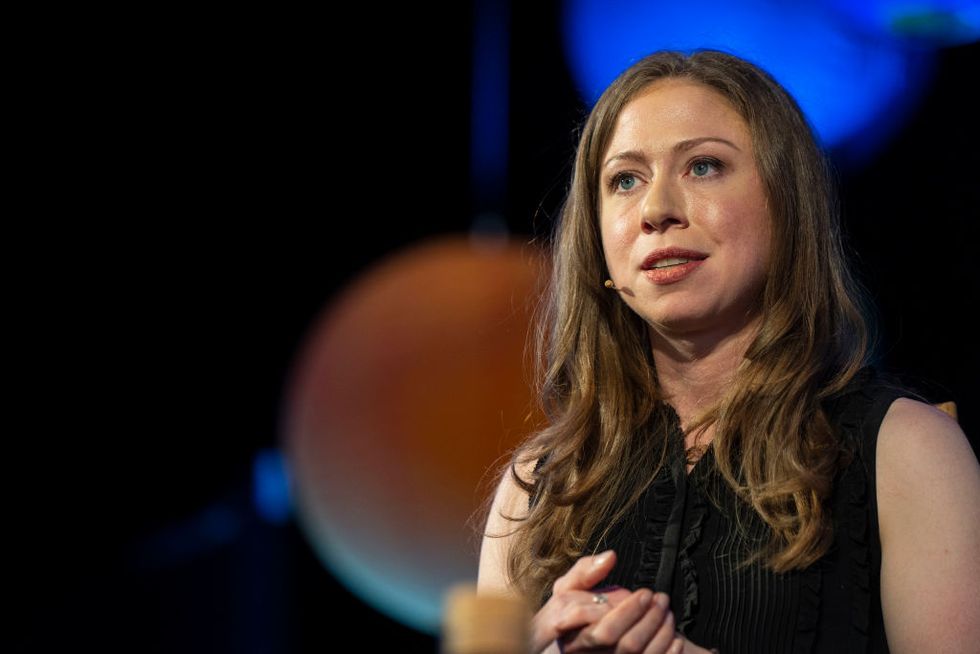 "If you can’t make your point about Judge Kavanaugh, whatever it may be, without bullying his kids, it’s not worth making," Clinton wrote.

The cartoon in question depicted Kavanaugh's daughter, 10-year-old Liza, praying for God to "forgive "my angry, lying, alcoholic father for sexually assaulting" Dr. Christine Blasey Ford, who last week testified before the Senate Judiciary Committee about a sexual assault she alleges Kavanaugh committed against her at a high school party when they were both in high school.

The cartoon was widely criticized for breaking an unspoken but oft-respected rule that individuals not lampoon the children of political figures if they are minors, but responses to Clinton's defense were noticeably mixed, with some pointing out that it was Kavanaugh who claimed during his testimony that Liza had said to her mother that “we should pray for the woman."

@ChelseaClinton I agree but it should be noted that Dr Ford was 15 when she was sexually assaulted. She also wanted to be left alone.
— Delilia O'Malley (@Delilia O'Malley) 1538593014.0

@ChelseaClinton Chelsea, I remember how you stuck up for Barron Trump and the Obama girls, when people were making… https://t.co/GCxbXdZwnp
— vbspurs (@vbspurs) 1538595244.0

@ChelseaClinton Kids are innocent. Bullying them because you don’t like their parents is morally grotesque.
— Eugene Gu, MD (@Eugene Gu, MD) 1538596023.0

Britt has defended the cartoon, saying that it had been Kavanaugh's decision to mention his daughter in public testimony which precipitated its creation in the first place.

“Kavanaugh is the one who ushered his own daughter into the national conversation by telling us his story," Britt said. He added: “The cartoon is not about his daughter — it’s about Brett Kavanaugh’s possible heavy drinking, his anger and his possibly sexually assaulting Doctor Ford.”

“That’s what we do in this business,” Britt said. “I based my cartoon on [Ford’s] testimony — I happen to believe what she said. Her testimony was credible and thoughtful, and that’s why I went where I did.”

Critics objected, however, and multiple people, like the person below, called out the Illinois Times for publishing it.

But the publication soon had to clear the air: The Times clarified that while Britt is a regular freelance contributor to the paper, the newspaper’s name “should not have appeared in the cartoon.” Britt said he routinely includes his affiliation in his cartoons per an agreement with the paper, even if his works are only published by his syndicate.

Clarification regarding the Judge Kavanaugh cartoon by Chris Britt: While Chris Britt is a regular contributor to… https://t.co/5UoUyxDCdD
— Illinois Times (@Illinois Times) 1538414506.0

Britt says that he and his syndicate mutually decided to remove the Sept. 28 cartoon from his Creators.com page, which includes other political cartoons, including one which mocks Kavanaugh's calendar entries.

“I don’t mind people being angry with my cartoons,” he said, though he noted that “posting my home address online and [threatening] me” is another matter entirely. He says he's refused several death threats since the cartoon was published and that he's since filed a report with law enforcement.

Tensions have continued to rise in Washington, and the Senate is set up for a critical vote today on Kavanaugh's Supreme Court nomination, per Senate Majority Leader Mitch McConnell (R-KY), who has been adamant about pushing the vote forward and has, in recent weeks, decried opposition to Kavanaugh's nomination as a calculated "smear campaign" orchestrated by Democrats. McConnell also denied a request from Senate Minority Leader Chuck Schumer (D-NY) for an FBI briefing for all senators, characterizing it as "unprecedented and irregular."

“We will not be intimidated by these people,” Mr. McConnell declared Wednesday. "There is no chance in the world that they’re going to scare us out of doing our duty.”