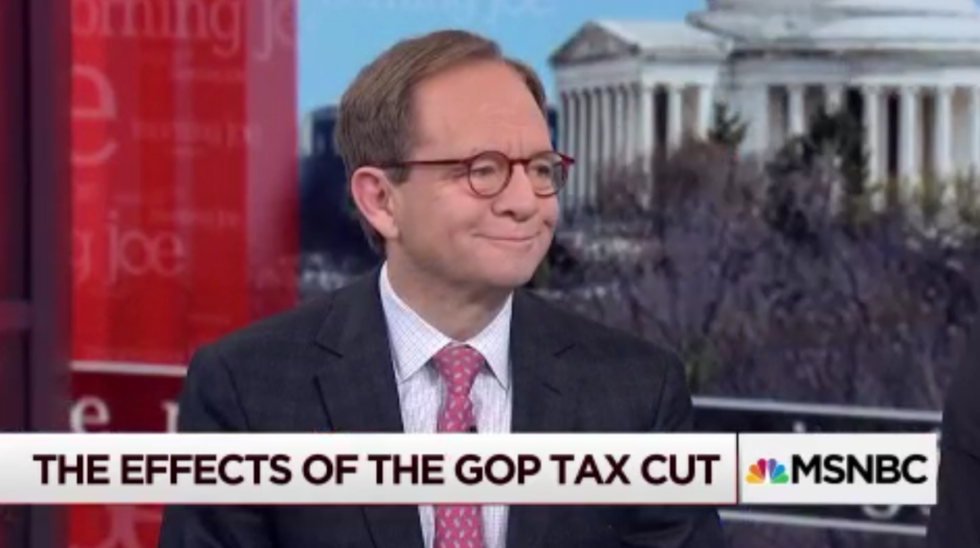 In the 1980s, Ronald Reagan proposed an idea that giving more money to the richest of Americans would ultimately benefit the poorest. The idea , intended to sell Americans on tax breaks for the wealthy during a poor economy, became known as Reaganomics.

No one bought Reaganomics by the end of Ronald Reagan's presidency, and George H. W. Bush paid for that failure, as did the American economy. But the failure of trickle down economics didn't stop it from being recycled as a selling point by the GOP in 2017.

But do Americans believe huge tax cuts for the richest of people and corporations benefit those lower on the income scale? Polling from the recent election in Pennsylvania's 18th congressional district seems to indicate they do not.

During an appearance on Morning Joe on MSNBC, President Barack Obama's car czar, broke down the numbers. Steven Rattner, who worked restructuring the auto industry in 2009 as Counselor to the Secretary of the Treasury, is a renowned veteran Wall Street financier.

Ads touting the Republican tax cuts actually took public support away from the GOP candidate. These are numbers the GOP and President Donald Trump need to study leading up to the 2018 midterms.

Polls prior to the recent election, which saw Democrat Conor Lamb defeat Republican Rick Saccone, in a heavily red district, all indicated voter dissatisfaction with the GOP tax breaks.

The 18th congressional district is not the first district that favored Donald Trump in 2016 to flip blue. However it does seem to indicate a slight change in GOP strategy.

Early campaign ads and appearances praised the Republican tax plan, Donald Trump's signature achievement. But by the end of the Saccone campaign, no one as talking about it, including President Trump.

In his final appearance in Pennsylvania, stumping for Saccone, Trump spoke at length on his proposed tariffs, but failed to mention his former greatest achievement. Perhaps the facts that polls have been trying to convey finally sunk in.

The majority of American voters haven't forgotten Reaganomics. Trickle down theory failed in the 1980s and no one expects it to succeed now.

In addition, businesses made it clear where they will be spending their surplus money. It won't be on worker wages as the GOP claimed.

Companies gave us the heads up – wage increases were not the #1 priority to channel tax-cut related proceeds.… https://t.co/UmeWLnKsUN
— Steven Rattner (@Steven Rattner) 1521109196.0

But will just not talking about their tax breaks for the wealthy help Republicans win in the 2018 midterm elections? We will see in November if a strategy of avoidance works for those members of the GOP who employ it.

On @Morning_Joe today, I discussed how waning support for the G.O.P. tax plan has dovetailed with the company annou… https://t.co/CPRFgMvjl3
— Steven Rattner (@Steven Rattner) 1521124547.0

@SteveRattner Republicans don’t care if polling is down on the tax bill because the goal was to get it passed & dea… https://t.co/KAgxsWdSg0
— JoeCuban (@JoeCuban) 1521118525.0