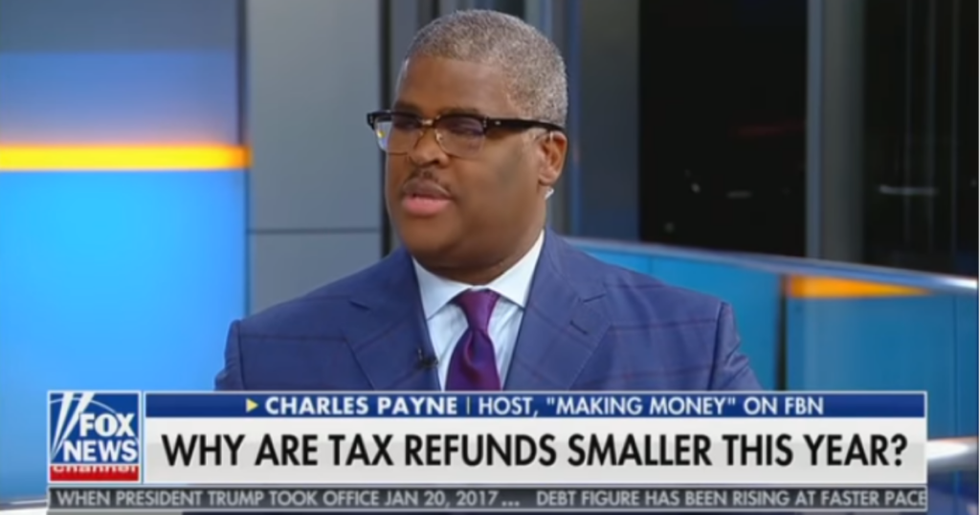 Tax season is approaching and millions of Americans are finding that the Tax Cuts & Jobs Act was not the financial windfall Republicans and President Donald Trump promised it to be.

Fox Business host Charles Payne thinks workers are to blame for failing to change their withholdings and not saving the tiny bits of extra cash they received thanks to the tax law.

“Here’s the thing," Payne said." For the most part, the IRS is telling everyone that they just simply did not make the proper adjustments on the withholding at the beginning of the year. So they have been making all of this money."

Payne said that the IRS “put a lot more memos out” to prevent people from overpaying, and suggested that your everyday John Q. Taxpayer should have known what to do.

“Of course most people didn’t do that," Payne continued.

"While people were obviously seeing fatter paychecks they were still counting on that refund they always got. Which is interesting because, you kind of hinted at it, that we would allow the IRS to have like a $2,000 loan, our money, right? Hold on to it because we overpaid. So people should probably consider making these adjustments anyway, unless you want to give the IRS two or three grand of your money to hold for a year. Maybe they can make the interest on it and you won’t.”

Nice try, but we the people know the real deal.

@thinkprogress They should ask #ShitholePresidentTrump if his tax return is smaller this year. @realDonaldTrump #GOPTaxScam
— Mark Cruz (@Mark Cruz) 1550067453.0

The fact is, most Americans did not see a significant boost to their paychecks because of the tax law.

The Tax Policy Center found that "higher income households receive larger average tax cuts as a percentage of after-tax income, with the largest cuts as a share of income going to taxpayers in the 95th to "99th percentiles of the income distribution."

We are all supposed to be accountants now, apparently.

@thinkprogress Fox:Thank trump for tax relief Me: Thank you for extra cash Me@tax time: what the hell?why do I owe… https://t.co/FcnpuHlEdL
— robert shar (@robert shar) 1550078158.0

@thinkprogress It’s your fault because you didn’t understand the SCAM
— JetOrange (@JetOrange) 1550068360.0

Although the standard deduction for single filers was increased to $12,000, taxpayers may feel a pinch come April because the new tax law drastically reduces itemized deductions, which are beneficial to entrepreneurs and people with dependents. The law also limits deductions for mortgages and student loan interest and health care expenses.

Meanwhile, the ultra-wealthy were given avenues through which they could deduct luxury items such as private jets. Republicans also hope to dismantle the estate tax, which only affects the smallest, richest fraction of the population.