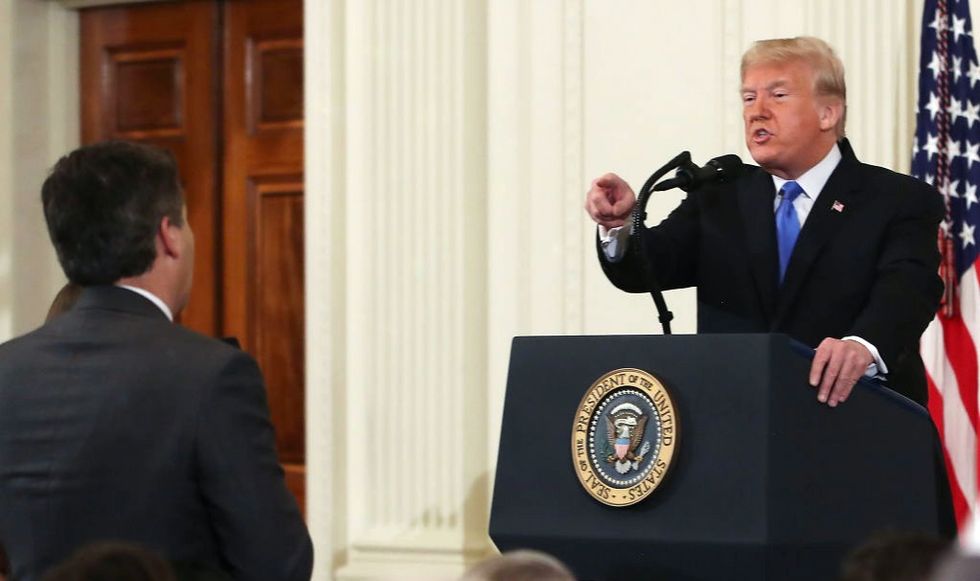 U.S. President Donald Trump gets into an exchange with Jim Acosta of CNN after giving remarks a day after the midterm elections on November 7, 2018 in the East Room of the White House in Washington, DC. (Photo by Mark Wilson/Getty Images)

Melissa Chan is a national and foreign affairs reporter with Al Jazeera. She worked as a broadcast correspondent for Al Jazeera America.

That expulsion from China and revocation of her press credentials led Chan to share her experience on Twitter in the wake of the Trump White House expelling CNN correspondent Jim Acosta. Chan shared that China did the same thing with her in 2012.

As someone who has had my press credentials denied by authoritarian China, I never thought I'd see this crap happen… https://t.co/ZwwT2pI4Em
— Melissa Chan (@Melissa Chan) 1541685405.0

They'll start casting suspicion about not just your work, but your very character. All they need is a whiff of anyt… https://t.co/cebwR5WkUm
— Melissa Chan (@Melissa Chan) 1541685635.0

In a country with a constitutional guarantee of freedom of the press, government attempts to silence certain reporters the President does not like—Trump's own words from his press conference that resulted in Acosta's expulsion—and references to the press as the "enemy of the people" by the leader of that country seem incongruous.

Chan continued with her story of her time living in an authoritarian country where freedom of the press is not the First Amendment of the Constitution.

And that, folks, is how a billion+ people in China live in an authoritarian state. Guess what? You don't feel daily… https://t.co/OnXNzUDuhb
— Melissa Chan (@Melissa Chan) 1541685956.0

While you don't feel daily oppression in an authoritarian country, part of my job was to see what happened when the… https://t.co/z4eHHvWvWT
— Melissa Chan (@Melissa Chan) 1541686035.0

BY THE WAY WHITE HOUSE REPORTERS: Something foreign correspondents in places like Beijing and Moscow have learned:… https://t.co/TSZKdi9nG7
— Melissa Chan (@Melissa Chan) 1541687864.0

Her words and first hand experience with an authoritarian government's handling of the press resonated with people.

Others felt the Trump administration's relationship with the press does not conform with the vision the constitution and First Amendment held.

Others with firsthand experience with dictators chimed in as well.

@acraftyarab @melissakchan @Acosta Bless you for making it out of that situation- sorry to see the times we are rel… https://t.co/BgIhGHbAel
— Tracey Claybon (@Tracey Claybon) 1541689521.0

People also likened the President to a narcissist.

On Thursday afternoon, after drawing criticism over sharing an altered video of Jim Acosta to justify his press access revocation, Sarah Huckabee Sanders stated the White House stood behind their decision.