For many, Trump's comments on Monday were too little too late. 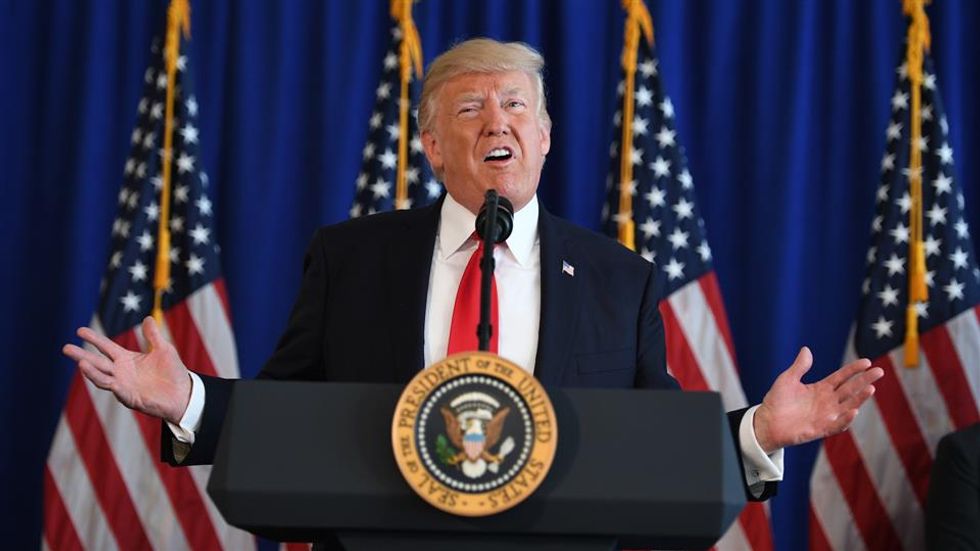 Three chief executives from top American companies have resigned from President Donald Trump's American Manufacturing Council after his tepid initial response to the violence which took place over the weekend at the "Unite the Right" rally in Charlottesville, Virginia.

Brian Krzanich, the CEO of Intel––one of the world's most important manufacturers of computer chips––announced his resignation in a late night blog post.

"I resigned to call attention to the serious harm our divided political climate is causing to critical issues, including the serious need to address the decline of American manufacturing. Politics and political agendas have sidelined the important mission of rebuilding America’s manufacturing base," Krzanich wrote.

He continues: "I have already made clear my abhorrence at the recent hate-spawned violence in Charlottesville, and earlier today I called on all leaders to condemn the white supremacists and their ilk who marched and committed violence. I resigned because I want to make progress, while many in Washington seem more concerned with attacking anyone who disagrees with them. We should honor – not attack – those who have stood up for equality and other cherished American values. I hope this will change, and I remain willing to serve when it does."

“Under Armour engages in innovation and sports, not politics,” Plank said in a statement.

His decision prompted the president to lash out at him later in the day.

“Usually, certain niceties are observed to smooth over a rupture,” says William Galston, a senior fellow at the Brookings Institution, who notes that he can't “think of a parallel example” of any president responding as viciously as Trump to a CEO departing an advisory council. “We’ve learned that as president, Mr. Trump is behaving exactly as he did as a candidate. He knows only one mode: When attacked, hit back harder.”

Trump's first official statement on the demonstration––which resulted in three deaths and injuries of numerous others––came three days after it first began.

“Racism is evil,” the president said after two days of unequivocal statements. “And those who cause violence in its name are criminals and thugs, including the K.K.K., neo-Nazis, white supremacists and other hate groups that are repugnant to everything we hold dear as Americans.”

Trump spoke after meeting with newly installed FBI Director Christopher Wray and Attorney General Jeff Sessions, and acknowledged that the Justice Department has opened a civil rights investigation into the death of Heather Heyer, the woman who was killed after she was struck by a Dodge Challenger driven by James Alex Fields, who had traveled to the city from Ohio to protest at the rally with fellow white nationalists.

Trump's statements were widely condemned as too little, too late across social media.

Odd how @POTUS doesn’t hesitate for a second to attack CEO of #Merck, yet balks at calling out avowed white supremacists for what they are.
— Jackie Speier (@Jackie Speier) 1502725100.0

Trump's statements prompted David Duke, a white nationalist and former Imperial Wizard of the Ku Klux Klan, to accuse members of the media of coercing the president into making his statement.

It's amazing to see how the media is able to bully the President of the United States into going along with their F… https://t.co/WLaQh8f7Qm
— David Duke (@David Duke) 1502731893.0

In a Periscope video shortly afterward, Duke said, “President Trump, please, for God’s sake, don’t feel like you need to say these things. “It’s not going to do you any good.”

Over the weekend, Duke had publicly urged the president not to repudiate white nationalists, a group which had proven itself pivotal to his electoral win.

The Southern Poverty Law Center described the “Unite the Right” rally as “the largest hate-gathering of its kind in decades in the United States,” attracting “a broad spectrum of far-right extremist groups – from immigration foes to anti-Semitic bigots, neo-Confederates, Proud Boys, Patriot and militia types, outlaw bikers, swastika-wearing neo-Nazis, white nationalists and Ku Klux Klan members – all of whom seem emboldened by the Trump presidency.”