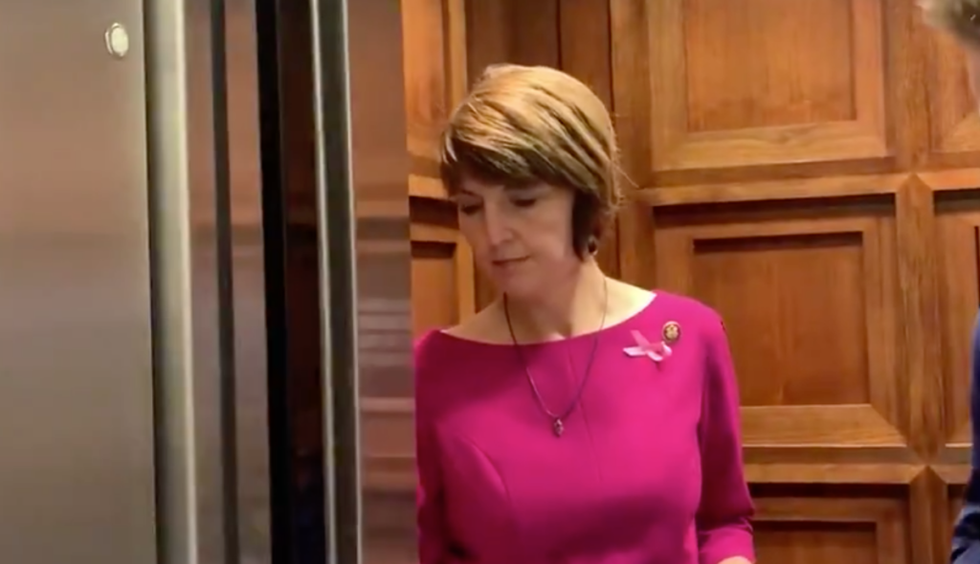 Since announcing his presidential bid in 2015, President Donald Trump's entanglements with foreign governments have given pause to Americans across the country.

Most recently, the President pressured Ukrainian President Volodymyr Zelensky to open an investigation into Trump's political rival, former Vice President Joe Biden and his son, Hunter. According to testimony from Ukrainian Ambassador William Taylor and others, the President withheld a Congressionally approved military aid package to Ukraine on the condition that the investigation was publicly announced.

Nevertheless, the vast majority of Republican lawmakers are standing by the President. Among the most recent to do so was Congresswoman Cathy McMorris Rodgers (R-WA).

A reporter repeatedly asked the Congresswoman:

"Do you think it's OK for the President to pressure foreign governments to interfere in our elections?"

The Congresswoman ignored the reporter's questions by first taking a "phone call," then ducking down a flight of stairs, and finally jumping onto a members-only elevator.

NEWS: Republican Congresswoman @cathymcmorris (WA) refuses to admit that foreign interference in our elections is i… https://t.co/p6FV3DiucT
— MoveOn (@MoveOn) 1572450716.0

@MoveOn @cathymcmorris So you don’t understand that our sovereignty is dependent on not having outside influence in… https://t.co/GtaKVPSJ5j
— Dazy Jane (@Dazy Jane) 1572454566.0

@MoveOn @stellaaaa @cathymcmorris Stay silent and hope it all goes away is not a tactic that is going to play out for very long.
— Mshellart (@Mshellart) 1572451681.0

In the past, Republicans have maintained that soliciting foreign election interference is wrong, but as evidence against Trump continues to pile up, many are going to lengths just as laughable as McMorris Rodgers's to avoid the question.

The answer used to be easy.