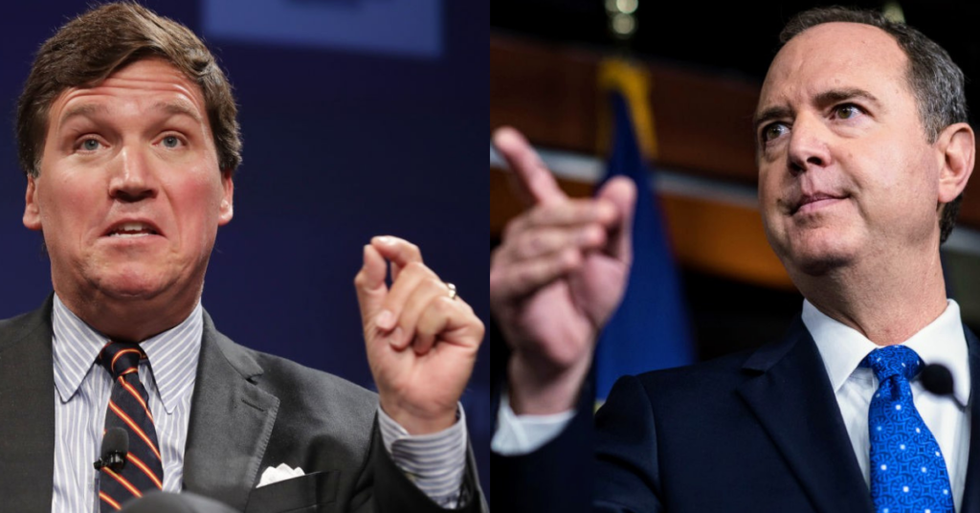 After claiming "you don't get on television unless you say extreme and mindless things" with an apparent lack of awareness of the irony...

"He recently went into a kind of trance and delivered his own prophetic version of what he believed must have happened between President Trump and the President of Ukraine.”

Carlson then played a clip of Schiff from the hearing. The Fox News host added the oddly specific:

“Keep in mind, that isn’t some guy babbling in the men’s room at Starbucks, that is the man who chairs the mighty House Intelligence Committee."

“We trust him with the most sensitive information and yet he is clearly, demonstrably mentally ill." While Carlson's theatrics and deliberately obtuse understanding of President Donald Trump's actions may have played well to the faithful, few others were fans.

For Fox hosts and programs that are closely associated with the Trump family and administration—giving them airtime free of challenges regarding false statements such as Sean Hannity, Tucker Carlson and Fox & Friends—the possible impeachment of Donald Trump could impact their own programs and careers.

@thedailybeast When Trump goes down for his abuse of power and betrayal of our national security, I hope you go dow… https://t.co/uqxykAtYjA
— Sam (@Sam) 1569550157.0

And desperation is never a good look.

The book The Fifth Risk is available here.

"What are the consequences if the people given control over our government have no idea how it works?"