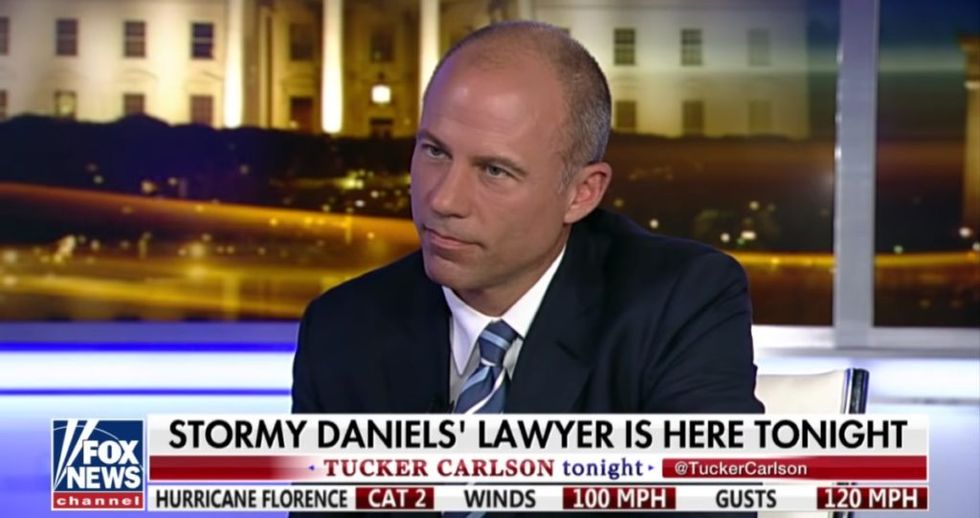 The term chyron refers to the electronically generated caption superimposed on a television or movie screen. Most of us have seen them, but not known what they are called. The term originated in the 1970s from Chyron Corporation, the original creator.

The blurbs flashed at the bottom of live news broadcasts help identify the program, a specific guest and any other pertinent information. Or in the case of Fox News and Tucker Carlson, they provide an opportunity to draw criticism for being childish and petty.

Michael Avenatti—lawyer for the dancer, screenwriter, director and actress who prefers use of her stage name, Stormy Daniels—agreed to appear on the Fox News program, Tucker Carlson tonight. Carlson, like many of the conservative commentators at President Donald Trump's favorite network, frequently insults or denigrates Daniels or her lawyer.

But Carlson—in an address directly into the camera lens—stated how much he appreciated anytime someone agreed to appear on his program. Carlson then vowed not to refer to Avenatti with "a certain unflattering nickname."

Then, as that vow left Carlson's mouth, the unflattering nickname appeared in the chyron below Avenatti and Carlson's images. In all caps, it read:

While the appearance itself devolved into the sort of shouting match one would expect from the maturity level of the chyron, Avenatti still took to Twitter to call out Carlson for his lack of integrity. Carlson promised one thing, while the screen for his television show did the opposite of his on-air vow.

The extent there was any doubt as to the lack of professionalism of @TuckerCarlson or @FoxNews before tonight, ther… https://t.co/tz54g48Rbj
— Michael Avenatti (@Michael Avenatti) 1536894671.0

Yes. After he told me that he was not going to engage in “name calling.” This is why so many people correctly concl… https://t.co/Gkh7Fdo1TZ
— Michael Avenatti (@Michael Avenatti) 1536887137.0

Many echoed Avenatti's sentiments and tagged Carlson and Fox when they did.

@MichaelAvenatti @TuckerCarlson @FoxNews Avenatti had the guts to face off against the propaganda machine. The appe… https://t.co/yfmkgdBMcy
— Pdawg (@Pdawg) 1536927701.0

Others went directly to Carlson and Fox News with their criticisms over the choice of chyron.

People went back and posted on Carlson's Twitter announcement promoting the upcoming interview and many included the same altered image they shared with Avenatti featuring a very different spin of the Fox News chyron.

She is a successful business woman in a profession that is legal and regulated who leveraged herself to work both on camera and behind the scenes. At the time of the alleged 2006 affair, Daniels was 27 years old and newly divorced. Donald Trump was 60, married for a year to First Lady Melania, with a newborn son at home.

How exactly is that banner appropriate or professional? @TuckerCarlson should apologize to @MichaelAvenatti https://t.co/65Pk9icyFd
— VBTheWise (@VBTheWise) 1536917420.0

@MichaelAvenatti @TuckerCarlson @foxnews @rupertmurdoch This is beyond shameful. This is beneath the dignity of jou… https://t.co/5M9xA7xmGU
— Brian Germann (@Brian Germann) 1536887324.0

While others saw it as an indictment of the man Carlson and many on Fox News fiercely defend, President Donald Trump.

@MichaelAvenatti @TuckerCarlson Why do you think trump has never tweeted about @MichaelAvenatti. Because he’s scare… https://t.co/GjtUsTeWP2
— Tommy Igoe (@Tommy Igoe) 1536901449.0

Daniels filed a defamation lawsuit after statements the President and his former fixer Michael Cohen made. Cohen infamously plead guilty to breaking several laws in relation to a $130,000 payment just before the 2016 presidential election.

Trump and Cohen both originally publicly denied the payment made on behalf of Trump to Daniels to buy her silence about an alleged affair.