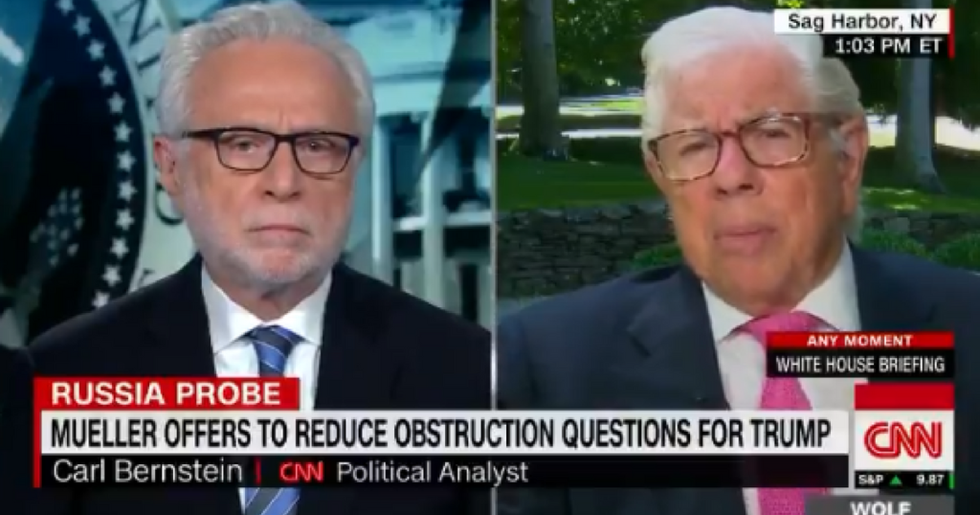 Veteran investigative journalist Carl Bernstein issued a warning to the American public during a CNN interview on Thursday, emphasizing that the deepening scandal surrounding President Donald Trump's alleged entanglements with Russia are "worse than Watergate."

As Bernstein tweeted on Friday:

In 1972, Bernstein and colleague Bob Woodward wrote an explosive report in the Washington Post documenting a break-in at the Democratic National Committee's offices inside Watergate Hotel in Washington D.C.

That story led to an investigation which found Nixon not only knew about the crime but willingly participated in its coverup. Nixon won reelection in 1972 and then resigned in 1974 under the threat of impeachment. He was pardoned by President Gerald Ford shortly thereafter.

Blitzer asked Bernstein if President Richard Nixon was as "anxious publicly" during the Watergate investigation as Trump appears to be amid the probe into his alleged ties to Russia.

"First, I think we're seeing more than anxiety on the part of Donald Trump," Bernstein told host Wolf Blitzer. "We are seeing a president who is behaving and acting unhinged."

"Nixon did not really publicly act unhinged," he recalled. Bernstein added that "the system worked" during Watergate, noting: "Nixon did not publicly declare the press an enemy of the people." Bernstein then said Trump "whipped up a kind of hysteria unlike any other president in our history."

I think it's time to recognize that what we are watching in the Trump presidency is worse than Watergate.

Bernstein blasted today's Republicans for "doing almost everything they can to impede and undermine a legitimate investigation."

The segment concludes with a blistering takedown of Trump, with Bernstein calling him a "demonstrable authoritarian in terms of his rhetoric... Nixon did not do anything similar to that."

Twitter users overwhelmingly sided with Bernstein, echoing his assessment of Trump and his dictatorial behavior.

@CNNnewsroom @JoyceWhiteVance Yes because it’s happening in front of our eyes and the Republican party that’s in control are complicit
— Chrissy Chris (@Chrissy Chris) 1533247878.0

@CNNnewsroom I respect Mr Bernstein and his role in protecting the USA, but my response that quote is still: No sh*t.
— #ImpeachTrumpNOW (@#ImpeachTrumpNOW) 1533242824.0

"Bernstein is a hero."