Conservative Commentator Candace Owens Is Getting Dragged for Questionable Comments About Hitler, and Just Released a Video to Explain Herself 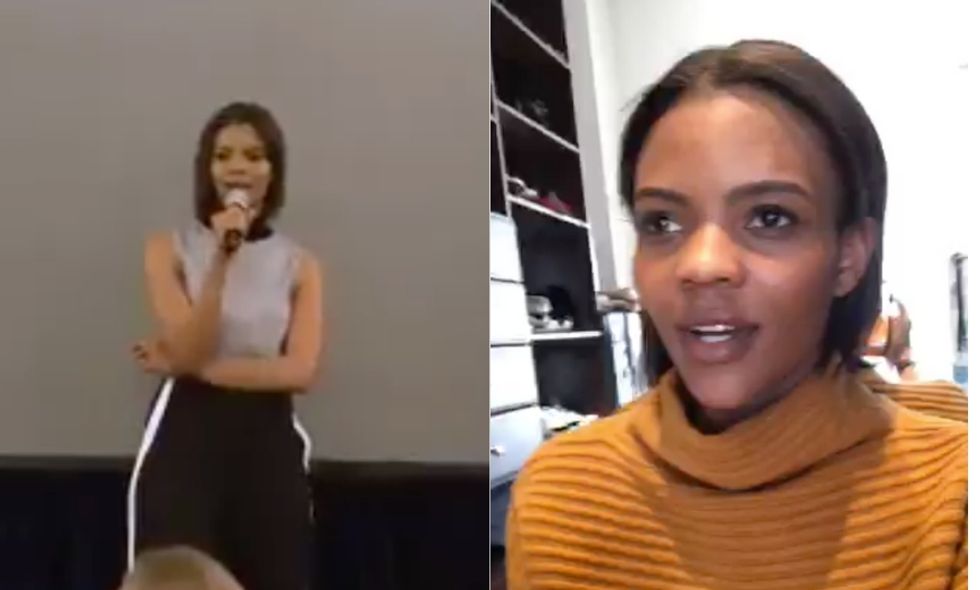 Frequent Fox News guest and conservative commentator Candace Owens has come under scrutiny after video of remarks she made about Adolf Hitler’s plan for Germany, describing it as initially “O.K.," during an event launching the British chapter of conservative group Turning Point USA resurfaced online.

"I actually don’t have any problems at all with the word ‘nationalism.’ I think that the definition gets poisoned by elitists that actually want globalism. Globalism is what I don’t want. ... Whenever we say ‘nationalism,’ the first thing people think about, at least in America, is Hitler. You know, he was a national socialist, but if Hitler just wanted to make Germany great and have things run well, OK, fine,” she said at the time.

Condemnation rained down on Owens as soon as her past comments began to circulate online.

Me: whew looks like Black History Month Day 8 just might squeak by without a — Candace Owens: *grabs mic* I HAVE SOME THOUGHTS ON HITLER
— Eric Haywood (@Eric Haywood) 1549648739.0

The question of how Owens would explain herself was bound to nag on people's minds. She soon responded with a brand new video in which she said she stood by her original statements.

Owens said she had tailored her response to a question an audience member at the event asked her about nationalism. She said she felt the urge to respond thoroughly, because "nationalism is conflated with, for some reason, Hitler."

"The only interpretation people in America seem to have is they instantly think of Hitler and I think that's really, really wrong and that we almost have to correct the record on that. I don't view nationalism or believing in the sovereignty of your nation first, like Trump employs an 'America First' policy, [Jair] Bolsonaro employs a 'Brazil First' policy... when the sovereignty of your nation is being threatened by outside forces, it's very important that we stand on our own two feet and say that we are going to put our nation first, so I answered the question and said to them just that, which is that people wrongly conflate the word nationalism to mean Hitler.

Hitler was a national socialist, but in my interpretation or from my understanding I would make the argument that he wasn't a nationalist. I would make the argument that he was a homicidal, psychotic maniac who was bent on world domination outside the confines of Germany, and he wouldn't say that he was a nationalist because he wasn't about putting Germans first: There were German Jews he was putting in camps and murdering. He was a mass murderer.

So that's the argument I was making on stage, that this man by no means could be considered a nationalist. Everything he did was just being a psychopathic murderer hellbent on world domination."

Owens added that she doesn't believe Trump (let alone Bolsonaro) intend to "conquer the world" but that the two are "employing" a type of nationalism that is "desperately needed in times like this when you have people trying to globalize our economy and we're seeing that America has been hurt by it and other nations have been hurt by it."

Owens's rationalizations were met with derision.

At least one person pointed out the antisemitic implications of the word "globalist," highlighting a rather ironic bent in Owens's response.

@RealCandaceO Nationalism as practiced by Hitler and American nationalists is all about ethnic purity and reducing… https://t.co/9yMk2eO666
— richard_thunderbay (@richard_thunderbay) 1549655382.0

@RealCandaceO Of course Hitler was a nationalist. To contend otherwise is pure drivel, that isn’t supported by Hist… https://t.co/hjDPYArXGD
— Michael Hollis (@Michael Hollis) 1549652223.0

President Donald Trump has often characterized his approach to the American economy as a rebuke against globalism. In October, he attacked “globalists” who he said are working with foreign countries to “cheat” American workers.

“They’re called globalists. I like the globe too, but we have to take care of our people,” he said at the time.

Turning Point USA has not responded to requests for comment. Owens is the group's Director of Communications.