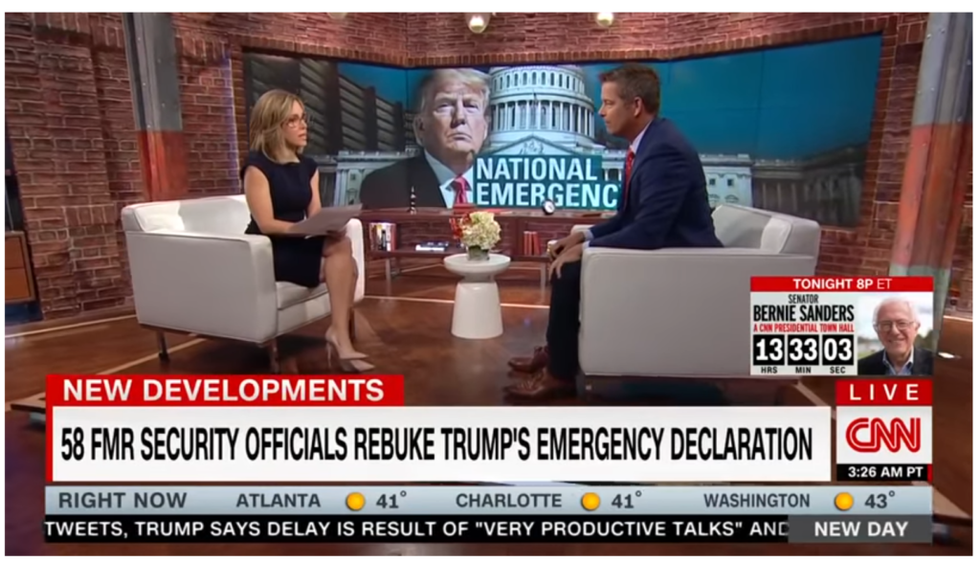 After President Donald Trump declared a national emergency to bolster support for a barrier at the southern border, Republican lawmakers are scrambling to defend the decision that many find indefensible. Congressman Sean Duffy (R-WI) is among them.

CNN host Alisyn Camerota challenged the move during a segment with Duffy (R-WI) on Monday morning. Duffy claims the country needs the wall to because people in Wisconsin are dying from heroin overdoses, and Camerota wasn't buying it.

"You think that the 10 percent of heroin that’s coming through the southern border—not through legal ports of entry—you think that’s going to cure your drug problem in Wisconsin?" she asked.

Many commended Camerota's unflinching line of questioning and how it exposed the holes in Duffy's argument.

Northern Wisconsin's Meth problem is cooked in our own backyards, our Opioid problem was created by the pharmaceuti… https://t.co/k6ysghBR8q
— Jolee Walker (@Jolee Walker) 1551107611.0

Duffy is from my state but, thank god, is not my congressman. What a rambling mess. GOP lawmaker flails wildly afte… https://t.co/D4uQ1Q1Idp
— NancyRMiller (@NancyRMiller) 1551118445.0

Duffy claimed that illegal immigration has devastated his community, saying that rural Wisconsin is running out of money for out-of-home placements for children without parents, which he blames on drugs.

"Are you telling me that we have a secure border?" Duffy asked.

"I’m telling you," said Camerota, "you don’t declare a national emergency on what you don’t know."

Duffy (predictably) blamed Democrats for forcing the President's hand in declaring a state of national emergency, saying "They've all supported a wall in the past. I don't know why they're not doing it today."

@Mediaite How is Sean Duffy in Congress? These Trumpers can't answer questions when challenged with facts? The GO… https://t.co/XXXMXyfwUw
— Russell Drew (@Russell Drew) 1551098791.0

A border wall isn't the same as securing legal points of entry, and Camerota wasn't going to let him forget. Duffy should really check his facts before he goes on national news.